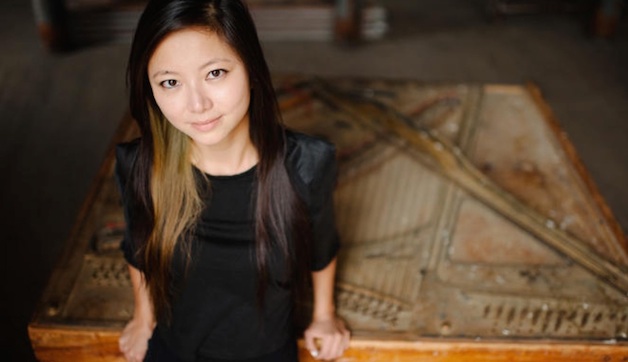 Like all art, music can entertain us, distract us, soothe us, challenge us to see the world differently and affect us in myriad other ways. Far too often we push music to the background, or sever it from the social and political contexts we inhabit. The opening piece of Vicky Chow’s San Francisco debut, Remi Siu’s Foxconn Frequency (no.2) —  for one visibly Chinese performer, brought music’s potential to question, protest, and voice injustice to the foreground. As evinced from the title, the music was inspired by the Taiwanese contractor that manufactures Apple’s popular electronics and other consumer goods. Workers there endure harrowing conditions to fulfill demand while keeping profit margins high. An excerpt from a poem by Xu Lizhi, a Foxconn worker who gained international attention after his suicide in 2014, serves as the structural and emotional anchor of the piece, its English translation revealed only at the very end:

All that I’ve swallowed gushes forth from my throat
Unfurling on the land of my ancestors
Into a disgraceful poem."

The piece requires the performer to attempt complex “tasks” at the keyboard, most of which come in the guise of impossibly hard exercises — a deliberate nod to the rigors of classical music pedagogy in the Chinese Conservatory system. The electronic piano is connected to a computer program that monitors and evaluates the pianist in real time. A “proficiency” score is prominently displayed for all to see, falling from a perfect “100” for every tiny, imperceptible mistake. In the performance, all of this happened in a kind of acoustic disconnect—the keyboard was only audible through the clicking of its keys, while a maelstrom of electronic sounds (including what sounded like electronic regurgitations of previous attempts) evoked the din of an infernal assembly line.

Chow failed, and then failed again, each time forced to repeat a given exercise until achieving the desired mastery. The computer seemed awfully temperamental, often failing the student as soon as she touched a key. From an audience perspective, the piece conveyed a deep sense of dread, augmented by the voyeuristic guilt of observing the attempts from a multitude of angles (thanks to a camera placed on the keyboard itself), and by the empathetic anxiety of imagining oneself in Chow’s predicament. It shone a stark light on the injustice and absurdity of an economic system supported by so many, including the composer, the performer, and me — all using Foxconn-manufactured goods to realize the piece, or in my case, write about it. The question, however, remains: What are we willing to do to promote actual change?

In the second half of the program, Adam Basanta’s this machine breathes to the rhythm of its own heartbeat continued the exploration of the human-machine relationship, albeit in much less oppressive terms. A prerecorded voice introduced piano and pianist as individual machines, who combined to form the mechanical entity in the title. The employment of two transducers, live electronic processing, and a variety of mechanical “exciters” applied directly to the piano strings contributed to blurring the line between the pianist’s action, the piano’s sounds, and the electronics, synthesizing a remarkably complex and compelling sonority.

Earlier in the evening Andy Akiho's Vick(i/y), for partially-prepared piano, was similarly successful when it blended the sonorous with the noisy: The composer’s decision to leave several notes free from preparations provided a broader melodic and harmonic palette to complement the more typically percussive effects produced by this enduring brainchild of John Cage’s. The music’s affect, however, erred on the popular side, with layered ostinatos that could have been called grooves in another life.

Chow’s performance of these pieces was impeccable if not particularly flashy, due entirely to the idiosyncratic nature of the program. She finally got a chance to showcase her chops in a buoyant rendition of Reich’s Piano Counterpoint, an arrangement for soloist and prerecorded tape of the eminently impractical Six Pianos. Reich had considered naming the piece Piano Store, in a nod to the venue where compositional sketches and initial rehearsals took place. As is typical of Reich’s pieces since Drumming, the melodic content appears by filling out beats with additional, faster divisions on each repeated section. Sudden shifts in harmony marked the music’s three main sections, which unfolded seamlessly to provide the kind of continuity — and a degree of aural solace — that had been scarce in the program until that point.

The concert was presented by Permutations, a performance series founded and curated by Karl Larson and Ravi Kittappa, organizing concerts of contemporary music in New York City and the San Francisco Bay Area.