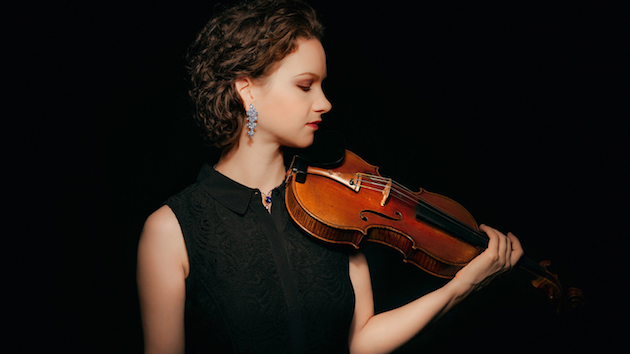 In a life filled with noise and busily creating music that is inherently sound constantly moving through time, it’s little wonder that putting her ears on hold or freeze-framing an image to admire its beauty or craft is desirable.

“I never have no sound in my head,” she says in an interview. “I always hear music playing or voices of podcasts I’ve listened to, or my own recordings. It might surprise people that I like silence, but sometimes, I need space so they’re not so jumbled.”

Perhaps a visit to a museum would provide respite, but even artwork sets her brain to rumbling, her mind humming busily. “With music, if you stop to examine a detail, the music stops. In a museum with visual art, I can go closer and closer to a painting and see it up close without it changing.”

And Hahn’s woe is sure to rise in situations when sounds are superimposed on a visual environment. “My ears are never off, so it’s exhausting,” she says. Except when uncontrolled noise and movement combine, like during a recent afternoon at a friend’s home where the chatter and boisterous running around of two girls age 5 and 4 she recalls was a sight to see and loud, but “really great and exciting.”

And so it goes with a three-time Grammy Award-winning artist: craving rest, but chasing stimulation.

Bringing to Davies Hall a solo recital on April 26 featuring selections of six new partitas she commissioned from Antón García Abril, a Spanish composer who contributed to her Grammy-winning recording, In 27 Pieces, the concert includes Mozart’s Violin Sonata in G major, Bach’s Violin Sonata No. 3 in C major, Copland’s Sonata for Violin and Piano, and Tina Davidson's Blue Curve of the Earth. Hahn appears with her pianist collaborator Cory Smythe.

Hahn says every duo discovers particular ways of rehearsing and performing together. “Cory has a clarity, honest and open, to his playing. He thinks about his craft. I appreciate that. It’s good to work with someone who you can ask a question and get an answer you don’t expect.” An unexpected interpretation from Smythe might cause Hahn to dig deeper, perhaps to recognize a surprising sparseness in a “thick pile of writing” in a Mozart sonata or to find the overarching lyricism in a polyphonic passage she might first think is simply complex.

Similarly, commissioning new works for solo violin is a genre- and mind-expanding endeavor. Abril’s partitas she says are a reflection of his character — charming, endearing, inspirational — but also demand investment beyond technique. “The notes on the page are just the start: he wants you to delve into the drama, to take a chance. ‘Free’ in the notations (on the score) sometimes means rush in, go with it. Other times, it means calm, take your time. There’s irregularity. There’s push and pull. Within each line and with the way the music passes from one line to the next, there are a lot of aspects to highlight.” 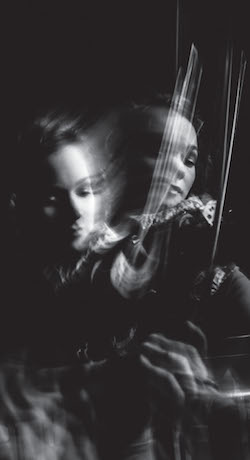 If being a musician has taught Hahn anything, it’s to embrace fear. Having performed regularly since age 12, when she made her major orchestra debut, commanding a career with the momentum of a roller derby skater, and approaching social media with unbridled enthusiasm on her website, YouTube channel and more, Hahn doesn’t suffer stage fright and even seems to thrive on exposure. A composer whose work terrifies her she says can “shape-shift” from intimidating to natural; a piece that one day feels awkward or unwieldy can suddenly feel like second skin. “That’s why I like encores, because you can (choose them in the moment) and pick what feels right that day.”

The act of writing — Hahn regularly posts journal entries and articles she’s written on her website — stretches her into frustration. “I’m not a writer and I don’t have a method, but I like processing thoughts. Liner notes or articles are frustrating to begin, but actually doing them, you learn things. It’s creative. I like anything creative.”

And anything can be improved, a lesson learned early on in her career that she holds close her heart. “I was brought up to not assume that something is ever done. I’m always thinking, what can be reframed or reexamined?” Turning the same lens upon herself, Hahn says longer associations, like the year with Vienna Konzerthaus in 2015–16 or an upcoming residency with Seattle Symphony, allows new connections and surprising associations between music and other things to flourish. “I make sure residencies are specific to place. I get ideas from brainstorming sessions. Working over time with an organization, we can do things I can’t do singlehandedly.” As artist-in-residence in Vienna, Hahn played during a knitting circle and accompanied a community dance workshop.

“I took dance classes at one time and loved the feeling of extension. I’m looking for that same thing in the music. What are the references? How do I get from what I’m playing to what I want to convey?”

Given that music is rarely silent or still, Hahn each day makes the only choice available to a musician in love with the art form: make noise — gorgeous, highly crafted, ever-evolving sound — and never stop moving forward.