Soprano Patricia Racette is in town for an important role debut: She’s singing all three soprano leads in Puccini's Il trittico at San Francisco Opera, a feat only a few have tried. She took time out from rehearsals to talk about her career, her plans, and her life with mezzo-soprano Beth Clayton, her partner of many years.

Tell us about San Francisco Opera’s Merola and Adler programs and their importance in your career.

This is my home company, and I consider this my home audience. This is the place where it all began for me. I was so young and so green when I started 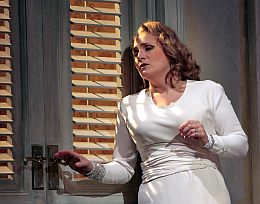 out. I have a very special place in my heart for this opera house.

What was it like for you to be in The Letter, Paul Moravec's new opera?

I loved doing it! It was a great experience. It started well over a year before, when I first met with Paul and librettist Terry Teachout. They were familiar with my work, but wanted to know what would suit me best. They were incredibly generous in their willingness to be collaborative, so we were able to collaborate down to the dramaturgical choices.

Of course, I am not the composer or the librettist, and it is not my job to have an overview of the piece. My job is to know my character and know how the character relates to others. They were very receptive to some of my suggestions. One was that I said you need an aria for the protagonist. We need to see something other than a monster, we need to see some introspection. And you want your protagonist to have an extractable aria. They were very receptive. It really was a rich, interesting experience; it was great.

What about all the new roles you’re doing this year?

New roles are my theme! Starting in May and through December, I'm only doing works that are new to me. My brain is sufficiently saturated, I have to say! And they’re huge pieces. I had to cancel because of illness, but I learned the Verdi Requiem. I did a Dvořák concert with the Chicago Symphony, all new music. 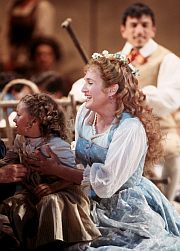 The Letter was difficult, not easy to learn, and even harder to memorize, which is never an issue for me. It was challenging in this case. Then all three ladies in Trittico. It's the first time around for all of them for me. I feel like I need to put my brain on ice. And this was after about 25 performances of Butterfly, so it's been quite an ambitious year for me.

How do you learn so much new music?

It’s the process. You have to not just learn the music, you have to sing the music in and you have to really investigate and invest yourself in it. To get something to performance level, it has to be second nature. That just takes time.

I start with purely practical things. Learn the music, and if it's not my native tongue, make sure I'm clear on all the text. I familiarize myself with the story and anything historical. Then I start singing it in, which takes time. I just live with it. By the rehearsal process, you have to have a lot of the work done already. Then you put the role on its feet and start more exploration.

I always like to arrive at the rehearsals with a clear idea of what I think of my character and my place in the story. I have ideas of how I want each moment to be interpreted and I throw that into the mix. Your brain gets saturated. It's not just learning music well enough to stand there with a music stand or music in your hand. I want to create people and flesh them out, and that involves you on every level – emotionally, spiritually, and physically.

How are you going to change from one character to another between the Trittico operas?

I've never done anything like this before! I know what it's like to do a tour-de-force role, which has its challenges, but then you're telling a story from beginning to middle to end. I said to Patrick Summers, our conductor, that each opera in Trittico has a beginning, middle, and an end, but there's a different level of investment. I'll walk into a room and I'll think, wait, am I a tramp, a nun, or a young girl? There was one day when we did Schicchi in the morning, which is not nearly the task that the first two are for me. But you're still invested in part of that story. I couldn't quite shake it, and I was having a hard time 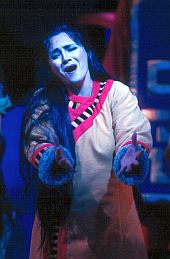 concentrating on Suor Angelica. It's definitely a serious challenge for me.

You've done Mimi, Musetta, Liu, Butterfly, you're doing the three Trittico roles. Does Puccini have a special place in your repertory?

If I could choose my favorite two composer dudes, I’d pick Janáček and Puccini, because they suit me the best. I relate to them the most.

But I don't sing Liu any more, or Mimi. They are great roles, but I've done them so many times, and they're not interesting enough anymore. I was able to serve these roles well in my younger days. Now I feel I want something juicier, I want something with more complexity. I also have done well over 100 performances of Mimi.

I'll do Musetta, though! I have a blast playing her.

Are there other roles you've dropped?

Micaela in Carmen, for the same reasons. I did Rondine, and I'm not really interested in doing it again. I do roles where I feel that I can serve them well in a special way with my particular gifts. We all have our strengths and our limitations, and I'm in a place right now in my life and in my career where I feel it important to make my choices based on what I can serve in that repertoire. But I haven't eliminated that many, considering the wide range of roles I sing.

What new roles do you have coming up, and what roles would you like to do that haven't come along yet?

I'm dying to do Manon Lescaut, and I am going to do Tosca. I would like to do Lady Macbeth of Mtsensk, Emilia Marty [in Janáček's Makropoulos Case], and Marie in Wozzeck.

German repertoire keeps getting suggested and it's something I'm sure that I will explore a little later. I wish companies would put on verismo operas that aren’t well known, such as Mascagni’s Iris. These could be as popular with audiences as Butterfly.

What’s the fantasy role you’d sing if you could sing any part for any voice type? 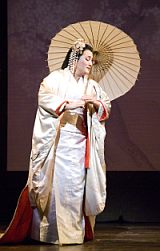 Cavaradossi! That's the best music! Calaf would be next, then Elektra. Oh, and you'll think this is strange: Mrs. Sedley in Peter Grimes. I'd love to do her.

Who would you like to work with but haven't yet?

Butterfly is one of your great roles. How have you developed the character over time?

I'm fortunate to have experienced different productions of Butterfly over time. The majority have been traditional, which have been the least interesting. But the production here with Ron Daniels and the one at the Met with Anthony Minghella were both informative in helping me build the character.

What was it about those productions?

The production here explored her strength as the paradox of the strength and weakness of Butterfly, the aspects where she chooses and is victimized. At the Met, Caroline Cho was so specific about the movements: one finger here, two fingers there. It was such a choreographed, beautiful production, with everybody working from the same palette. When you’re that specific, it informs how you read those lines. In the production here, look at the beginning of Act 2, where Butterfly starts out high, because she's been smoking opium. I don’t like it when Butterfly is just this ding-y chick, with all hope and no doubt, and no suffering. She is suffering, but she is winning that over with her belief and her faith. I think it's much more interesting to show the complexity of emotions that are attached to that faith.

Are there any singers or other colleagues you particularly admire, to listen to or perform with?

I loved performing with Roberto Alagna at the Met! He was so cute and generous and loving to do Butterfly with. I love my tenor in Tabarro, Brandon Jovanavich, a wonderful colleague and singer. Zheng Cao, to do Butterfly with her as Suzuki. A remarkable artist. Stephanie Blythe! I'll be doing Trittico at the Met with her taking the mezzo roles, and I'm looking forward to that.

How about artists from the past?

Are you still traveling with a small poodle named Sappho?

Of course! She's here in San Francisco with me. She's with Beth, out for a walk right now. We don't have other dogs, but we always joke that when we retire we'll have a pack of poodles. We adore Sappho, who is so eccentric, a little insane.

There must be special challenges in being a member of a couple where you both have operatic careers.

Yes. The good thing is that Beth and I both get chunks of time off. If she had a 9 to 5 job, for example, we'd really see each other a whole lot less, which would not be remotely acceptable.

There are singers who travel with their families part of the time, but you can't do that when you're both singers.

No. She has her work and I have mine and that is our reality. The beauty of it is that I took last summer off to learn all this new music, but I also took last summer off so that I could spend some time with Beth, who was in L.A. working on the Ring. We had just sold our house and we were able to be together for almost two and a half months. That almost never happens. There are challenges and there are difficulties. Sometimes, if I have to think another moment about opera, I feel like I want to scream — and Beth will be in Munich and she'll want to talk about her day. It can be inundating.

Does your repertoire overlap in a way that would allow you to sing together?

Not much. We did Onegin together in Santa Fe. We met doing Traviata in 1997. She's begging me to do the Marschallin in Der Rosenkavalier, because she sings Oktavian. I don't know if it's my cup of tea, but I might not be able to escape that, just for the sake of the marriage!

What are you reading?

I just finished Seeking Peace: Chronicles of the Worst Buddhist in the World, by Mary Pipher, and I've just started Tuesdays With Morrie.

What are your favorite things to do in San Francisco, when you have time?

I have no time! But I love to go out to Ocean Beach and I love the restaurants here.