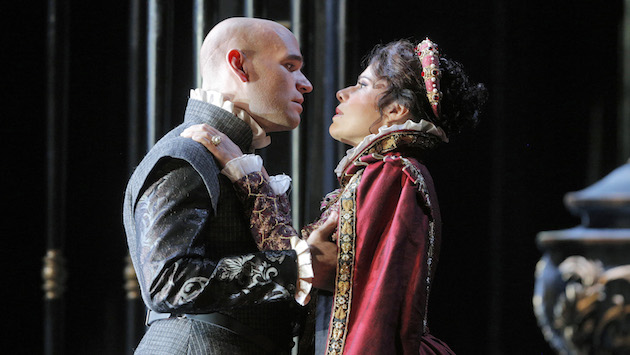 In his final year as General Director of San Francisco Opera, David Gockley chose to present three of opera's greatest challenges, which also happen to be among his favorite works. As the 2015–16 season draws to a close, he has followed triumphant productions of Berlioz's Les Troyens and Wagner's Die Meistersinger with a musically and vocally sumptuous presentation of Giuseppe Verdi's sprawling masterpiece, Don Carlo, given in Italian in the five-act version of 1886.

The production and especially the direction are problematic, but glorious vocalism and mostly superb leadership from Music Director Nicola Luisotti overcame all on June 12 at the War Memorial Opera House in one of the best Verdi productions in memory.

All of the principal singers contributed noteworthy performances, ranging from the very good to the unforgettable. Tenor Michael Fabiano, making his role debut as Don Carlo, produced a seemingly endless stream of beautiful sound, richly colored, expressive, and with tremendous dynamic control. Could his voice have possibly grown substantially in size since last year’s Luisa Miller? It seems impossible, and yet his sound was hall-filling to a greater extent than previously. 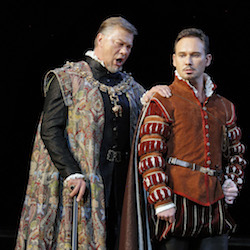 Fabiano moved stiffly throughout the opera, and it was impossible to tell whether his awkwardness was a dramatic choice or not. Certainly his physical interpretation of the part sometimes glanced at the historic Don Carlo’s mental instability, with extreme reactions to the other characters and a kind of cringing sensitivity to intensely emotional moments.

His stiffness was most noticeable in contrast to baritone Mariusz Kwiecień, singing Rodrigo, the Marquis of Posa. These two characters have the most intense and intimate relationship in the opera, and they get a lot of shared stage time. Kwiecień, magnetic and physically graceful, has a mahogany voice that paired beautifully with Fabiano’s bright tenor. Despite occasional oversinging, his Rodrigo was everything one might hope for, a picture of nobility and, in his devotion to the cause of Flemish freedom and to Don Carlo, wholly convincing as the moral center of the opera.

Also making her role debut was Ana María Martínez, who brought to Elisabetta di Valois a most dignified manner, a smoothly smoky soprano, and a Caballe-like ability to float soft high notes. Her sterling breath control and beautiful tone made the great aria “Tu che le vanità” (You have known the vanities of the world) one of the highlights of the performance. Her restrained stage manner was not inappropriate, and yet a wider emotional range is possible even within Elisabetta's near-constant pain at her situation. 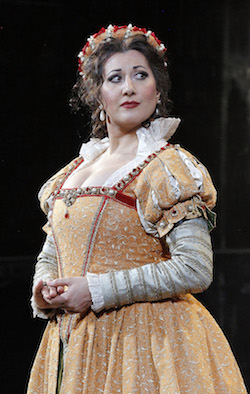 The opera’s counterweight to Elisabetta is Princess Eboli, rival for the love of Don Carlo, and Nadia Krasteva, new to San Francisco Opera, is a real find. She's a beautiful woman whose exciting, wide-ranging mezzo has an exotic, spicy sound that's perfect for Eboli. She nearly stole the show with her two big arias, but, more importantly, she's a wonderful actor who gave Eboli truly tragic stature as she realizes the tremendous harm her multiple betrayals have done Elisabetta. Let this be only the first of many San Francisco appearances for her.

Rounding out the major roles were the great German bass René Pape, absent from San Francisco for much too long, and company regular Andrea Silvestrelli. Pape gave a searing, and magnificently sung portrayal of King Philip, by turns threatening, frightening, and, in “Ella giammai m’amo” (She never loved me) deeply despondent over his loveless marriage and emotional isolation. Silvestrelli was a physically and vocally terrifying Grand Inquisitor, his huge, grainy bass and immense height able to dominate even Pape.

Valentina Simi was heartrending in the tiny, nonsinging role of the Countess of Aremberg, Elisabetta’s attendant. This year’s Adler Fellows made fine contributions to the production. The mezzo Nian Wang appeared in another charming pants role as the page Tebaldo. Pene Pati sang Count Lerma with a sweet and sizable tenor, and bass Matthew Stump was a promising and resonant Monk. Toni Marie Palmertree sang the heavenly voice that welcomes the heretics into heaven at the end of the auto-da-fé scene.

Verdi's musical language is Nicola Luisotti’s native tongue, and after a first act that had little drive and momentum, he delivered a memorably beautiful and shapely performance, drawing spectacular playing from the orchestra. He found exactly the right sound for this grim and darkly tinted opera, and exactly the right tempos. I was especially struck by his naturally flexible tempos within sections, and by his careful pacing of “Dio, che nell'alma infondere” (God, who has infused our souls). It must also be said that in his enthusiasm, Maestro Luisotti sometimes covered the singers, Martínez especially, and he could reasonably turn the volume down with no harm to the orchestral impact.

Special mention must go to the entire brass section, to flutist Julie McKenzie for her work in the first and last acts, and especially to principal cellist David Kadarauch for his magnificent solo in the opening of Act IV.

The performance would have approached perfection had it not been for the anonymous Lotfi Mansouri-era production design, by Zack Brown, and Emilio Sagi’s often-inept direction. Putting its money into hiring great singers was surely the right thing for the company to do, but the next revival of the opera should jettison this production.

The bare, black-mirrored-box set feels like a clichéd relic of another time. The scenic elements added to the set sometimes block free movement of the singers. Act I’s tabletop model of the palace of Fontainebleau is ludicrous, especially when the curtain goes up and you see Don Carlo lounging on the table. There’s little sense of the chill of France or the heat of Spain, and Gary Marder’s handsome lighting design provides a good deal of what there is.

Sagi’s sins are greater than Brown’s. His staging provoked audience laughter at two points that are anything but funny. These are when Carlo reveals his portrait to Elisabetta, and when Eboli removes her veil in the garden scene and learns, with disastrous results for all, that Carlo was expecting Elisabetta.

Fabiano and Martínez, new to their roles, both needed more help than they got from Sagi. There’s hardly any chemistry between them, even in the crucial Act I scenes that establish and then destroy their characters’ love. They appear neither enraptured with their new love nor distraught when it’s taken from them with the announcement that Elisabetta will be married to King Philip instead of to Carlo.

Still and all, the superb contributions of the cast, conductor, and orchestra make this a Don Carlo to remember. Only five performances of this great opera remain, and the beautiful performances will linger in memory long after you forget any flaws in the production. 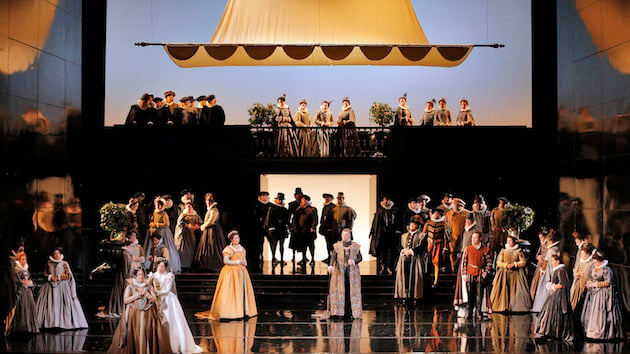