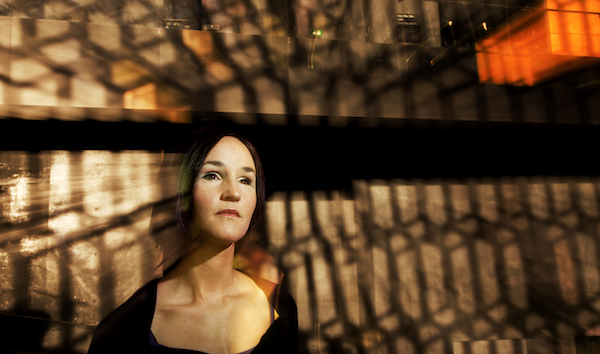 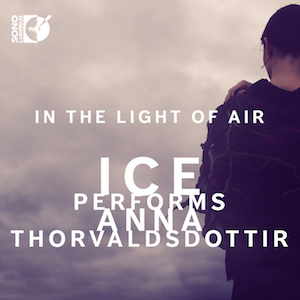 Anna Thorvaldsdottir’s music seems to come from a close communion with nature that also describes the opening of Mahler’s First Symphony or Sibelius’s “organic” symphony forms. But our experience has changed and what was once a basic part of romanticism is now almost a radical act. In a world where 80 percent of Americans can’t see the Milky Way anymore, because of light pollution, music that takes us into a densely-layered, almost motionless Icelandic soundscape feels strange, a shock to the system.

In the Light of Air (2014) implies a spirituality made plain in the titles of its four linked pieces: “Luminance,” “Serenity,” “Existence,” and, most suggestively, “Remembrance.” There is a slow, cumulative process that collects the initially sparse musical materials into a gentle, then more insistent, flow. All of this culminates in “Remembrance,” where, naturally, some of the earlier melodies and gestures are explicitly recalled. But “Remembrance” is also personal and includes a beautiful cello melody taken from a song Thorvaldsdottir’s husband composed to her. And it’s musical, as in the minimally disguised, classic cadential gesture that appears about three minutes from the end.

But Thorvaldsdottir is way too inventive and technically adept a composer to allow her work to become schematic. There’s a solo percussion part using “metallic ornaments” (her words) that playfully wants to burst the seams of the music, but doesn’t. The cadence doesn’t end “Remembrance,” either; it blossoms Bach-like into an unflashy cadenza that puts a last melodic wrinkle in your ear. And the scoring (viola, cello, piano, harp, and percussion) is so fresh and inventive that the deep, dark notes that begin the piece gradually find such contrast that they, too, begin to feel light. The playing, by the International Contemporary Ensemble (it’s acronym never more appropriate), is almost the definition of luminescent. 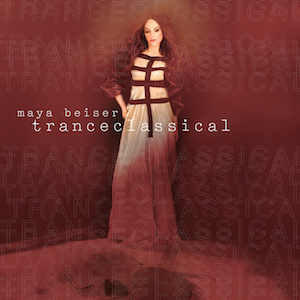 Maya Beiser was a founding member of Bang on a Can and is, a fan of classic 1970s rock, which she explored on her Uncovered album (2014). That album allowed classical critics to note that she possesses rockstar glam and personal magnetism to go with her impressive musicianship.

Her new album, TranceClassical (on preorder, release date July 29) is a must-hear because of her playing and fine compositions by Michael Gordon, Julia Wolfe, Mohammed Fairouz, and Glenn Kotche. But, like Uncovered, it has its letdowns as well.

Even now, when it should be old hat, it seems worth mentioning when a classical artist takes advantage of recording techniques to create meaning, not merely to enhance a performance. Beiser invites the listener to contemplate the medium on the very first track, Bach’s Air (on the G-String) from the second Orchestral Suite. Beiser plays it with an added layer of old-LP cracks and pops, to recreate the way she first heard the piece that catapulted her into a lifetime immersion in Bach’s works.

The nine tracks are a tracery of Beiser’s obsessions, music that has entranced her, and which is trans-classical (please, let’s avoid “crossover.”) There are two works inspired by the Kol Nidre prayer (prelude to the penitential prayers of Yom Kippur), both of which the cellist has been playing in concert for more than a year. Michael Gordon’s All Vows uses an ostinato drone and gradually increasing reverb over a steady, minimalist repetition of intervals from the melody. It grows dense and intense in its seeming call for atonement. Mohammed Fairouz takes a seemingly more straightforward approach in Kol Nidrei, vocal melody and cello obbligato. But the relationship between these two is not quite so simple: The text is in Aramaic, the vocal phrases separated and delicately ornamented. The voice seems to be taking on the penitent’s role, reflecting inwardly on broken vows, while the cello’s wide-ranging, powerful commentary draws us into the ancient melody. Beiser’s cello sings here as thrillingly as anywhere on the album.

Julia Wolfe, another Bang on a Can colleague contributes Emunah (Belief) to the album, a brilliant attenuating of the cello’s rich overtones against Beiser’s lighter voice, here electronically enhanced. Glenn Kotche’s Three Parts Wisdom (the title derived from a teaching of Meister Eckhardt), is endlessly inventive and a joy to listen to, an infusion of bouncy energy against the prevailing earnestness.

Against this music are Beiser’s covers of Lou Reed’s “Heroin” and Imogen Heap’s “Hide and Seek.” It’s obvious why these are on the album, thematically, but Beiser has little to add to Heap’s performance of her own song. Lou Reed’s classic, in a David Lang arrangement, is way too ethereal for me, with no punch to the lyrics as Beiser sings them, and a sameness that Reed’s performances always eschewed, partly with a well-placed push in the tempo. David T. Little’s Hellhound is a dark, pungent take on bluesman Robert Johnson’s “Hellhound on My Trail,” from 1937. Without the added responsibility of vocals, Beiser’s playing is powerful and effective here. She has chosen great partners on this album and more than does them justice. 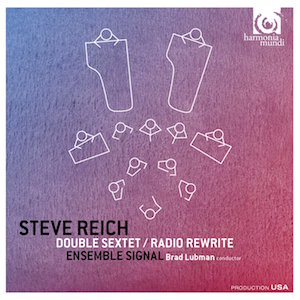 Back in 1976, when Steve Reich left strict minimalism behind with his epochal Music for 18 Musicians, there was only one group that could have performed the piece — partly because the score was only partially notated. If you need testament to how the Reich revolution changed music, Exhibit A is in front of you with Brad Lubman’s Ensemble Signal.

What used to be “downtown music” — a flexible, versatile group of musicians conversant in everything from jazz to early polyphony is now the norm. International Contemporary Ensemble, Alarm Will Sound, eighth blackbird, Bang on a Can All Stars, and many more play Reich with the same verve and familiarity that once belonged to Reich’s ensemble alone. What a great birthday present for the 80-year-old composer – younger colleagues.

If this were another version of Music for 18, there would be no news here. But in its latest Reich release (available July 8), Ensemble Signal takes up a work from 2007 and 2013’s Radio Rewrite. Double Sextet, the earlier work, was originally created with six instrumentalists, each one doubled by playing against recordings of themselves. The present recording uses 12 live instrumentalists, which doesn’t really change the music but gives you the feeling of more immediate reactions occurring between the instrumentalists. You’d really want to hear and see it live to fully appreciate the difference. The main thing about this recording of the piece is the freedom and expressiveness of the wind and violin players above the piano and vibes players. Check out the second movement to hear this right away. Which is not to take away from the solidity of the piano and vibes players laying down the fundamental, interlocking grooves the music is based on. Without them, nothing.

Radio Rewrite, Reich’s remix of a couple of Radiohead snippets into a larger work gets much the same treatment and is every bit as exciting in this performance as Double Sextet. The second movement with its unexpectedly classical suspension dissonances is a high point.

Radiohead itself is a kind of Reichian group and it makes total sense that Jonny Greenwood would play Reich’s Electric Counterpoint onstage. This fertile cross-influence between rock/electronica/pop and contemporary classical is one of the most seminal things to come out of the Reich/ Philip Glass side of the minimalist revolution. And Ensemble Signal’s easygoing, lived-in performance is the epitome of that enduring change.