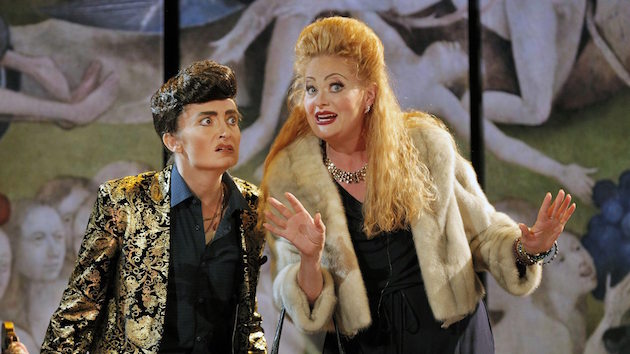 Handel’s first great opera, Agrippina, is a cynical, satirical piece where treachery and cunning lead to political success. At West Edge Opera, Mark Streshinsky’s modern production brings out the comedy in the plot, and three stellar singers make Handel’s intricate, playful arias soar. The story: Empress Agrippina, upon hearing of her husband Claudio’s death, immediately schemes to secure the crown for her son Nero. There are just a few problems: Claudio isn’t actually dead, he has already promised the crown to Ottone, and all three men (Claudio, Nero, and Ottone) are in love with Poppea. Much eavesdropping, plotting, and confusion ensue, but somehow everyone is satisfied in the end.

West Edge Opera’s production in Oakland’s abandoned train station is set against the backdrop of Hieronymus Bosch’s “The Garden of Earthly Delights.” The painting’s surrealism and eroticism emphasize the theme of lust (for both sex and power) and complement the plot’s absurd humor. Sarah Phykitt’s understated sets — a lovingly caressed throne, beds, and chaise lounges in various characters’ rooms, a podium for public announcements — provide plenty for the singers to work with and avoid competing with the busy background or the action. The lighting, by Kevin August Landesman, completes the sense of place. A green wash turns the stage into a forest, Nero and Claudio literally hog the spotlight as they strut down the aisles, and sharp shadows reflect Agrippina’s nightmares of failure.

Agrippina is the heartless, scheming center of the show. As played by Sarah Gartshore with frequent raised eyebrows, forced smiles, and condescending gestures, she is utterly believable. Gartshore is vocally perfect for the part with an edgy, powerful sound in her arias and smooth through lines on the recitatives. In “Pensieri, voi mi tormentate” (Thoughts, you torment me), she demonstrates extraordinary control over vibrato and volume, alternating between a warm, cutting straight tone (with a breathtaking messa di voce) and a rounder, ringing sound. 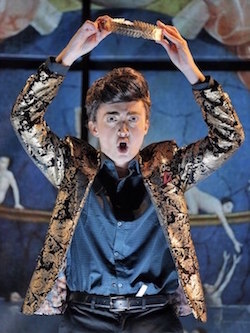 She is well matched by Céline Ricci’s Nero and Ryan Belongie’s Ottone. Ricci is proof that voices need not sound small or straight to excel in Baroque repertoire. She tossed off melismas as if she could have sung ones twice as long, all with full resonance and even vibrato. In a gold blazer and Elvis hair, Ricci swaggered through the show with exaggerated machismo — even masturbating onstage and partially undressing to reveal her bulging boxers. As her handsome rival Ottone, Belongie brought a very different sound. His unusual countertenor has a masculine, chesty quality reminiscent of a haute-contre tenor, with pure tone that is uncontrolled at the top but rich in his tessitura. “Voi che udite il mio lamento” (You who hear my lament) could have been written for Belongie; his rendition had me closing my eyes and hoping the aria would never end.

The rest of the cast is competent, if not at the level of the leading trio. Carl King’s bumbling and womanizing as Claudio was first-class, but his gravelly baritone was inconsistent across his range, losing strength during the role’s lowest bits. As Poppea, Hannah Stephens provided much humor with her acting (particularly in her sleep-talking scene). Her voice often seemed undersupported, though it still impressed with its tireless agility (a necessary quality for such a demanding coloratura role). It would have been nice to hear her sing the more exciting and florid “Pur punir chi m’ha ingannata” (To punish the one who deceived me) instead of “Ingannata una sol volta” (Deceived one time) in the second act. Some of her pieces were marred by coordination issues with the orchestra, a problem also suffered by Nikolas Nackley as Pallante. Narciso would have fared better sung by a contralto, rather than mezzo Johanna Bronk, for whom it sat too low. Both suitors to Agrippina were quite funny. Bronk ran with the idea of Narciso as a foot fetishist, and Nackley deserves special credit for baring it all. 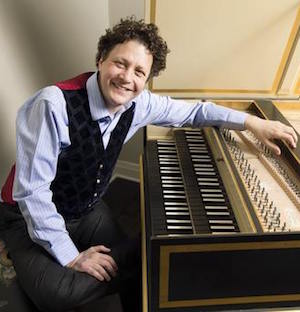 led the orchestra in what was clearly an opening performance of a good ensemble. The violins, oboes, and trumpet all had audible slips, and as noted above, synchronization with some singers was an issue. Still, the size and texture of the orchestra was ideal for the repertoire and space, and Vinikour elicited dramatic dynamic range from both the instrumentalists and the singers. The continuo (Vinikour on harpsichord, Paul Hale on cello, and Richard Savino on theorbo) was especially solid, with sparkling sound and spot-on timing.

The obligatory lieto fine (happy ending) in opera seria can be maddening. For three acts, conflicts build and plots thicken, but then everything is suddenly (and often unbelievably) resolved in the final scene. Director Mark Streshinsky solved this problem by borrowing a classic trick from films “based on a true story.” During the final chorus, as each character congratulated Nero on his ascension to the throne, the supertitle displayed his or her fate. Spoiler for those not remembering their ancient Roman history: everyone dies in amusingly varied ways. 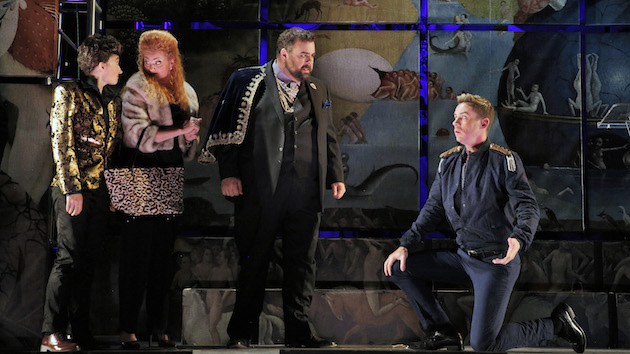