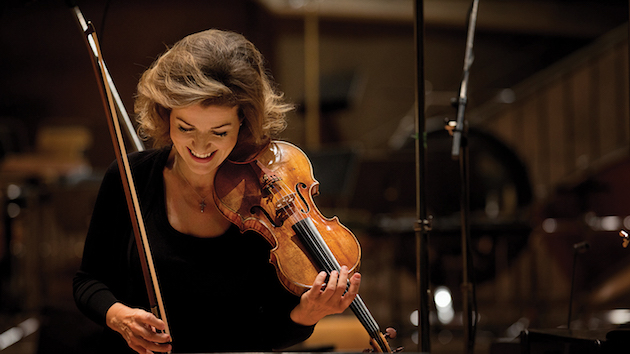 Violinist Anne-Sophie Mutter has been deliberately uncomfortable for 40 years.

“For a musician, if you feel comfortable something is wrong with you. Not all pieces require that you write a doctorate about them, but at the end of the day, it’s not about you. It’s the struggle. To be comfortable would be horrible,” she says in a phone interview from Germany. 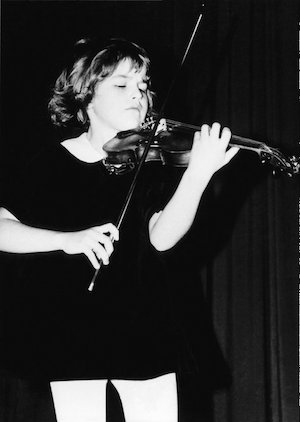 Mutter is well-known for her command of the classical canon and says Beethoven’s string quartets and trios offer possibilities for endless exploration in the role-playing between instruments that she considers advanced, even a precursor of the contemporary music scene. Considering Mozart’s work, with its dance-like qualities and emotional depth leads her to say, “The entire world is in one [stroke of a] bow. How you play one bow is full of humor, everything. Therefore, the musical gesture can never be refined enough. It has to be exuberant, spontaneous, full of character and controversial emotions. The works are fascinating.”

Not content to advance and develop her work by musical challenge alone, Mutter finds stimulation in fine art and scientific philosophies. A painting that captured her attention at a Matisse exhibit was like a snapshot of a room in which the vulnerability of people and their relationships became transparent, she says. The writings of Einstein on imagination and knowledge, which she paraphrases as “fantasy is more important than knowledge,” provide guidance. Einstein said, “Imagination is more important than knowledge. For knowledge is limited, whereas imagination embraces the entire world, stimulating progress, giving birth to evolution.” From this, Mutter says, “We all know what he means by that. We must be true to the music, but the little dots, the notes, are only signals. If you write the music out, there is more there.”

About the San Francisco Performances program, Mutter favors Currier’s Clockwork, his complicated, four-part work for violin and piano, because of its wit, rhythmic challenges, and fun “clock-that-goes-mad” ride. “It was the first piece I heard of Currier’s. He’s one of the great, living American composers.”

The Mozart sonata, she says, is “unavoidable” because of its high value as a groundbreaking door-opener for Beethoven and for the violin. “Without Mozart, the violin wouldn’t have been where it was in the 1800s. This piece is so difficult, wonderful, operatic. Every phrase has a different direction. The violin and piano are interwoven like one voice.”

Respighi’s work is like a trip to a lush, melodic Italy, Mutter suggests. The passacaglia at the end is incredibly difficult to play and a showcase for Orkis. “Lambert and I always have agendas we’ve developed for our programs. It’s celebratory this year. We chose pieces that over our 29 years we’ve enjoyed playing together: the Respighi in particular.” 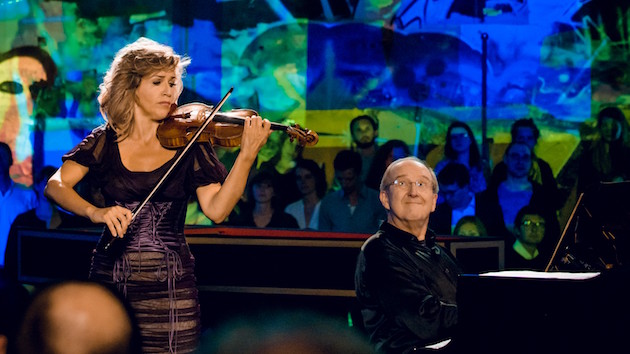 Onstage with Orkis, a shared sensitivity she says existed from the first moment they played together allows them to mind read. “Things happen. He has an incredible way to voice his instrument. He knows how to get out of the way, which permits me to play soft when needed. We can make very private music where refinement is key. He likes to experiment on everything: tempi, everything. Minor adjustments, ebb and flow. Everything seems to be possible, which is a great quality.”

Turning the conversation to the next generation of string players and the Anne-Sophie Mutter Foundation that has since 1997 supported scholarship students from the USA, Europe, and Asia, Mutter’s tone is animated. Today’s students, she says, can play amazingly, but lack connection to expression in music that is beyond technical skill. “Creating a lasting memory that can be planted in the audience,” she insists, makes music meaningful. “A teacher has to infuse questions, not solutions, into a student. If you don’t do that, that is the death of classical music.” 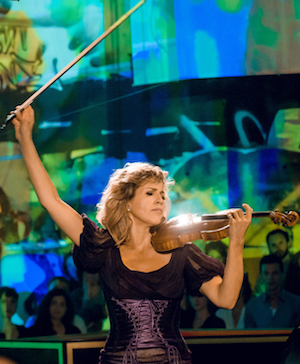 Asked if there are living composers with whom she’d like to work for the first time or more often — Mutter has commissioned or premiered a substantial number of new works — she reacts. “Are you kidding? There are trillions. Thomas Adès, Unsuk Chin ... and new works are coming up by composers with whom I’ve worked before: Currier, [Andrè] Previn. Oh, and John Williams just sent in the mail a beautiful piece. I’m totally smitten with it.” Working with living composers has provided Mutter with insights into the architecture of original scores — and expanded her relationship to familiar, classical pieces. “In an orchestral work by Mozart, how you open your frame so the second violin joins you in a certain way becomes the point, not how you play certain lines. You become less set in stone, less dogmatic, more personal and daring.”

Mutter’s preshow regimen includes physical activity, no sugar or caffeine, and a brief, afternoon nap to refresh her brain. “Musicians over time have survived while drinking wine all day and performing without physical preparations, but that’s not what I’m about,” she says. Although she appreciates that students are better informed about the physical and mental wear-and-tear on a professional musician, she occasionally finds them “trained to be so perfect that I want to tell them to be more personal, take more risks, find your own voice on a piece. Listen to recordings from the ‘50s and ‘60s; hear who had impact on music history because they had phrasing and were taking time that was unique to them.”

In other words, behave like a musician and make yourself uncomfortable.