Maestro Michael Morgan on the occasion of his 60th, the Oakland Symphony’s season-opening concert on Friday, October 20 at the Paramount Theatre was notably focused on the passage of time.

Morgan made that point explicitly in his introductory remarks to a performance of Shostakovich’s Symphony No. 15, the composer’s last. The four-movement work, said Morgan, lays out a “journey” from the closest thing to “innocent joy” Shostakovich every managed to an old man’s resignation in the face of death, complete with the percussive whirr and chatter of a hospital room’s monitors. The middle movements portray adulthood and a dance with death, in the conductor’s view.

A listener didn’t need to completely buy into the programmatic reading of this diverse, emotionally confiding symphony to enter its fascinating realm. (Shostakovich said the work was somehow related to a planned opera based on a Chekhov story, which never happened.) What mattered was the music, not what it “meant” in any readily explicable way. Morgan, who made an eloquent and persuasive case for the composer’s sprawling Symphony No. 8 two seasons back, proved himself once again to be a committed interpreter of the 20th century Russian master.

In doing so he was handsomely served by the ensemble’s standout musicians. Noteworthy contributions came in Daniel Reiter’s haunting, 12-tone cello aria, concertmaster Terrie Baune’s jaunty gambit, and flutist’s Alice Lenaghan’s ingratiating flute solo at the outset of the piece. The entire percussion session performed with precision and wit throughout. The brass chorales in the Adagio took on a burnished solemnity, even with the occasional tarnish from the French horns.

Bristling with quotations (of Wagner, Mahler, Rossini’s William Tell Overture and his own symphonies), Shostakovich’s Opus 141 flirts with pastiche. In some ways the work comes off as a symphony in parts, of ideas tossed out, explored for a while, undercut, interrupted, and discarded for something else. Yet even in that there’s a kind of unity of purpose. One of Shostakovich’s enduring strengths is his ability to switch gears from ardor to irony, tragic seriousness to self-mocking burlesque. That kind of nimble musical gait was an essential asset for the composer when it came to eluding the Soviet censors’ grasp.

Morgan and the Oakland band encompassed this beguiling work’s colorful and emotional range. In a sprightly but tenderly drawn first movement, which included the composer’s self-described depiction of a toyshop at night, a light and wistful tone prevailed. Taking up the Adagio with the patient, even stretched tempos he employed repeatedly, Morgan emphasized the haunting contrast of the hymn-like brass harmonies and that yearning cello solo. It was as if one brave soul were taking on substantial grave forces. 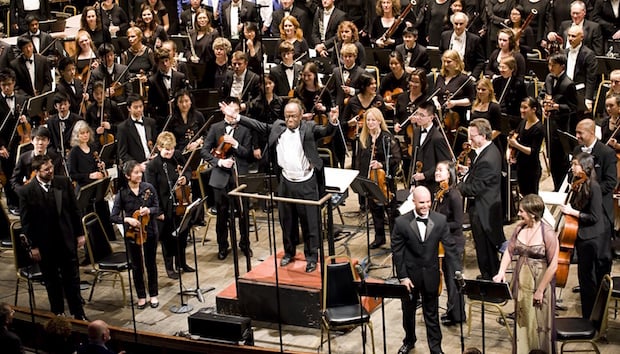 If the performance faltered, it was in the third movement, which lacked some of the pungent bite this episodic passage needs. But there were also some vividly drawn details, notably a series of brass chords that seemed to melt into softly shining puddles of sound. The eventful final movement was a journey in its own right, across a landscape of ominous prospects (signaled by a quotation of Wagner’s Ring-cycle “Fate” motif), fragile stretches of chamber-like intimacy in the strings, references to the composer’s own impassioned Symphony No. 7 (“Leningrad”) and a murmurous closing set off by an infectiously lulling percussion riff.

The program, which bore the burdensome, marketing department title “Icons/Iconoclasts,” opened with Beethoven’s Symphony No. 5. Here, too, Morgan seemed to be thinking about time, with tempos that were by turns refreshing and perilous. The opening Allegro, launched by the most famous four notes in Western music, had a vigorous, almost youthful character that avoided the trap of easily received emotion. The horns brayed out with adolescent enthusiasm. The bassoons chortled and jested. Even the occasional overeager entrance seemed to underscore the forward-driving verve.

Morgan risked chaos in a slow movement that moved from leisurely contemplation to languorous torpor. The players seemed to lose their way and each other at several points. Morgan’s deliberate and deeply considered approach played out impressively in the closing movements, even as the tempos slowed daringly near the end. The result, in a thrilling rush to the climax, was high-contrast drama of the first order.

It’s no small feat to make this most familiar work grip the listener anew. Morgan, as if to assert that turning 60 was a new beginning, made it happen.