Eyebrows rise at the thought of Renée Fleming, a soprano who has built her reputation on the creamy beauty she brings to lyric soprano roles created by Mozart, Strauss, and others, singing the wrenching verismo repertoire of Puccini, Mascagni, Catalani, Cilea, and others. Verismo is about blood and guts, sweat and suffering, and enough 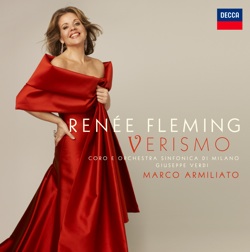 over-the-top singing to sear the makeup off Fleming’s ubiquitous glamour shots. It’s about vocalism with an edge, vocalism that takes risks. You can’t utter a convincing death shriek while simultaneously ensuring that your tonal center always remains intact.

Nonetheless, it’s hard for an artist to resist the urge to branch out. Thus, following on the heels of her 2006 mixed-bag recording, Homage — The Age of the Diva, on which she sang heavier repertoire by Verdi, Puccini, Cilea, Janácek, and Korngold, Fleming has ventured into the prime spinto territory often associated with Olivero, Callas, Tebaldi, Scotto, Muzio, and, in the latter part of her career, Freni. The results are far more satisfying than you might have expected.


Dismiss any thoughts that Fleming has gone slumming in verismo land because she’s going for broke as her voice has declined with age. Recorded in 2008, in her 49th year, this CD reveals her voice to be as gorgeous as ever. If anything, a certain hardness that formerly crept into her upper middle range has been replaced with an even creamier, generous tone, while the lower range has grown lusher. It’s hard not to fall in love with her sound.

She also knows what she’s doing. In her program note, she freely acknowledges that she has listened to how her predecessors have interpreted this repertoire. She knows how to sing with conviction, and summons forth the sobs, accents, and dynamic swings that this music calls for. She may lack tears in the voice and a classic spinto edge, but she sure knows how to play on her strengths.

To my ears, a major handicap is conductor Marco Armiliato’s refusal to indulge in the radical portamentos of classic verismo. Fleming alludes to this when she writes, “Armiliato kept the tempos flowing, and I attempted to bring a stylistic purity and clarity of text to the music, while retaining as much emotional expression as possible.” Translation: She did what she could. Yet nothing can alter the fact that a Wally who moans “ohimè, ohimè, ohimè” in strict time does not lift the music off the printed page. Ditto for the two scenes from La rondine when not conducted with greater waltzing lilt. Where is Nicola Luisotti when we really need him?

Neither Renée Fleming nor Claudia Muzio sounded young when they recorded “Si, mi chiamano Mimi.” Still, listen to the difference in impact when a soprano born to sing Puccini is given enough space to make her point. As for Magda Olivero, whom Fleming spoke with before beginning this project, she remains sui generis and definitive. Ultimately, this is a CD that you’ll want to hear, then use as a springboard to further explore verismo repertoire.