On the surface, Friday’s program for a concert at Palo Alto’s First Lutheran Church looked peculiar. The concert consisted of four works, all with the same instrumentation — two violins, one viola, two cellos — all written by the same late-18th- and early-19th-century composer; one who is not perceived as being among the hot shots of classical chamber music. Yet this situation shows you the dangers of holding such superficial attitudes. It isn’t every day when a listener gets to hear such revelatory, beautiful, but comparatively unknown music from a composer who is thought of as a minor figure. Well, 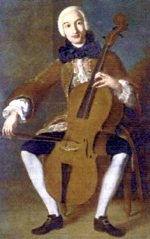 from me, no more! The New Esterházy String Quartet, with an added artist, opened my eyes to the experience of Luigi Boccherini’s cello quintets, and I can’t wait to hear more of them.

The quartet — Kati Kyme and Lisa Weiss on violins; Anthony Martin, viola; and William Skeen, cello — brought in Elizabeth Le Guin, as the additional cellist. They played on original instruments with Baroque bows positioned some distance away from the frog, with gut strings, no chin rests, and no pegs. Together they made as fine and substantive a professional group of string players as audiences are likely to hear anywhere. The evening’s repertoire consisted of four cello quintets culled from the 143 such works that Boccherini wrote in his lifetime (out of no fewer than 589 completed compositions).

The first thought that came to mind as I listened was how different the works were from one another. Unlike Vivaldi, for example, who is occasionally accused of writing only one concerto 500 times, the four Boccherini quintets I heard stood entirely independent of each other. Even more remarkable is the fact that they were subtly, though distinctly, different from the chamber music produced in what was then the center of gravity for chamber music: Vienna. For example, the thematic material had its own stamp; the harmonic motion was idiosyncratic; and instrumental presentations were singular (such as cello parts written in the range of the violins, on occasion). Nowhere in their chamber music did Haydn, Mozart, Beethoven, or Schubert handle things in this fashion.

I hypothesize that Boccherini (1743-1805), an Italian who spent most of his musical and compositional life in Spain, separated from the Viennese milieu, evolved differently than his contemporaries, for the same reason that the animals in the Galapagos differed from each other, island by island.

Not varying from the excellence on display was the added artist, Elisabeth Le Guin, who not only is a superb Baroque cellist, but is also a musicologist and teacher (at UCLA) and a winner of the Alfred Einstein award for her 2002 article on Boccherini published in the prestigious Journal of the American Musicological Society. Her most recent book, Boccherini’s Body: An Essay in Carnal Musicology, boasts a delicious title, and I’ll get to it soon. She also maintains a Web site with period criticism of the composer and downloadable recordings of his music.

Discombobulated, in a Good Way 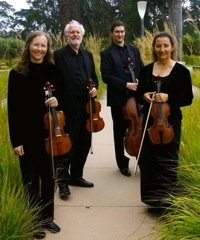 Of the four works performed in Palo Alto, the most remarkable was the Quintet in F Minor, G. 348 (the G in the nomenclature honors French musicologist Yves Gérard, who cataloged Boccherini’s works). The minuet of this piece was so intricate that I lost the rhythmic pulse, and had to hunt to find the downbeat for some dozen measures before I was able to restore my equilibrium. That’s akin to losing one’s footing in a Sousa march! In my notes on the performance, all I was able to command for the third movement’s stunning content was a single word, “Breathtaking!” The concert’s final work, the Quintet in F Major, G. 347, was a whirlwind, with the third movement containing an effect that may have been a deliberate imitation of flatulence (if true, the man had a sense of humor).

During the brief intermission, I examined the performance parts used by the players and was surprised to see that they were executing from an early French edition of Boccherini’s music, printed in the first quarter of the 19th century. But with work under way for a new, complete edition of Boccherini’s music, the difficulties of dealing with the peculiarities of early editions will someday be ameliorated.

It should be no surprise that from time to time Boccherini’s music shows up in movies. It was the music played in The Ladykillers (1955), starring Alec Guinness, Herbert Lom, and Peter Sellers. The thieves, planning a robbery, hid their activities behind a recording of the Minuet from Boccherini’s String Quintet in E Major, G. 275, all the while pretending to be a group of string players practicing for a concert.

More recently, the movie Master and Commander (2003) had actor Russell Crowe playing a violin in excerpts from Boccherini’s String Quintet in C Major, G. 324, amid his duties captaining a British warship. I remember being charmed by the few passages Crowe played when not beating up on the French, and wondered who might have written such engaging music. Well, at least someone was paying attention to Boccherini — for I was not. My loss: It won’t happen again.