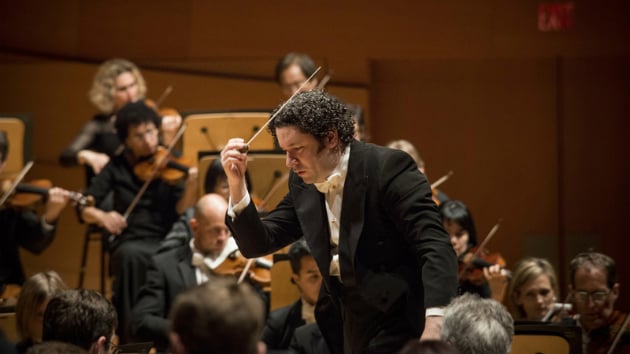 As the Los Angeles Philharmonic’s epic centennial season entered the home stretch in mid-May, the plan was to ease off the steady diet of new or unusual music and get back to the basics. No more world premieres — just cycles of Haydn symphonies and Beethoven piano concertos, crowned by a couple of masses by both. A big-name pianist, Lang Lang, would handle all five Beethoven concertos, and the Phil’s big-name conductor, Gustavo Dudamel, would survey Haydn’s last four symphonies, the masses, and two Beethoven overtures.

It didn’t quite work out that way. Lang, who had been recovering from tendinitis, limited himself to just the Concerto No. 2, with the others delegated in pairs to four lesser-known young pianists. The Haydn cycle of four was reduced to one, No. 104, played only at the concerts that featured Lang. Beethoven’s Coriolan Overture was deleted, leaving only his Egmont Overture as a sometime curtain-raiser.

The only program that emerged relatively unscathed at Walt Disney Concert Hall was the choral finale on Sunday afternoon, May 26 — a pairing of Haydn’s “Lord Nelson” Mass and Beethoven’s Mass in C, the latter being new to the LA Phil. I use the word “relatively” because there were a couple of changes there, too; the placement of the two masses before and after intermission was reversed, and soprano Liv Redpath replaced Ailyn Pérez, who cancelled due to illness, in both pieces.

Written less than 10 years apart, both commissioned by Nikolaus II, Prince Esterházy, with similar structures and lengths, the “Nelson” Mass and Mass in C do make a compatible coupling. The differences lay in their orchestrations — Beethoven adds winds and two horns to his orchestra — and their overall moods.

Although Haydn’s mass begins with a deceptively solemn Kyrie in ominous D minor, this soon gives way to a joyous D major most of the rest of the way — and that colors one’s impression of the piece as a whole. With Beethoven, there is joy, too, but it is tempered by added weight and richness in the sound. Despite sporadic premonitions of choral triumphs to come in the Missa solemnis and Ninth Symphony, the level of inspiration seems to flag in stretches of the Sanctus and Benedictus, whereas Haydn’s muse runs full-tilt throughout.

Conducting without a baton, Dudamel emphasized the joy with sharp rhythmic gestures and animated tempos, receiving a smooth, expert response from the Phil and the Los Angeles Master Chorale. In both works, the soprano gets the first solo word within a few bars of the opening — and Redpath was ready on short notice, her voice sounding pure, lovely, and agile, with all manner of florid lines. Mezzo-soprano Anna Larsson exhibited a rich, mellifluous timbre in both works; tenor David Portillo — fresh off the Met’s production of Poulenc’s Dialogues des Carmélites — sounded reedy at first but soon gathered strength. Outstanding among the voices was the great opera/lieder baritone Matthias Goerne, who filled the hall with a sonorous, steady, golden-brown tone. Indeed, no one in the quartet had any problem being heard above the LA Phil despite being stationed behind the orchestra and in front of the Master Chorale.

In the “Dona nobis pacem” conclusions, while Haydn makes his plea for peace with all flags waving, Beethoven returns to the relaxed tempo of the opening Kyrie in contemplation perhaps of what a real peace would be like. For the sake of concluding a concert on an exultant, crowd-pleasing note, it would seem that the Haydn mass would be the ticket. But in reversing the order of the program, Dudamel made his listeners deal with Beethoven’s less-glamorous introspection last — which was brave of him.