Karlheinz Stockhausen (1928 – 2007) was once a towering figure in the classical avant-garde, his influence even reaching outside the field to musicians like Miles Davis (On the Corner, “Rated X”) and the Beatles (“Tomorrow Never Knows,” Sgt. Pepper’s Lonely Hearts Club Band, “Revolution 9”). Yet he probably outlived his influence, his megalomania ironically painting himself into a narrow corner of contemporary music late in life, not helped by his naively inflammatory comments on the 9/11 disaster. More practically, his music was and is difficult to perform. All of that hasn’t stopped Voices of Silicon Valley from taking on one of Stockhausen’s groundbreakers, Stimmung (1968) on a digital-only album titled Voices of Our Time (Orpheus).

Written for six amplified vocalists, Stimmung is said to have been the first Western composition to use vocal harmonics or overtones from a single note (in this case a B-flat) to create a “melody.” This process takes place 51 times over the course of the piece, with the order decided by the performers. Each of the 51 melodies or “models” is repeated several times until everyone is on the same harmonic page with the lead singer, after which they move on to the next model. This process seems like a variation of that of Terry Riley’s In C, written four years earlier.

The piece exists in at least three versions — Paris 1968, Singcircle 1977, and Copenhagen 2003 — yet is rarely recorded; the most accessible one is by Paul Hillier (who created the Copenhagen edition) and the Theatre of Voices (harmonia mundi). Intentionally or not, Voices of Silicon Valley has adopted Stravinsky’s half-jesting suggestion that the piece’s time-scale “indicates the need of a musical equivalent to the parking meter” by performing an “abridged” version of the Paris edition that trims the length from a little over an hour to about 45 minutes.

The six VOSV vocalists seem to expand and curl their vowels around the B-flat pitch; the nearest equivalent I can think of is a slow wah-wah pedal effect in popular music. A “tuning tape” drones from the beginning of the performance until just before the end — it sounds like ordinary ground hum to me — occasionally increasing and decreasing in volume. As heard here from a stream, the “models” are not separated by track numbers so we don’t know where the performers are as the piece progresses. 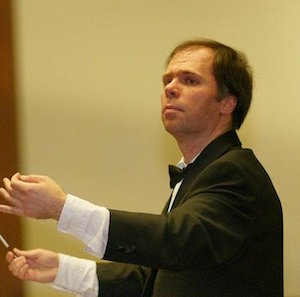 The long prelude to Stimmung on the album is a clutch of varied pieces by VOSV leader Cyril Deaconoff, two of which he says bear the influence of Stockhausen. One of them — the most interesting of the lot — is Our Time, which after a crash opening of electronic broken glass has choral voices operating under the influence of Stimmung before shifting to more conventionally melodic territory. The title Kontakion for Pascha (Easter) might refer to Stockhausen’s electronic masterwork Kontakte, but the piece itself is an austere, ethereal meditation for chorus and pipe organ interrupted by a hand drum banging out a Latin beat that transforms the singing. The other Deaconoff selections are two movements from his String Quartet No. 1 (played by the San Francisco Conservatory String Quartet), and “No Ladder Needs the Bird,” a syncopated, colorfully-orchestrated choral excerpt from his cantata Canticles of Love Despair and Hope, where the prevailing influence seems to be Leonard Bernstein.

While Stimmung isn’t minimalism, it is best approached as if it was, without expectations of Western development or direction as to where the music is headed. Yet even hearing it this way in a relaxed state, and while acknowledging Stimmung’s place in history, I have to conclude that this is not one of Stockhausen’s more absorbing pieces, either in this version nor in the Hillier recording where the “wah-wah” effect is gentler, not as wide-ranged, the voices more polished. I much prefer Stockhausen’s wildly imaginative electronic and spatial pieces to this.