Even without any background, when you first encounter the quiet, eerie, achingly stretched opening chords of Béla Bartók’s first string quartet, you just know that you are in the presence of something magnificent. The only improvement on that experience is to listen to the music again and again. 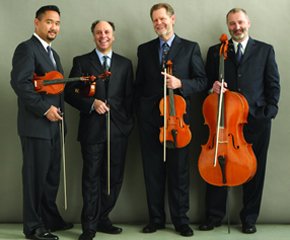 That a group of the Alexander String Quartet’s prominence would present the complete cycles of Bartók’s six and Zoltán Kodály’s two string quartets is newsworthy enough, but there is more to the story.

The ASQ’s unusually and inconveniently timed (10 a.m.!) and yet very popular Saturday morning concerts in Herbst Theatre are introduced, explained, garnished, and leavened by musicologist Robert Greenberg’s inimitable lectures and, as usual, he has an ace up his sleeve for several upcoming performances.

It’s a historic programming coup. The first of four programs, on Jan. 15, will pair Bartók’s and Kodály’s String Quartets No. 1. The second, on Feb. 19, will match the two composers’ String Quartets No. 2. (Program 3, March 12, and Program 4, May 14, offer the other four Bartók quartets.)

Greenberg explains that the two Hungarians, roughly of the same age — born a year apart, but Kodály (1882–1967) outliving Bartók (1881–1945) by two decades — were lifelong friends, and it was they, a century ago, who came up with the joint premieres of their quartets. They gave the world premieres of their first quartets in 1909 in Budapest, and the second quartets in 1918. And now, in 2011, we have a re-creation of those two landmark concerts.

The Alexander already presented the six Bartók quartets a decade ago. Speaking with Greenberg about that, I thought it striking how the lecturer expresses dissatisfaction with his work back then. (As an audience member in 2000, I strongly disagree — he was excellent.)

Yet Greenberg’s view is that he didn’t do enough to explain and demonstrate fully the extraordinary musical content of Bartók’s quartets. The musicologist is deeply impressed by “the degree to which Bartók’s music represents a synthesis of his Western European training, Hungarian nationalism, and contact with the indigenous music of eastern Europe, Turkey, and North Africa.” Eleven years later, Greenberg says, this picture will be presented more fully.

“Their contact with folk music profoundly altered both Bartók’s and Kodály’s compositional languages,” Greenberg says, “and their modernism is the result of a synthesis of unlike parts. The combination of classical musical form, extraordinary compositional technique, and spiritual and melodic essence makes Bartók my favorite 20th-century composer.”

Greenberg, a composer himself, says much composition today is “all about synthesis, putting things together, and Bartók did a hundred years ago what we many composers today are trying to do.”

The modernism of other 20th-century composers, he says, is “purposeful,” but in Bartók’s case, the natural, unaffected synthesis of genres takes music to another plane. And then, when Greenberg starts talking about the integrity and “menschlike nature” of the two men, who endured Nazi and Communist regimes without compromise, a long flight of thoughts begins.

We have been awaiting this opportunity for some time. We love the Bartók Quartets and have greatly enjoyed the Kodály Quartets. Often people see Bartók on the program and grimace, but when they listen to a good, live performance they invariably wonder why they ever ‘feared’ Bartók’s music in the first place.

His passion and craft are as focused and brilliant as Beethoven’s, and his harmonic language is absolutely invigorating to anyone willing to get inside his world of sound.

Bob Greenberg has a great gift for getting people excited about exploring any genre of music. If you know a great deal about music, he ties lots of pertinent facts and ideas together; if you don’t know much, you leave his talks knowing a substantial amount about the music he has discussed and with a desire to know more and more.

Bob’s talks are like gifts that keep on giving. He opens the world of each composer he speaks about and gives the listeners a sense that they have actually met or now know the composer. The two magical Hungarians, Bartók and Kodály, are ready to heat up Herbst Theatre starting this week, and Bob Greenberg and the ASQ are fired up to add more fans to this fabulous and imaginative music.