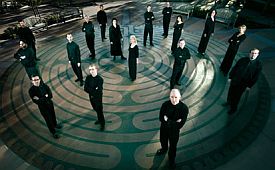 If any Renaissance composer can be said to have the “wow” factor, it would be Carlo Gesualdo. Nobleman, criminal, and all-around troubled soul, Gesualdo pushed music’s limits to the extreme, unmatched in his own time and for centuries afterward in his chromatic harmonies and expressive contrasts. His brilliant Tenebrae Responsories for Good Friday and Holy Saturday, composed toward the end of his tortured life, offers an outstanding introduction to the upcoming Berkeley Festival and Exhibition, to be performed by the sterling Artists’ Vocal Ensemble (AVE) June 10 at St. Mark’s Episcopal Church in Berkeley.

For all its innovation, Gesualdo’s music attracted little notice during his lifetime, and it took the greater part of the 20th century to shape the composer’s reputation from curious oddity to pathbreaking stylist. His greatest notoriety came from murdering his first wife and her lover, after catching them in flagrante delicto. The resulting anguish from this tragedy, and subsequent bouts of depression and paranoia, motivated the bleak atmosphere and gloomy texts that pervade his music.

The Tenebrae responsories are madrigali spirituali — stylistically akin to the secular madrigal, though with sacred texts. As such they have a palpable, personal intensity quite distinct from the more abstract veneer of much Renaissance sacred music. Jonathan Dimmock, AVE’s artistic director, observes that, “given the extreme use of chromaticism, harmonic disturbances, and rhythmic clashes, we can see the composition of this music to have served as a version of music therapy. ... Gesualdo must have internalized the betrayal of Christ by his disciples, as well as the intensity of Christ’s suffering, and the awareness that Christ was unrecognized in his own time and by his own followers. Haunted by his own sin and forthcoming death, a musical meditation on Christ’s suffering and the aftermath of his death seems a fitting way to end his days.”

Crafting an expert Gesualdo performance is no mean feat. In addition to the technical demands of mastering this difficult music, the conductor and singers need to internalize its emotional content and convey it effectively to the audience. “I always try to put myself in the shoes of the audience. I think a concert should be educational, uplifting, fun, stimulating, and contemplative,” Dimmock says. “Above all, it is the responsibility of the choir and me to communicate. Music without passion is merely an exercise; and very little music of the Renaissance can match the passion of Gesualdo. So we have a tall task — not the least because this music is well-known by many people. We’re aware that the expectations will be extremely high.”

Dimmock also finds great value for modern listeners in entering the sound world of this unique composer, even if the original liturgical context can’t be recaptured. “We can find in this music a solace that can only come from extreme honesty and the desire for release from intense pain,” he says. “This music doesn’t represent a single cathartic moment in the composer’s life, nor in ours as listeners, but rather the fruit resulting from months, or even years, of spiritual introspection and self-scrutiny. This is music for contemplatives. As listeners today, you, too, are being issued an invitation to find beauty even in areas of pain and suffering.”