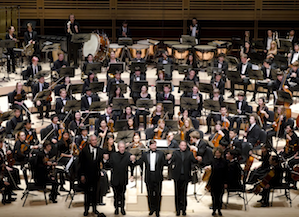 Time once again for the Bay Area Youth Orchestra Festival. This weekend at Davies Hall: six orchestras. 525 musicians. Challenging programs. Teenage talent brimming over. And all in the service of community organizations focused on underserved and homeless youth.

Organizations benefitting from the concert include Covenant House California; InnVision Shelter Network; Music in the Schools Foundation; Samaritan House; Students Rising Above; and BAYC. The four previous festivals have raised more than $77,000.

The program includes works by Rossini, Beethoven, Tchaikovsky, Wagner, Copland, Falla, and Jennifer Higdon, the Pulitzer Prize-winner who wrote that dolorous, but finally uplifting, one-movement tone poem, Blue Cathedral. (It premiered in 2000 and was written in memory of Higdon’s younger brother, Andrew Blue Higdon, who died of skin cancer in June, 1999.)

We spoke to Ramadanoff earlier in the week and asked about his choice of Blue Cathedral.

He said he chose it in part because of the many solo opportunities the piece offers — for flute, clarinet, violin, English horn and bassoon, principal viola, and principal cello. “Everybody gets challenged, including the entire brass and percussion sections.” Ramadanoff added that he’s always been attracted to the arc of the piece: from sadness to spirituality, to expressiveness to excitement, and finally to a peaceful resolution.

“In terms of the way she paints this picture, there’s the use of percussion, and that beautiful duet that happens between flute and clarinet, and then the clarinet is allowed to float out and upward at the end, and to continue its own journey. And then there are the sounds she chooses in addition to the percussion and very soft solo string chords of the Chinese bells and the two-tuned chords played by tuned water glasses, which are first played by the horns then by the low brass … the sounds are beautiful and uplifting, at the end. There’s a sense of coming to peace at the end. Yes, there’s sadness particularly at the beginning, which you hear particularly in the quartet of two violas and two cellos. But from there the piece just grows into an almost exalted excitement in the middle and then a peaceful resolution at the end.”

We asked Ramadanoff about the character of this year’s YPSO. He replied that overall they were younger and still in formation.

“But certainly no less talented than previous orchestras that I’ve had. There are a few players in my woodwind, trumpet, and string sections that are a little bit younger than before. The young clarinetist is newer to the orchestra and is still finding his way. The principal cello is brand new. The violist doing a solo is brand new. On the other hand, my low brass are all veterans, all seniors this year. So it’s a mixture of younger, less experienced musicians with older and quite experienced ones.”In sum, said Ramadanoff, “the orchestra is just getting to the point of finding its center, and it’s just taking a little bit longer.”

The most exciting part for me is witnessing all the polyphonic overlapping between the solo instruments and the rest of the orchestra. I feel the emotional story behind Higdon's composition come to a full realization. — Vanessa Li, violinist

He added, “there’s a wonderful energy in the group, a great deal of enthusiasm. Clearly, they love the music we’re playing and have been very responsive to it. In that sense, they’re no different than orchestras in previous years; it’s just that the enthusiasm has a little more youthfulness to it.”

Among the more veteran musicians is Vanessa Li, 18; this is her fifth festival. She’s a senior at Piedmont High School and is considering a career in business, perhaps in music administration. We asked her reaction to playing Blue Cathedral.

“The most exciting part for me is witnessing all the polyphonic overlapping between the solo instruments and the rest of the orchestra. Especially towards the beginning of the piece, as increasingly more voices are added into the mix and the pianissimo dynamic gradually grows into a fortissimo, and subsequent catharsis. I feel the emotional story behind Higdon's composition come to a full realization….”

Ramadanoff took a doctorate from Julliard and also taught there, and has had a distinguished career with positions at some of the country’s greatest orchestras, not least the San Francisco Symphony, where he served as an associate conductor. We asked his sense of whether the musician’s life had changed much over the years, in light of how many orchestras were in decline or had collapsed altogether, and the tremendous pressure to perform at a very high standard.

“I don’t think it has changed,” he replied after a long sigh. “You mention Julliard: I think back to the time I was there, attending such wonderful parties in New York, where I would see colleagues of mine gathering together and just going through one string quartet after another, exchanging chairs with each other. And I saw that develop into the Emerson String Quartet, the American String Quartet and the New York String Quartet. Those players were all at Julliard when I was there, and what I saw was a passionate love of music, almost a celebration of their technical mastery and the desire to use that mastery to explore possibilities. I think a successful musician really has to believe in the profession. That hasn’t changed.

“What has changed is that the young musicians who come into the profession now have to realize that the range of knowledge they have to master demands more, is much greater because we’re under such pressure to produce vibrant performances in shorter periods of time and because of that your knowledge of a composer or a particular work needs to be deeper. I find more and more young musicians, orchestra musicians, are interested not just in their part but in the score; they want to know what’s going on with that composer. They really want to save time by knowing ‘how does my first trombone part fit not only with what the first trombone part is but the part I’m doing with the bass? How does it all relate?’

I think a successful musician really has to believe in the profession. That hasn’t changed. — David Ramadanoff, conductor YPSO

“I think the same thing is coming true of young conductors. There was a lot of emphasis when I was entering the profession on the basic skills of score reading. What’s the basic knowledge of harmony? And what about stick technique? I think more and more they’re realizing these are just tools of the trade and there’s just so much more you need to know. For example, conductors need to be communicators, not only to the orchestra but to communities. These days, you often have to go into the community not only to build an audience but also to build healthy communities, because the arts provide a spiritual boost, because they are the alternative to sports and work. They’re a key to opening people’s minds and souls.”