Who was Emily Dickinson? Popular portrayals cast the famed 19th-century poet as an eccentric recluse, a shadowy Woman in White. But “that image seems to be a fabrication, and when you go further into the story or into her work, an entirely different character emerges,” says Kathryn Roszak, producer/director/choreographer for Danse Lumière, which stages “Pensive Spring: A Portrait of Emily Dickinson” Oct. 10 in San Rafael and Oct. 19 as part of Berkeley Chamber Performances. 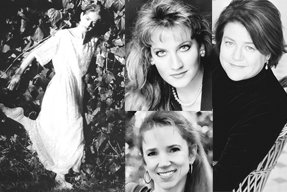 Roszak’s perspective is inspired by research studies beginning in the 1970s that have increasingly interrogated traditional stereotypes. “Dickinson’s poetry is incredibly modern, even today, and remains ahead of its time. It’s also very psychological, and we wouldn’t have had other poets like Sylvia Plath without Emily Dickinson,” Roszak observes. “She’s also very radical in her vision of her world, both of and ahead of her time. That’s what’s interesting to me: She can both be Victorian and step completely out of it at the same time.”

“Pensive Spring” uses a dancer, a singer, and an actress to portray Dickinson in various forms. They are accompanied by Gordon Getty’s The White Election, a song cycle of 32 Dickinson poems. “I heard this music years ago and was struck by its different levels,” Roszak says. “Emily supposedly played the piano, and hearing these unusual melodies, this music struck me as being inspired by that idea — what Dickinson possibly would have played. Getty’s music also partners the poetry very well; it’s not too ornate, and unlike Copland where the piano is more like an orchestra, Getty allows us to hear the text more clearly, which is better for theater.”

While a revisionist Dickinson biography factors into Danse Lumière’s production, the larger goal is to understand the poet through her actual writings. “There has been a lot of work recently about Dickinson’s family and relationships, and certainly that’s of interest, but she is an enigmatic character and quite mysterious. And having more background only serves to make things more enigmatic in the end,” Roszak says. “What we’re doing is to interpret the poetry, to know her through her work as it stands. For the performers, this [biographical] information is something we include in our interpretation, but we’ve taken Emily’s own words in poetry/letters and let them speak for themselves.”

Dickinson’s complexities seem custom-tailored for Danse Lumière’s distinctive interdisciplinary brand of performance art, which embraces interpretations of everything from literature to astronomy. The science metaphor is apt, as Roszak sees Dickinson as “a scientist of the soul. The depth of this poetry allows for different windows of expression to take place. Poetry lends itself to dance and music — a different way to see and hear the poetry. Dance is very visual, as well as emotional, and it gives further illumination.”

Even the company’s rehearsal process mimics Dickinson’s own life. “Each artist has their own unique expression, and everyone has to become Emily in a different way,” Roszak notes. “Also, each artist worked on their material by themselves — very solitary, like Emily herself — and were then brought together in staging rehearsals. Working separately, then together: This is almost like how Emily tried to bring her poetry into her world. She wasn’t just somebody in her room writing; she made her world smaller and more contained to make it deeper, simplifying her life to devote herself to her art.”