Fresh Genius on the Make

Have you heard? Barneys is opening up an additional store in the Mission District for more cutting-edge customers.

OK, I’m kidding. But the imprint of the Los Angeles Philharmonic on the exciting Berkeley Symphony Orchestra concert coming up Dec. 3 is a lot like finding a stash of Balenciaga in an independent boutique. The program is a minireproduction of the Philharmonic’s 2007/2008 season, unofficially known as the “Season of Steven Stucky,” featuring his Radical Light, juxtaposed (as Stucky intended) with Jean Sibelius’ Seventh Symphony and “Elegy” from August 4, 1964, followed by Igor Stravinsky’s Firebird Suite. 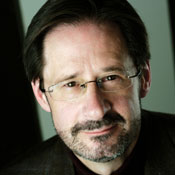 Incidentally, Stucky is currently the L.A. Phil’s consulting composer for new music and was the matchmaker responsible for pairing the BSO’s music director, Joana Carneiro, and Gabriela Lena Frank, the new creative advisor.

Since the classical music world is so small, these interconnections are nothing out of the ordinary. Given the timing and this particular cast of characters, though, this concert continues the steady chant begun in Los Angeles this season: “Classical music is chic again.” It’s young and dynamic, drawn forth with passion that’s romantic in its strength and edgy in its similarity to ecstasy-induced highs. Carneiro and her SoCal counterpart, Gustavo Dudamel, are both charismatic, energizing visionaries — the subjects as well as the instigators of conversations at trendy gatherings. You can practically hear Ellen DeGeneres singing into her Kanye West Auto-Tune, “Change you ca-an believe in.”

Looking at Stucky’s accounts of his inspiration and intentions for Radical Light and “Elegy,” however, I find it hard to understand why classical music hasn’t always had this status in contemporary culture. Indeed, Stucky employs a breadth of modern references that rivals Marc Jacobs in his most successful fashion collections. Let’s go through them: Chinese philosopher Lao-Tse and the inadequacy of words; poetry and the ability of art to do more than hold up a mirror; and, for “Elegy,” the Gulf of Tonkin Incident; the murder of three civil rights activists on August 4, 1964; and composer John Adams’ affinity for Greek chorus and the dramatization of historic figures. In fact, Adams also offers lists like this as potent sources of inspiration for his works. (Come to think of it, so does every contemporary composer.)

Critically, however, we haven’t mastered the concept of high–low, throwing in the H&M pants or the Forever 21 dress. In music, the equivalent would be regularly aiming for visceral reactions, or basing the success of a piece on pure alchemy. This is why any good performance of Sibelius’ Seventh is still an event, as is even any work of Stravinsky’s, for that matter. We listen, wanting the rare feeling of wonder that something so wrong sounds like fresh genius. It doesn’t happen often enough, but do you hear that chanting?