Ojai at Berkeley to Celebrate the Spirit of Pierre Boulez 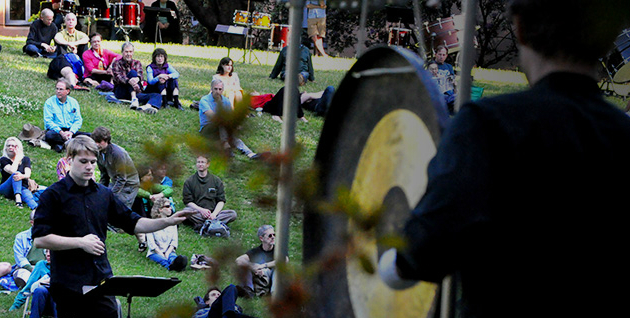 The musical legacy and spirit of French composer and conductor Pierre Boulez inspires programming at this year's Ojai at Berkeley Music Festival, running June 18-20 on the UC Berkeley campus. Over the course of the festival, its music director Steven Schick has curated works to be performed indoors and outside that incorporate his deep interest in innovative music, featuring 20th- and 21st-century composers.

"We're extending the line of Boulez into the present and future as well as looking back," said the La Jolla-based Schick, in a telephone interview earlier this week.

In its fifth year of collaboration between the Ojai Music Festival and Cal Performances, the festival (formerly known as Ojai North) opens on Thursday, June 18, with a free outdoor performance of Pulitzer-Prize-winning composer John Luther Adams' Sila: The Breath of the World (2013) on the Faculty Glade at 6 p.m.

Cal Performances co-commissioned the 70-minute Sila, which features 80 musicians grouped in concentric circles. The ensembles are positioned in various locations on the glade's sylvan landscape. The audience is free to walk around and curate for themselves selections of the piece they want to hear. The musicians, drawn from CalArts Sila Ensemble and the Bay Area, in their ensembles may, as well, change locations in the glade. The work expands on Adams' earlier exploration of sound in outdoor environments such as Inuksuit. Sila, in the Inuit context, means spirit that the world animates. The work premiered last summer at the Lincoln Center.

Cal Performances Director Matías Tarnopolsky called Sila a "visceral, immersive experience." "With Sila, the environment is the canvas on which the piece is painted," said Tarnopolsky, in a telephone interview on Monday.

The outdoor, environmental settings for Sila attracted Schick to the work by the Alaska-based Adams, who is the year's Musical America Composer of the Year. "I'm a percussionist by nature, and percussionists originally played on outdoor instruments," said Schick. "It's a spilling over from the artificial boundaries of concert halls into the natural environment.

"When you go to a concert, there's an expectation of behavior," he continued. "When you're outdoors, you're not going into the musicians' world, they're going into your world. In Sila the audience has to listen carefully, like a musician."

The ability of audience members to wander randomly during the performance of Sila is part of the work's appeal for Schick. "By being able to change your position, that enables you to reformulate your perspective."

Opening night will continue at Zellerbach Hall with the multi-media work “A Pierre Dream: A Portrait of Pierre Boulez," which will celebrate the composer's 90th birthday with a stage set by Frank Gehry. Schick will conduct the score, which the International Contemporary Ensemble (ICE) will perform with soprano Mellissa Hughes. Included will be projections of rare documentary footage of Boulez from the 1960s to the present day.

Another free outdoor event takes place on Friday, June 19, at 5 p.m. on Hertz Hall patio when Schick, a noted percussionist and conductor, will be in conversation with flautist and music thinker Claire Chase. Schick will also lead an interactive performance of Chinese-American composer Lei Liang's Trans, in which he will also play solo percussion. Through conducting, improvisation, and intense listening, Schick and the audience will work together to create wave-like textures that are evocative of natural phenomena.

Trans explores Liang’s fascination with the musical representation of environmental sounds. Scored for solo percussion and audience participation, the piece incorporates rocks, which will be distributed to audience members. According to the San Diego-based Liang, the audience forms "sonic clouds" by playing pairs of rocks, in response to the initiation of of the solo percussionist. Through conducting, improvisation, and intense listening, Schick and the audience will work together to create wave-like textures that are evocative of natural phenomena.

Part of the appeal of Trans, said Schick, is the idea that you can change how intently an audience can listen. "When you actually trust people to participate, they become invested in the piece." During the work's performance at the Ojai Music Festival, which concluded last week, 1,000 people performed Trans, he said.

Other highlights of the Ojai at Berkeley Music Festival include an evening of percussion music by composers Iannis Xenakis, Vinko Globokar, David Lang, Karlheinz Stockhausen, and Roland Auzet. At the heart of the series of concerts is the relationship between the works of Boulez and the mainly French composers who have influenced him, with performances of works by Bela Bartók, Olivier Messiaen, Maurice Ravel, and Edgar Varèse. Schick’s strong interest in innovative contemporary music underscores his curation of a concert with compositions by Lou Harrison, Julia Wolfe, Carlos Chávez, and Alberto Ginastera.

"Contemporary music can mean so many different things now," said Schick. "You can have Boulez and John Luther Adams side-by-side, and that makes sense."