Stars, In and Out of Their Element 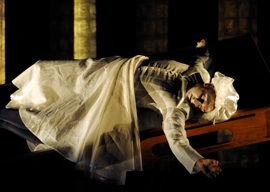 Three living legends come together in a dramatization of the life of French spy Charles de Beaumont, the Chevalier d'Éon. Almost epic in and of itself, the story tells of a spy with many enemies who went to great lengths, including cross dressing, to rewrite the rules of espionage.

If the story isn't reason enough to see Eonnagata, the sheer gravitas and caliber of talent involved continues to draw audiences from Paris to Moscow.

“Well, for one thing, I think you have to first and foremost talk about the artists onstage. Definitely, these are performers at the top of the game,” said Eric Gringras, production and tour manager for the show. “Sylvie Guillem was less known in North America — she's a real superstar of ballet in Europe. So she is very well known worldwide for dancing. And then Russell Maliphant, who's a fantastic choreographer from London who's very well known over there in Europe as well. And then there's Robert Lepage, who's a master theater director ... those three are first and foremost the reason why you would want to see a performance of Eonnagata.” 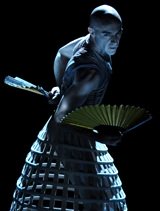 Besides talent, the intricacy and styled nature of the show is impressive.

“The other reason, also, is to see them [Guillem, Maliphant, and Lepage] in a less conventional way, because they dare to cross the disciplines that they've mastered,” said Gringras. “Robert agreed to learn dancing and Sylvie and Russell actually speak and sing in this performance, which is fairly new for all of them.”

“Sylvie [usually] will do more classical ballet or contemporary dance and Russell is definitely a strong contemporary dancer and Maliphant will do theater,” said Gringras. “So, you can tell right away where the artists are more comfortable but at the same time, that was the whole point of the project — to put themselves a little more at risk or a little more, let's say, [in] a more fragile situation so they could learn a little bit more.”

The play also uses Eonnagata, the Japanese art, from Kabuki theater, of portraying women — or men disguised as women — in a stylized manner. If Eonnagata still isn't intriguing, then consider the stellar visual design, always a major part of the impact of a Lepage show.

“I think the production values are very high caliber. For one thing, you have the deceased Alexander McQueen, who designed the costumes. They're very evocative. They combine classical lines with a contemporary outlook and I think they're a real treat to the eye,” said Gringras. “Secondly, Michael Hall, who's a lighting director from London, has done a fantastic job. That's why people will come to see the show.”