Yo-Yo Ma: Citizen of All Humanity 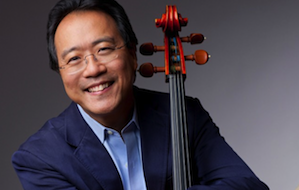 Ma is scheduled to perform the Suites No. 1, No. 5, and No. 6 of the six suites Bach wrote for unaccompanied cello. The concert will take place rain or shine, according to its organizers. (A spokesperson for Ma declined a request for an interview, citing the cellist's touring schedule.) The specific cello the Paris-born musician will play on remains to be determined, according to Ma's concert management.

In addition to the Greek Theatre date, Ma returns to the Berkeley campus on Dec. 10 as part of the inaugural Cal Performances Berkeley Talks speaker series hosted by UC Berkeley Chancellor Nicholas B. Dirks.

Cal Performances approached Ma about performing the solo Bach at the 8,500-seat ampitheatre after the cellist payed there last summer with the hybrid bluegrass-chamber music group Goat Rodeo Sessions. During that concert, the dream team of string musicians of Ma, Edgar Meyers (bass), Chris Thile (mandolin), and Stuart Duncan (fiddle) broke away from the bluegrass they'd been bowing and launched into Bach's "Three Part Inventions."

"We were blown away by how the theater could be made intimate by the right artist," said Cal Performances Associate Director Rob Bailis in a telephone interview. "We'd been operating under the assumption that music of that nature couldn't happen there."

Because Ma is the performer that he is, said Bailis, he is able to communicate the intimate moments of the suites in the large venue. "You're out of doors, it's much more public, more communal and that engagement is a game changer."

The Bach solo cello suites have early orgins in Ma's musical identity. As a young musician, he played in the Marlboro Festival Orchestra for several summers under the direction of Pablo Casals, who made the pioneering recordings of the cello suites at the end of the 1930s at the height of the Spanish Civil War.

Ma's initial recording of the solo suites more than 30 years ago won him his first Grammy Award in 1985. He re-recorded them in 1997 for a series of award-winning videos.

Written in the late 1800s the suites were relatively unknown until the early 20th century, when the young Casals discovered a manuscript in a Barcelona thrift store. Casals' recordings reflect an urgency and hopefulness, according to Eric Siblin, the author of a new book about the suites and Casals. Other musicians note a sense of peace or spirituality that the suites impart. Widely performed, the suites have also come to be associated with recent world events. In 2002, Ma played the Sarabande from Suite No. 5 on the first anniversary of 9/11 on the site of the World Trade Center, while names of the dead were read in remembrance. "It's the one he's played in the most emotionally charged places," said Bailis.

Cellist Vedran Smailović played sections of the suites in ruined buildings of war-torn Sarajaveo. As the Berlin Wall fell in1989, Mstislav Rostropovich borrowed a guard's chair from Checkpoint Charlie and proceeded to play Bach's second suite for cello. During the 2011 Occupy Wall Street protests in lower Manhattan, cellist Matt Haimovitz sat on a bucket and performed a Bach sarabande and prelude.

"The Bach cello suites are a towering accomplishment," said Bailis. "They live in a very particular place. They're some of the most transcendent music ever written. On a universal level they speak to how we live in this world together."

In December Ma will speak at Zellerbach Hall on the university's campus. In a discussion hosted by Chancellor Dirks, Ma will discuss cultural citizenship and his Citizen Musican Initiative, which he created in 2010 in partnership with Ricardo Muti, director of the Chicago Symphony Orchestra. According to Ma, citizen musicianship means always looking at the bigger picture.

"Music is not a product but a living thing," said Ma, in a video on the citizenmusician.org website. "Success is reached when the performer can take a content that they've worked really hard at and they can transfer it through their techniques into the hearts and minds of someone else, and it lives there. Then [their] job is done."

Ma's big picture view of how culture plays a key societal role connects with Chancellor Dirks' vision of UC Berkeley as a global university, according to Bailis. "It's precisely why we came to Yo-Yo," said Bailis. Through its cultural presentations and programs, Cal Performances, he said, is deepening engagement with the idea of how artists contribute to society. "It's not just the art that's transformative," said Bailis, "it's the artist as a citizen."