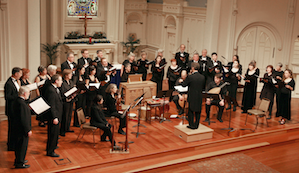 O.K., maybe you’re thinking King Wenceslas not Henry VIII, but you can usually trust choral director Paul Flight’s inventive programming, so don’t judge this concert by its title. Early music afficionados know that the English caroling tradition begins in medieval times, in the 14th and 15th century. The CBS takes us on a full tour from ancient to modern, with a few larger-scale pieces added in along the way.