Any singer who has performed Beethoven’s Missa Solemnis can attest that this is one piece not for the faint of heart. Listeners may exult in the music’s vast landscape and emotional power, but for vocalists Beethoven’s many passages of strenuous writing, not to mention the composer’s willful disregard for ease of performance, can make for an exhausting experience. 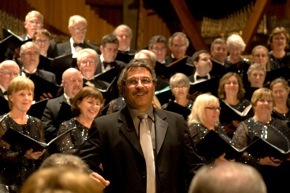 It therefore takes some gumption for even a professional organization to tackle this work, let alone a community ensemble. Yet this is precisely the challenge adopted by the 100-voice Cantare Chorale, part of the umbrella organization Cantare Con Vivo, led by Artistic Director David Morales, which performs the mass March 19 at Walnut Creek Presbyterian Church.

One thing the chorale has on its side is history: Its debut concert in April 1999 featured none other than the Missa Solemnis. Another is Morales’ deep investment with the score, having edited it with “over a thousand details,” in his own words. Morales finds Beethoven’s work “profound, unrelenting, and unapologetic in its demand of personal energy, depth of commitment and investment. Beethoven is reaching to communicate an understanding of our human existence with that which is above and beyond us, well beyond these traditional texts and their origins.”

It is these human concerns that anchor Morales’ efforts to put his own stamp on this work. “My approach with the singers,” he remarks, “includes involving them in a dialogue around the themes given us by Beethoven,” such as the depth of his pleas for mercy in the Kyrie, or the exultant praise evident in his Gloria. “Without this conversation, both as a group and individual reflection, it is impossible to sing, to sustain the high tessitura and fortissimo dynamics that Beethoven demands. Worse yet, the listeners will not be challenged, touched, or transformed.” 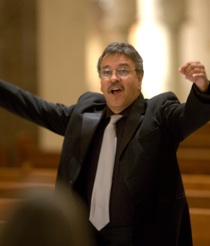 Morales also strives to balance more practical considerations, such as keeping singers healthy and not enforcing too many demands too early in the process. “A major principle of mine comes from [renowned choral director] Robert Shaw — ‘save the golden voice,’” he says. “We rehearse count-singing at piano dynamic with sopranos down an octave on higher pitches, then on with diction, then articulation (accents, marcato, legato, etc.), and only after having those solidly in place do we go for dynamics, adding all these mastered rudiments.”

As part of the ensemble’s larger mission of bringing choral music to underserved populations, the chorale will also present a free performance March 18 at Allen Temple Baptist Church in East Oakland, funded by grants from the James Irvine Foundation and the City of Oakland. “We are collaborating with the church, well-known and respected for its ministry to the community, in promoting this concert,” says Morales. “Cantare and Allen Temple Baptist share a common mission in building compassion across those boundaries which separate, using the powerful language of music as a resource of beauty and transformation. This is a very special and unique event, and I can’t think of anything as grand as the Missa, with choir, orchestra, and soloists, ever taking place in such a fashion in the Bay Area.”