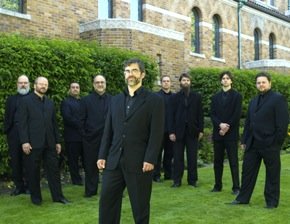 As Alexander Lingas beheld the shattered remains of San Francisco’s Annunciation Cathedral, devastated in the 1989 Loma Prieta earthquake a few months earlier, he wanted to help. The singer had moved to the city in June 1990 with his new wife, Ann to San Francisco, a violinist who was studying at the Conservatory of Music. The couple joined the city’s Greek Orthodox Cathedral of the Annunciation, where Lingas, then a musicology graduate student at the University of British Columbia, became lampadarios, or assistant cantor. He’d arrived at a troubled time: the Annunciation Cathedral lay in ruins, and the church actually held services in the Bausch & Lomb building. The city’s orthodox community was beginning to figure out how to rebuild. For an impoverished graduate student, financial assistance was out of the question. The one thing Lingas could offer was music.

Before taking up his graduate studies in Vancouver in 1988, Lingas, a native of Portland, Oregon, had formed an early-music vocal ensemble during his undergraduate years at Portland State University. (He also sang with the university chamber choir and the splendid local choir Cantores in Ecclesia.) The group had sung music of Monteverdi, Schütz, and other Baroque composers. Lingas had also been singing Greek and Byzantine music during church services. He knew how to put together a concert program, and he’d stayed in touch with his fellow singers in the Portland and Vancouver early-music circles. In early 1991, he resolved to bring them down to his new home for a concert to benefit the cathedral rebuilding project. Lingas compiled a list of pieces he’d seldom or never heard live. “It was very much a young man’s concert,” Lingas recalls, “with everything but the kitchen sink”: early Byzantine chant, Stravinsky, Rachmaninov, all the way through contemporary Orthodox composers John Tavener and San Francisco’s Tikey Zes. After a first performance at a Portland church, the singers piled into a van and headed south. The Greek diocesan house offered the young musicians a place to stay, along with a big, postconcert spaghetti dinner with freshly cured Greek olives. Nearly 300 listeners came and donated to the cathedral.

The group needed a name, so, to evoke the Byzantine empire’s Roman heritage and the medieval Greek concept of a religious world that embraced Rome and Western Europe as well as the Slavic regions and other lands of the old empire, he called it Cappella Romana, or “Roman Chapel.” On March 26, the group returns to its Bay Area roots during Hellenic Cultural Week to present a 20th-anniversary concert at the rebuilt Cathedral.

In the two decades since its founding concerts, the professional vocal ensemble has gone on to become the premier exponent and explorer of the musical traditions of Byzantium and other early Christian music, Lingas being one of its leading scholars. He and other researchers have found and revived long-dormant repertoire, which the group sings in its original Byzantine and Slavic languages. And it has performed music of contemporary European and North American composers who draw on those traditions, such as Arvo Pärt, Ivan Moody, and Michael Adamis, along with several North American premieres of Tavener’s works, and more, including one of Lingas’ specialities: polyphonic and harmonized Greek-American music brought by Orthodox immigrants over the last century or so and adapted to North American environments, including a West Coast school of contemporary composition in that tradition.

Although it’s based in Portland and performs several concerts each year there and in Seattle, the group draws singers from around the country, including the Bay Area. It has performed in Europe and Canada, and in Los Angeles, New York City, and many other cities; appeared on National Public Radio and in various early-music festivals and even at New York’s Metropolitan Museum of Art; and earned glowing reviews wherever it sings, securing its reputation as one of the Northwest’s most accomplished musical institutions.

Lingas now lives near London, where he’s a senior lecturer in music at City University and a Fellow of the University of Oxford’s European Humanities Research Centre, writing scholarly articles and books. Cappella Romana has recorded nearly a dozen CDs, with several more in the works. In recent years, the group has reestablished its early Bay Area ties. Orthodox communities in the area (as well as in the Pacific Northwest and Southern California) have long supported the group; the orthodox bishop, or Metropolitan, is the honorary chair of Cappella’s board of directors; and singer John Boyer, now studying in Boston, is first cantor of the San Francisco diocese. It has sung music by several Bay Area composers working in the West Coast school of Orthodox composition, including the retired San Jose State professors Zes and Theodore Bogdanos, and Belmont’s Steve Cardiasmenos, and has recorded two disks of Zes’ liturgical music. Two years ago, the ensemble returned to the Bay Area with a concert of medieval music at Stanford University.

The March 26 program includes medieval Byzantine chant, the three Bay Area composers listed above, Greek composers Adamis and Nikolaos Mantzaros, and the first movement of Moody’s acclaimed setting of The Akáthistos Hymn. The next week, they’ll be back at Stanford to begin work on a research project that aims to understand and re-create the acoustics of ancient Byzantine churches. Once again, the concert proceeds will benefit the Annunciation Cathedral Building Fund. In a way, Cappella Romana has never stopped the reconstruction project that inspired its birth: rediscovering, restoring, and reviving this rich, long-neglected repertoire, while creating a space for its continuing creation.