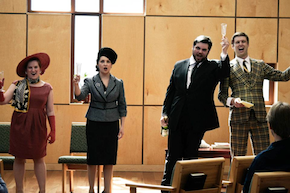 Wolfgang Amadeus Mozart, fond of sweets and composing operas, might just pronounce the frothy finale after the finale of Waffle Opera's production of his The Magic Flute, "Yummy." No sooner than the last applause can patrons adjourn to a hall to form a buffet line for free waffles, covered with whipped cream, chocolate syrup, and strawberries.

Serving waffles after a performance creates a sense of community, according to Ted Zoldan, who directs The Magic Flute. "We not only ask our audiences to share the art we're presenting, we're asking them to share our food and our company," he said.

The current production takes its cue from Zoldan's desire to stage a bold vision of the opera with a basic set, no chorus, a very small orchestra led by music director Ben Malkevitch, and performed in a very small theater: The Center for New Music in San Francisco seats 55.

"We're taking a page out of the book used by puppetry, mime and dance/theatre groups — we're not just pulling from operatic tradition," said Zoldan, who began his musical career as a tenor but shortly moved to working behind the scenes and directing. "It's much more in-line with my career goals."

A love of opera and breakfast foods led to the founding of Waffle Opera in 2012 by a small group of like-minded musicians, according to Zoldan, a founding member of the company. "We don't really have an artistic director as such because we function more as a collective," he said.

Like many collectives, Waffle Opera serves up an artistic manifesto menu on its website that includes such tasty stalwart assertions as:

The idea of breakfast for dinner has many fans. Why, however, call the ensemble after waffles instead of, say, pancakes, French toast or Rice Crispies? "One of our members had a terrific waffle recipe, and it was an attention-getting name," explained Zoldan. "There are so many companies in the Bay Area so we wanted to set ourselves apart. Waffles seemed like something everybody loves."

For this production of The Magic Flute Zoldan sought not to deconstruct the beloved classic as much as hone in on its unique qualities. "We asked, 'how can we get to the heart of this complex, very misunderstood work' because with this opera the focus is mostly on the spectacle and not on the humanity," he said.

"Our focus," he continued, "is on low-tech, theatrical magic that you see from student productions to Broadway."

In reconceiving the opera, Zoldan chose to keep the singing in German but to use English for dialogue. "Our audience is primarily English speaking and we don't want to lose them, " he said. Zoldan used a pre-existing literal translation of The Magic Flute and then worked with that to arrive at the spoken text: "It's an adaptation, not a translation."

With one intermission, the two hour and 50-minute production runs for two evenings and a Sunday matinee. All ages are welcome at performances, said Zoldan, noting, "We don't position ourselves as a family opera company, although The Magic Flute is a very familly attractive show."

The complimentary artisan waffles, whose recipe Zoldan did not disclose, only reassuring that "they are very, very good," will be served buffet style, according to the opera troupe's tradition. "We'll be handing them out as long as they last," he said, adding, "We're in this for the art rather than for the money."