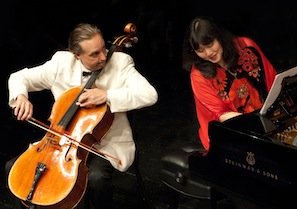 Beyond sheer musical excellence, Wu Han and David Finckel have also set unique records being ever-present, feverishly busy, long-lasting, and a blessing to generations of young musicians. Playing and recording together as long as they have been married — more than three decades — they were named among Musical America’s 2012 Musicians of the Year. More? The pianist and cellist:

... and there is much more, but space is limited. On the occasion of the duo's appearance at Cal Performances on March 24 in Berkeley's First Congregational Church, Finckel's announcement of retiring next year from the Emerson String Quartet (where he's been the ensemble's only cellist since 1979), and preparations for [email protected]'s 10th anniversary, SFCV caught up with Finckel to ask a few questions.

About joint concert performances: How have the dynamics changed, developed between the two of you over the years?

Some things have of course changed and some have not. We find most remarkable that fact that the special chemistry we feel making music together was there from the very first notes we played together back in the early 1980s. It’s mysterious and we don’t understand it, but between musicians it either happens or it doesn’t, and when it doesn’t, I don’t think any amount of rehearsal, discussion or years of playing together can fix the problem.

Naturally, over time we have each become more experienced musicians, having learned much music and played with many great collaborators. This deepening of knowledge has brought not only more artistic discretion to our performances, but also even more inspiration, passion, and in some cases, abandon.

Something of special interest to you about the Cal Performances program?

Our recital program for Saturday is a journey around the 19th century, beginning with the Schubert at the dawn of the Romantic age, looking back to the Baroque with a romantic eye in the Brahms first Cello Sonata, blossoming into hyper-romanticism with the Schumann, and finishing with Brahms's second Cello Sonata, a musical tour de force that synthesizes Classicism and Romanticism.

All in all, we hope to show that the 19th century was by no means all about one kind of style, but had a richness of musical invention and development to rival any era in history.

What about the specifics of "pursuing other projects" you cited in the Emerson announcement?

To leave a long-time position "to pursue other interests or projects" is almost a stock phrase that is used to protect the protagonist from giving the impression of retirement. I have certainly made good use of it in the case of my departure from the Emerson Quartet, but anyone who has read even one sentence of my current biography knows that I am up to my ears in other projects and interests already.

This deepening of knowledge has brought not only more artistic discretion to our performances, but also even more inspiration, passion, and in some cases, abandon.

Those projects — such as solo and duo playing and recording, [email protected], and the Chamber Music Society of Lincoln Center — have been calling to me ever stronger over recent years, and if I am to answer those calls with proper dedication and attention, I simply need more time.

What does the [email protected] 10th anniversary mean to you, what is the status of the organization, and what are long-range plans?

The upcoming anniversary season is a huge source of pride and excitement for me and Wu Han, of course, but just as much for all of those who have worked so hard to make this dream of a music festival possible. It is a time to draw inspiration for the future from the richness of our past, from a decade so packed with content and experience that it seems like at least 20 years. 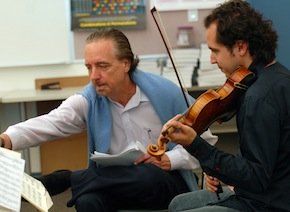 Plans for the future include securing the financial base of the festival strongly enough that we may focus as freely, deeply and broadly as required on the music itself and the theme of each festival, while continuing to bring new listeners to the art, and all the while nourishing the incredibly gifted young generations of musicians that the festival serves.

I just found out that the S.F. Symphony's (to me wondrous) Keeping Score will not produce new DVDs and public television programs because, say the SFS officials, they are too costly and PBS is both limiting time, and experiencing a steep reduction in viewership of music programs. Would you comment on the state and future of Menlo's rich electronic outreach?

Electronic media, from CD recording to radio to the Internet, with its myriad possibilities, has greatly influenced the way classical music has been experienced over the last century. In our time, large resources have been invested in media by classical music organizations seeking to widen their audiences, engage them more, and hopefully increase revenue.

At [email protected], we pride ourselves in taking advantage of every opportunity and technology within our grasp to communicate the festival’s offerings to our public. But communication implies not only that we are talking but also that someone is listening, and putting people in the right frame of mind to listen, to be curious, to want to try something new, is about a thousand times as challenging and interesting to us as embracing the latest online tool for networking, or stuffing even more information into a more easily accessible format.

Doesn’t a pistachio nut taste better after you’ve worked a bit to get it out of the shell? Yes, we are excited and proud to offer the festival’s content via cutting edge technology, but technology is only as good as its results, and is not an end in itself. We are more proud that our listeners have grown to be curious, to trust us not to waste their time with bad music and bad performances, and to want to learn and broaden their musical knowledge and enjoyment through the festival. The curiosity we help to create within each listener has been the goal of [email protected] ever since we first imagined what an ideal music festival should be. Technology and media have played big parts in our success, but quality of content and the creation of personal musical resonance remain our highest priorities.