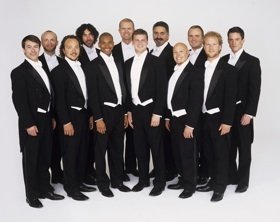 Among the essential qualities of a successful English Renaissance composer, flexibility must have ranked high on most people’s lists. Rapid power shifts among 16th-century monarchs prompted drastic upheavals in aesthetic thought, requiring that composers quickly adapt to the musical or religious ideals of whoever happened to be in charge. The end result was music of startling diversity, with composers of different generations (or even a single composer in different career phases) cultivating highly varied melodic, rhythmic, and textural styles.

A panorama of this creative smorgasbord goes on display in Chanticleer’s final season concert, “For Thy Soul’s Salvation: Music for England’s Monarchs,” presented June 2-5 in Berkeley, Sacramento, San José, and San Francisco. Surveying the country’s polyphonic tradition from Henry VII through Charles I, Chanticleer’s program centers on composers associated with the Chapel Royal, England’s most prestigious musical establishment. The roster is an impressive one, from early figures Fayrfax and Tye to mid-16th-century figures Tallis and Sheppard, plus later music by Byrd, Gibbons, Tomkins, Mundy, and Parsons.

“We start with the early music — these large votive anthems in Latin polyphony. But then, all of a sudden it’s straightforward English hymnlike things as we go into later decades,” says Matthew Oltman, Chanticleer’s music director. Tallis’ music in particular embodies the contrary impulses generated by the revolving door of midcentury ruling factions, from Edward to Mary to Elizabeth. “Tallis appears three times on the program, but with music of very different eras and styles,” Oltman observes. “That’s the journey that the audience will be taken on — a very traumatic and dramatic journey through English history.”

Although embracing an extremely broad repertory, in a range of idioms, Chanticleer’s 12 singers find particular comfort in performing Renaissance polyphony. “Early music is innately vocal music that just feels so good,” Oltman says. “On a touring program, which we do most often, our voices are pulled in all different directions. We sing some Renaissance, some contemporary, some gospel/jazz, music with sound effects, etc. Suddenly, to then go back and do an [early-music] program that’s so wonderfully singable: not only does it just feel good, but you go back into basic techniques and remember what it feels like to sing beautiful lines.”

These varied program configurations create special expectations for local audiences, distinct from those encountering Chanticleer on tour or in recordings. “Our home audience gets much more specific types of concerts, like the current program. That’s not typically something we tour with,” Oltman notes. “Bay Area audiences tend to get a cumulative effect, hearing us do all types of music over long periods of time. We can indulge them in one style for a whole evening, then take them in a different direction several months later.”

The upcoming English program also affords Chanticleer an opportunity to connect with its own tradition of early-music performance. “Doing an early-music program is returning to Chanticleer’s roots,” says Oltman. “Those original guys 32 years ago were wanting to sing that early music; that was the original passion. It’s remained in our repertory for good reasons. It’s the music that teaches us to sing as an ensemble. It’s like going back to the ABC’s and remembering what choral singing is really like.”