With a fraternal nod to Julie Andrews, the men of Clerestory are set to open their fall season with more than a few of their favorite things. While they're not about to climb a mountain, their concerts in Palo Alto, San Francisco, Berkeley, and Lodi are filled with music that members of the eight-man a cappella choral ensemble love the most. 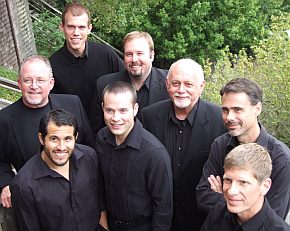 Jesse Antin, who founded Clerestory in 2006 after recruiting all his fellow Chanticleer veterans who had settled in the Bay Area, boasts that Clerestory’s members “take collective ownership of everything the group does. All eight of us are an equal and important part of the leadership and artistic direction.”

Thinking along those lines, Antin wondered what a concert would sound like if each singer contributed his favorite music for male chorale. To his delight, the repertoire was quite diverse. “Our Favorite Things” begins with early music (Gregorian chant, Mouton, Taverner, Desprez, Ockeghem, Pipelare, and Byrd), and then time-travels after intermission into more recent music (Debussy, Saint-Saëns, Poulenc, Parry, Warlock, Taverner, Britten, and arrangements of four English folk songs). Antin considers it a fairly good mix of sacred and secular music spanning multiple centuries.

Clerestory has also shucked the traditional historical program notes. In their place, each singer has written a short explanation of what he finds especially attractive in his chosen work or works.

“The first half includes one of my favorite movements from a Byrd mass,” says Antin. “There’s also a piece that Desprez wrote lamenting the death of Ockeghem, and Taverner’s wonderful Magnificat. While there’s nothing from the 21st century this time around — the most recent piece is by Taverner — we recently performed a concert called ‘Explorations’ that mixed rarely performed early music with premieres of works by me and students from the San Francisco Conservatory of Music.” That concert, like many others Clerestory has performed, is available for your listening pleasure on the chorus' Web site. You can also download concert recordings without charge in highest quality MP3 sound (320 kbps).

Though Clerestory does not deliberately aim for a different sound than Chanticleer, the fact that Clerestory's members are in general older and more experienced adds maturity to their blend. In addition, when Clerestory’s members perform music that does not call for sopranos and altos, the men who usually sing in that range instead sing tenor, baritone, or bass.

“I've been singing with some of these guys for almost 10 years, ever since I moved to California,” says Antin. "We all feel we're a part of the Bay Area musical community, and want to connect with our audience members as neighbors.” Hence, the spirit of giving that is at the heart of Clerestory's “Our Favorite Things.”