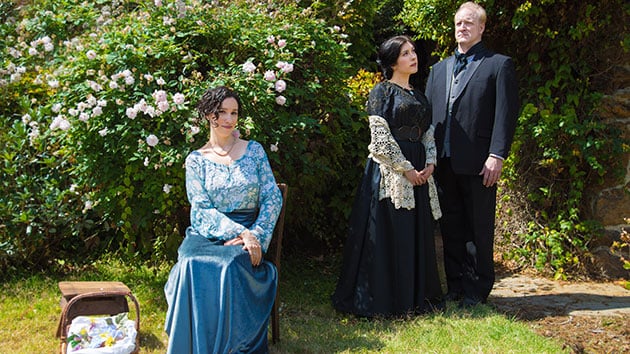 Contemporary music meets classic literature in Composer Inc.'s upcoming premiere of Middlemarch in Spring based on the great romantic novel, Middlemarch: A Study of Provincial Life by George Eliot, first published in 1872. Local composer Allen Shearer and librettist Claudia Stevens bring this complex story to life in the form of a two-hour chamber opera using six characters from the novel and a small chamber orchestra. The opera has taken four years to complete.

I recently chatted by telephone with Shearer and Stevens (who are married) about what it was like to  create this new work together. They had collaborated previously on two short one-act chamber operas.

The inspiration for this opera occurred—in the bath.

"This whole project began when Allen asked me for just a short scene for two women and one man, and I thought goodness, what could that be?" said Stevens. "I was just sort of splashing around and I remembered the opening scene of Middlemarch where the two sisters sort of reveal themselves in their relation to the jewelry that has been left to them. And it is such a stunning and brilliant opening chapter, it just sort of sets the stage for the whole novel.  Once we had come up with that scene and had a semi-staged version of it performed, I thought, you know, we just can't leave it at this. It has to become more, just like it did in the novel."

Both Shearer and Stevens are singers, composers, and performers, which has worked out well for their collaboration. "We kind of got into each other's acts with this project," said Shearer.  "It was not a strict division of composer and librettist. I had a lot to say about the libretto, and about how certain things should go, even though I didn't actually draft the words, and I did make some crucial, detailed suggestions. Claudia is trained as a composer, performer and singer, so when it came to finishing the music, she was very helpful. And of course, the working conditions were excellent," he added with a laugh, “because we see each other at breakfast every morning and the main topic of conversation is usually the opera."

I asked them if they felt that being married and collaborating well on the music played an important role in the creation of the opera. "That's really true," said Stevens. "I have heard examples of where composers and librettists just can't agree and they are on opposite sides of the globe and I can't imagine what that's like. But we could just talk about a particular issue or spot in the music and immediately address it while the creative juices were still flowing for both of us. There was a constant interaction that was such a pleasure, really the greatest pleasure I have ever had as a creative writer and musician ... it was the ultimate joy."

There are only four performances planned at this time, and I asked them if that was disappointing, after working on the opera for so long.

"There is a great satisfaction in getting there, too," said Shearer. It is the journey, not the arrival that matters. It doesn't seem like a terrible waste of our time because we have enjoyed every part of it, so the gratification is not just from the performance."

They do, however, hope to take the opera other places, and in particular, the U.K. In addition, they are already thinking about their next collaboration, a one-act comedy based on a short story by Chekov, that will give them another opportunity to experience the joy of creative collaboration, on a project that Stevens said should be "silly and fun."