C is for Crowden, A is for Adams: Benefit for the Love of Music 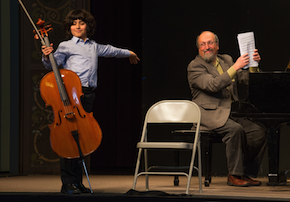 The Crowden Music Center and its day school in Berkeley for grades four through eight will celebrate three decades of music education with a benefit concert featuring the world premiere of a new work from the composer Samuel Carl Adams, an alumnus, on May 24 at 7 p.m. at UC Berkeley's Hertz Hall.

The Crowden School orchestra and chorus will perform música, Adams' composition for unchanged voices and strings, which the school commissioned in honor of its 30th anniversary and was funded by the East Bay Community Foundation.

Adams, 28, the son of the composer John Adams and the photographer Deborah O'Grady, and a sought-after composer in his own right, attended the school from grades five through eight, and graduated in 2000. After considerable time searching for the right text upon which to set música, he found the poem Concierto en el jardín by the late Mexican poet Octavio Paz, and it was kismet.

"I felt the only subject matter for this piece had to be about music itself," said Adams in a telephone interview from his Oakland home, where he relocated in 2013 after several years living in Brooklyn. The brief poem, he said, "Points to the mystery behind music and what it can do for us not just as musicians but as humans." 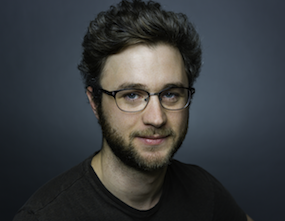 Others scheduled to perform include alumni who attended the school at some point since Scottish violinist Anne Crowden founded it in 1983 in a Berkeley church basement. They include Menuhin Competition winner Kenneth Renshaw; New York-based violinist/violist Owen Dalby; and members of the Baumer String Quartet (Nathan Olson, co-concertmaster of the Dallas Symphony, Aaron Requiro of the Pheonix Symphony, and Naumburg Award winner David Requiro). Other performers include Crowden faculty, students, and musicians Deirdre Cooper, Bonnie Hampton, Emil Miland, and Baumer Quartet violist John T. Posadas.

The anniversary benefit will raise awareness of Crowden and strengthen its ties with Cal Performances, according to Michel Taddei, a double bassist who directs the center's artistic administration. 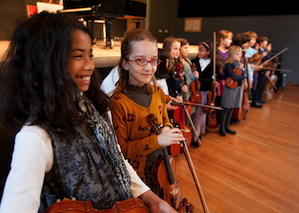 "Playing in Hertz allows us to reconnect with members of the broader musical community and strengthen the network of relationships we have created over 30 years," said Taddei in an email. "Presenting in such a public venue emphasizes how far we have come. We also have been enjoying a relationship with Cal Performances that continues to develop, with amazing artists from their series coming to us at Crowden, and reciprocity in supporting their programs, such as the Fall Free-for-All."

The nonprofit Crowden Music Center currently serves 1,400 aspiring music students of all ages, and reaches a wide audience through an array of workshops, events, and concerts each year, according to its director of publications and public relations Jennifer Strauss.

"The emphasis at Crowden is on developing ways for children to maximize their potential through all levels of learning through music ... music is our philosophy," said Strauss of the school's curriculum that combines academic classes with training in musical instruments, voice, and theory.

The love of music underscores the Crowden Music Center's mission to combine music and education to students and the community as Anne Crowden, who died in 2004, envisioned when she founded the school, according to Taddei.

"Our day school program continues to fulfill Anne's dream of an academy where students would receive an excellent academic education in balance with an in-depth, ensemble-based music program, in which having enough time to practice and being fully supported in their musical development are key elements," said Taddei.

Many current music faculty members and senior administrators studied, or worked closely with the school's founder. "So there is a level of continuity in the mission," Taddei said, noting that concerts have been presented since the school's earliest days. "That being said, much has changed."

The student body and faculty have increased. Crowden's community music programs, which began as after-school lessons and some ad hoc ensembles that its founder coached, have developed into a diverse schedule of lessons, and early childhood music classes both at Crowden and in the Berkeley public schools. The center also offers the John Adams Young Composer Program, musical ensembles for youth and adults, Community Music Day, and a variety of summer programs.

Sam Adams remembers coming to the Crowden School when it was at its initial location in a church basement. His older sister, who was studying violin with Anne Crowden, had been enrolled at the school for two years when Adams joined her. "It seemed to make sense for me to go there as well," recalled Adams, who had studied piano since age 5. No prompting of parents to take piano lessons, he said: "I wanted to play."

When he arrived at Crowden he had to pick a string instrument. "I had a choice between the viola and the double bass," he recalled. "No surprise I chose the double bass." Adams continued with piano and double bass throughout his years at Crowden and through college at Stanford and graduate school at Yale.

His years at Crowden School — now nestled in a residential area of Berkeley — were influential. "It really affected the way I write music," he said. "As a composer it is very important for us to understand how music works. I started studying music theory in fifth grade and by the time I finished at eighth grade, I had done about what a college graduate would have done." Adams said he remains in touch with his Crowden music theory teacher Arkadi Serper, who continues to teach at the academy.

"I don't feel like this is a homecoming in any way, because I have maintained very close ties with the school since I left" said Adams, referring to setting his new work música on the Crowden orchestra and chorus for the benefit concert. "Being there in the morning to rehearse with the students is really inspiring."

Does Adams see a 10-year-old version of himself while at Crowden during the rehearsals? "No, because they're all more behaved than I was," he said in good humor. "They have a certain kind of clarity of focus. The piece I've written for them isn't easy at all. It's been really incredible seeing how nimble they are."

Tickets to the 30th anniversary concert are available for purchase online at crowden.org and CrowdenIs30.bpt.me. Admission is $25 general and $15 students/seniors. Limited premiere seats are available for $75 and include an invitation to an exclusive "Meet-the-Artists" reception at the Bancroft Hotel following the concert.

On Sunday, May 25, the general public can view at the school an exhibit on Anne Crowden and her students that the Berkeley Historical Society has curated. Earlier that morning Crowden alumni will gather for brunch and some chamber music to celebrate the school's 30th anniversary.