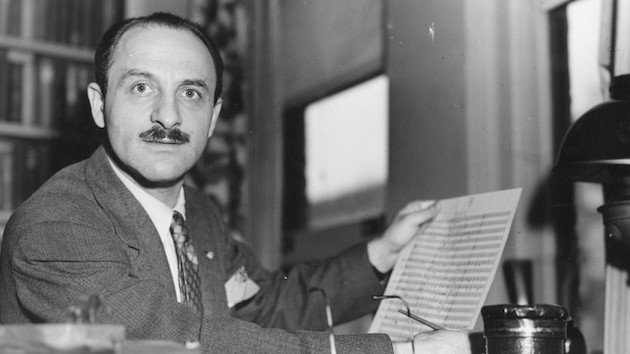 Marc Blitzstein was the mid-20th-century American composer best known for The Cradle Will Rock, which grew out of a scene from a musical he was working on in the early 1930s. The heroine, Moll, was a prostitute. Bertolt Brecht, a family friend, suggested Blitzstein extend the metaphor: “Why don’t you write a piece about all kinds of prostitution — the press, the church, the courts, the arts, the whole system?”

Cradle was produced in 1937. Orson Welles directed. The opening performance was shut down by the Works Progress Association, which owned the sets, costumes and properties through its arts program, the Federal Theater Project. The official reason was budgetary – the WPA’s budget was slashed that year. But behind that was likely the House Committee on Un-American Activities (HUAC), which was offended by the idea that left wing convictions were being subsidized by the government.

The show went on, albeit in reduced circumstances. It would eventually reach Broadway and Off-Broadway. Leonard Bernstein called Cradle a “forerunner of American opera.” In 1999, Tim Robbins directed a film version.

Marc Blitzstein was a spindly man with narrow shoulders, a large head and a moustache. He grew up in a wealthy family in Philadelphia, studied at the Curtis Institute for Music, acquired a reputation in music circles for being a snob, and continued his studies in Europe with Arnold Schoenberg and that force-of-nature, Nadia Boulanger.

In 1943, Blitzstein joined the Air Force, then part of the U.S. Army, and wrote a number of pieces, including the Airborne Symphony, which grew out of a score he’d been assigned to write as part of a film about aviation history. 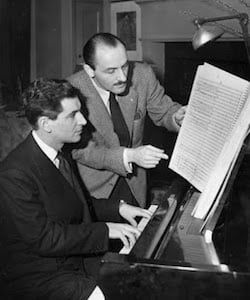 In May 1945, Blitzstein returned to America, but his score for Airborne was lost on the way. Nevertheless, he was able to recall enough from memory to dazzle his friend, Leonard Bernstein, who conducted the premiere by the New York City Symphony, in April, 1946, and then revived it 20 years later. The symphony, which is huge and part choral cantata, is divided into three sections and describes the evolution of flight, from Kitty Hawk to World War II. The lost version was eventually found, but by then Blitzstein had reconstructed the piece and preferred the new version.

Critics compared the sound of the work to Shostakovich, Barber, or the early works of Stravinsky.

After All These Years

Now, 70 years later, Airborne will have its West Coast premiere at 8 p.m. on Saturday, May 28, at the San Francisco Conservatory. The production is by Curious Flights, which was formed by artistic director Brenden Guy in 2013 to explore unique or seldom played works, by both well-known and obscure composers.

“This was considered a propaganda piece by many critics,” Guy told us the other day, “and so didn’t draw much interest. When I opened the box, you could tell by the smell that this was something that hadn’t been performed in a long time. There were a lot of things to be worked out. For example, there was no piano-vocal reduction, where soloists could play along with piano and work out the music.”

Guy notes that the symphony is almost like a musical and both familiar and at moments grotesque, as it explores certain Nazi themes.

“It’s a little unnerving,” he said and added. “And because it’s so difficult to stage, I don’t think it will be performed [again] for a long time. This is really a one-time deal.” 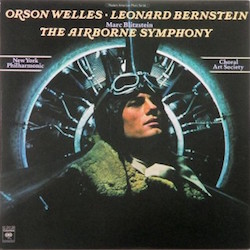 Blitzstein, whose composing style was avowedly populist, drawing from different genres, was himself a social activist and briefly a member of the Communist Party. In 1958, he was called to testify before HUAC but questioned why he should be called to the committee at all.

Blitzstein was also openly a gay artist at a time when that was very dangerous.

“Now,” he said once, revealing the tragic, internalized guilt of many LGBTQ people of that era, “I accept what I am; really, knowing all it involves. In this light, it is absurd to assert that there are no sins; there are definitely cardinal sins -- sins against oneself, against one’s law. My sin is, has been, vanity of this special sort; the willingness to corrupt my nature.”

In November 1963, Blitzstein decided to winter in Martinique. From John Jansson's Blitzstein website, an account of what happened two months later:

“Late one evening, in January 1964, following a session of heavy drinking, he had picked up three Portuguese sailors. Exactly what happened next is unclear, but it seems that whilst travelling between bars, one slipped into a nearby alley with Blitzstein in response to his sexual advances. The other two followed and all three robbed him, beat him up and stripped him of all his clothes except his shirt and socks.

“The police found him moaning and crying in the middle of the night, and took him to a hospital. The injuries did not appear serious, but he was bleeding to death from internal contusions and he died the next evening, January 22nd, 1964.

“Leonard Bernstein, learning of Blitzstein's death as he was in his dressing-room preparing for a concert, dedicated the performance of the “Eroica” he was about to conduct to Blitzstein's memory, and wrote the following of his friend; ‘(He) was so close a personal friend that I cannot even begin to measure our loss of him as a composer. I can only think that I have lost a part of me, but I know also that music has lost an invaluable servant. His special position in musical theatre is irreplaceable.’”