This Show Is Your Show: A Tribute to Guthrie

Woody Guthrie’s American Song, the award-winning musical based on the life and music of the iconic American folk singer, returns to the Freight & Salvage on Thursday, July 17, in a concert production for four performances, including a Sunday matinee. 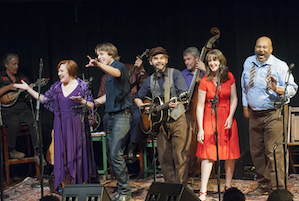 The show previously played at the Berkeley concert venue two years ago to coincide with what would have been the 100th birthday of the folksinger, who died in 1967. East Bay resident Peter Glazer wrote and directed the work with music director Jeff Waxman. In two acts, the theatre piece frames the singer's life and words through a selection of his songs.

From the Dust Bowl of Oklahoma at the dawn of the Great Depression, the show follows Guthrie west to a migrant camp in California and east to a Bowery bar in New York. Songs include 20th-century American folk classics by Guthrie such as Bound for Glory as well as lesser-known songs, such as Jolly Banker and Ludlow Massacre.

Glazer and Waxman fine-tuned the musical over the course of its various productions. "It's absolutely evolved and changed over the years," said Glazer, in a telephone interview. By 2008, while staging the 20th anniversary production in Boulder, Colorado, the two creative partners realized the work was finished. "It's done, it's cooked," said Glazer, recalling the moment.

A chance reading of Guthrie's collected stories, essays, and drawings, Born To Win, in a Greenwich Village bookstore in the mid 1970's inspired Glazer, working at the Public Theatre at the time, to use the writings as a setting for the singer's songs. The book's first essay, "The People I Owe," made a strong impression on Glazer, who had made his way to New York in 1975 after college to pursue professional theatre.

'The essay completely captivated me," recalled Glazer, now an associate professor in the Department of Theatre, Dance, and Performance Studies at UC Berkeley. "Woody said he owes everybody for what he did. That it was a book of debt and part payment. It struck me as a metaphor for theatre because theatre is a give and exchange."

As Glazer began working on the piece he realized that he didn't want it to be a one-man show and he wanted harmony. The result: Several actors play Woody Guthrie in the musical, which invites audience engagement at various places, said Glazer. "This will be a great show for families," he said, noting Sunday's matinee performance at 2 p.m.

Glazer grew up with folk music. His late father was folksinger and composer Tom Glazer, who enjoyed commercial success with his 1963 recording of the song parody On Top of Spaghetti, based on the tune On Top of Old Smoky. Glazer senior was part of the folk music scene in New York in the 1940s, and with Lead Belly, Woody Guthrie, Pete Seeger, and Josh White helped set the stage for the successful folk revival of the 1960s. Peter Glazer never met the writer and composer of This Land Is Your Land. "He was already hospitalized by 1955," said Glazer, who was born in 1953.

"I think I had a radar for Woody that I might not have had because of my Dad," Glazer said. His parents saw the musical a number of times. "My Dad gave me notes."