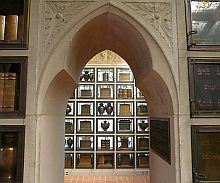 The Bay Area has its own annual musical event to mark the summer solstice, the real beginning of the season of plenty. It’s the Garden of Memory concert hosted each year at the Chapel of the Chimes and presented by New Music Bay Area. The building was designed by Julia Morgan in 1926 in Mission style with Gothic interiors. Because the building and grounds feature enclosed areas (to increase privacy in this columbarium), Sarah Cahill, the event’s founder, discovered that it’s possible to sequester a number of separate performing groups or musicians in its recesses and spaces, without much sound overlap.

The concert’s concept is as intriguing as it is fun. You enter and wander about, pursuing distant, half-heard sounds, and come upon unexpected performers doing all kinds of new music from voice-and-electronica wizards like Amy X 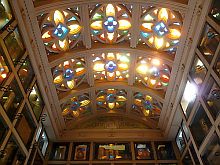 Neuburg and Pamela Z., to the lounge music group Orchestra Nostalgico, to new percussion music by the William Winant Percussion Ensemble, Joel Davel, or Nino Robair, to computer-music pioneer John Bischoff, to the Eastern European harmonies and folksongs of the choral group Kitka, to the whistling of Jason Victor Serinus.

Of course, the venue attracts lots of sound artists, people interested in exploring the musical (and anti-musical) properties of sound. But the event is not purely for hipsters. Cahill herself will be performing on a plain piano, and the Del Sol String Quartet will play a selection of pieces from their repertory.

If wandering just isn’t your thing, New Music Bay Area has a lineup posted at gardenofmemory.com, and provide 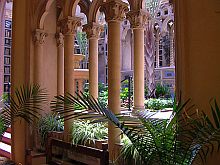 maps at the door for guests who want to find a particular performer. But you should be prepared for getting lost in the large number of beautifully-designed spaces, with their Florentine sculptures, unexpected skylights, and artful plantings. That’s more than half the fun of this event.

Many of the performers at Garden of Memory are “regulars.” One group, the Crank Ensemble, was created especially to play there. As artist arnie Fox describes it, on the group’s Web site).

It may not seem like it at first, but Garden of Memory has proved popular with children of different ages, so if you’re looking for family-friendly events, or if you’re interested in experiencing music in an out-of-the-ordinary environment, mark this event on your calendars.