The Girls in the Band, and All That Jazz 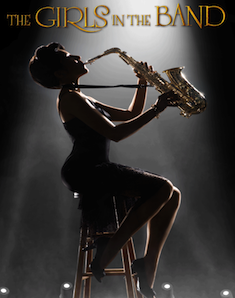 [Editor's note: This film run has been extended through Jan. 30]

The marquee of what was then known as the RKO Golden Gate Theatre, in San Francisco’s Tenderloin, is featured in a still from the 1940s, in director Judy Chaikin’s documentary The Girls in the Band. The name on the marquee is that of the featured act: Ada Leonard & Her Girl Band. The still is followed by historical footage of Leonard, nattily attired and dancing in front of her distaff ensemble, including saxophonist Peggy Gilbert.

It looks like good entertainment, and sounds like good music, in big band jazz style. But elsewhere in the documentary, a nonagenarian Gilbert helps explain why “girl bands” were both a rarity and a refuge. Until the latter part of the 20th century, women “were violinists, harpists, or pianists. But they didn’t have many girls on other instruments.” Trumpeter Clora Bryant sharpens the point: “You put a horn to your lips, or in your mouth, that was it,” she recalls of her own career, contemporary with Gilbert’s. “They wouldn’t call you.”

Unlike the big bands of yesteryear, Chaikin’s film will be able to play three theaters at once this weekend: the Landmark Opera Plaza in San Francisco, the Smith Rafael Film Center in San Rafael, and the Grand Lake Theatre in Oakland. Its story, of the triumph of women instrumentalists over prejudice and their joy in making music, remains timely, inspiring, and fascinating.

As in the best of extended compositions for large ensemble, Chaikin sources from diverse elements and lets them flow smoothly, with a discernible and satisfying arc. The personal stories from an assemblage of elderly former players are compelling and charming. Eighty-eight-year-old saxophonist Roz Cron recalls traveling through the South with the International Sweethearts of Rhythm, who’d originated at the Piney Woods Country Life School in Mississippi and whose members were primarily African-American, though their band name acknowledged their unique racial diversity. As the only White in the group, Cron tears up as she recalls the bravery of Black families who would host the band on tours through the South, where Jim Crow laws forbid integrated accomodations.

The older women’s recollections are interspersed with historical photos and rare footage of their bands, as well as from their childhood experiences in music, which further enhance their biographies. The documentary opens with examination of a photograph which was the subject of its own 1994 documentary. Titled A Great Day In Harlem, the photo purported to showcase the principal players in jazz, assembled in New York in 1958, but significantly there are only two women, Marian McPartland and Mary Lou Williams, who get much longer shrift in Chaikin’s film. McPartland, a veteran pianist and radio host who passed last August, recalls being told, “You play well, for a girl.” Williams, who died in 1981, is lauded by fellow Dr. Billy Taylor (one of the few males to testify) and by biographer Dr. Tammy Kernodle as a multi-talented player and composer who helped launch the careers of several male counterparts.

Chaikin makes artful use of design elements, including three-dimensionalizing some of the old photos (including the Harlem aggregation) and mapping out tours with animation. Documentary footage signals the advent of World War II, which gained female bands a temporary foothold, partly because of the absence of male players on the domestic front and partly because of invitations, particularly from African-American serviceman, to appear with the USO in Europe. Images of celebration of the end of the War auger the end or diminution of the musical careers of many of the women, as they either turned towards domestic life or found that their professional engagements had reverted to their male colleagues.

“Women come to jazz in more of a cooperative concept than a combative concept. They are more into playing together and supporting and playing off each other, which I have always thought was part of the beauties of jazz.”  — Judy Chaikin

A painful indicator or the persistence of gender discrimination is an image of a post-War article from Down Beat, the preeminent jazz periodical, on the subject of “Why Women Musicians Are Inferior.” Stills and footage depict the prototypical role of women as housewives and mothers. But also seen are a young Toshiko Akiyoshi, in native Japanese dress as she performs brilliantly on piano, and saxophonist Vi Redd, about whom Taylor comments, “A lot of people said she was the female Charlie Parker. But she wasn’t the female anything!” She was just a great bop player.

Chaikin moves her story on to the 21st century, where younger women, including bandleader and composer Maria Schneider, have begun to dismiss the need for gender labels. But in an interview, the director voiced an opinion about a vital element added by female musicians. “Women come to jazz in more of a cooperative concept than a combative concept,” she said, “They are more into playing together and supporting and playing off each other, which I have always thought was part of the beauties of jazz.” Her film effectively bears this out.

And in the months since its release, the film has also had an enlightening effect on both its protagonists and its audiences. “I feel it sort of validated the work that I did,” said 88-year-old Roz Cron, speaking from her home in Woodland Hills. She’d helmed several Q&A sessions at screenings, including one at the Monterey Jazz Festival last September. “The film opened up so many eyes for parents,” she testified. “In my opinion, girls and women are getting good educations and making things change.”

Classical music, present early in many of the older jazz musicians’ lives, has undergone parallel changes, Chaikin noted. “I’m sure you’re aware of how blind auditions have changed the landscape there. Rock, though it incorporates a lot more women than either jazz or classical, has still kept women in a kind of a marginal role, looking at them partly for their good looks, though there are a few good hard-hitting women playing.”

Along with upcoming screenings in Chicago and elsewhere, Chaikin hopes to get The Girls in the Band out on cable and streaming on Netflix and Amazon, as well as available on dvd. She’s also developing a curriculum and an expanded version of the film for use in schools and colleges. Is there hope that music may move beyond the strictures of sexism? Perhaps so, when you ponder the name of one of the film’s generous producers: Hugh M. Hefner.