The time has come. After 13 years as music director of the Golden Gate Men’s Chorus (GGMC), Joseph Jennings has announced his retirement. Jennings’ farewell concert, which will showcase his ever-adventuresome choice of repertoire and his penchant for pushing his singers’ limits, comes on the heels of his departure as longtime music director of Chanticleer. 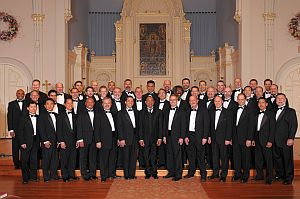 The concert, whose focus is love in its various and diverse manifestations, includes Arnold Schoenberg’s Verbundenheit (Obligation), Dr. Stan Hill’s David and Jonathan (Hill was a longtime director of the San Francisco Gay Men’s Chorus), and what is billed as Jan Sandström’s “hypnotic” work Singing Apes of Khao Yai. The latter is based on the legend of a princess who, having deceived her husband, was transformed into a male gibbon who had no choice but to sing his lament in the forest every morning.

For a change of pace, the concert also includes selections by artists as diverse as Andrew Lloyd Webber, Coldplay, Todd Rundgren, and the Beatles (could it possibly be All You Need Is Love?), plus additional choral works that focus on the subject of love. While I could speculate for days on possible sexual subtexts for Jennings’ choice of repertoire, it would be best to let things rise and fall as they may and simply take in the beauty of the music.

GGMC has come a long way since Dick Kramer, one of the key instigators of the gay choral movement in the U.S., founded it as the Dick Kramer Gay Men’s Chorale in 1982. Kramer envisioned a small men’s-ensemble, on the order of university men’s choruses of the 19th century. Since its reorganization as the Golden Gate Men’s Chorus in 1988, and Jennings’ arrival in 1996, the auditioned chorus of no more than 50 members has broadened its scope. Although it remains a member of the Gay and Lesbian Association of Choruses (GALA), GGMC’s membership is open to both gay and gay-supportive men of diverse ages and racial backgrounds.