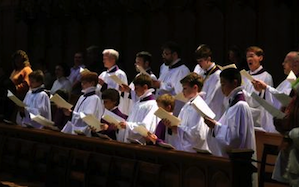 There is a particularly Episcopalian (Anglican) Christmas service sometimes titled “Festival of Lessons and Carols.” It makes you think of an Oxbridge college at end of term, or an English country estate blanketed by snow. In San Francisco, it makes you think of Grace Cathedral, where the Choir of Men and Boys celebrates its 100th anniversary this year. This weekend, you can catch the last performances of the choir in a semi-staged performance of Benjamin Britten’s St. Nicholas cantata, along with the traditional English carols. And then, on Dec. 24, there is the Lessons and Carols, which features hymns and choral music along with readings from Scripture. The place will be packed on Christmas Eve, so arrive well before the 4 p.m. start time.