A Parody for a Gala? Upside Downton Abbey, Of Course 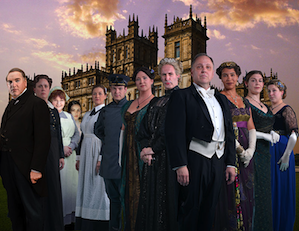 It's afternoon tea time at the English country estate of Lord and Lady Grantham. The household, upstairs and downstairs, savor the brew, not knowing a potion in their bone-china teacups will cause them to fall in love with the first person they see. Who the gender-bending Dowager Countess will snog is anyone's guess.

Welcome to Upside-Downton Abbey, or, The Lass that Loved a Chauffeur, a parody of the Masterpiece Theatre phenomenom Downton Abbey that is this year's gala by the Lamplighters Music Theatre.

The San Francisco-based musical theatre troupe, which specializes in the comic Victorian-era operettas of Sir Arthur Sullivan and his librettist, W.S. Gilbert, has set their spoof mostly to the music of Sir Arthur. The gala's writing team, fans of both the BBC's Downton Abbey and Upstairs, Downstairs, decided they wanted to create something that looked at the master-servant relationship, and the idea of nature versus nurture, explained the show's librettist Jonathan Spencer.

"This is a more straightforward parody than previous productions that were more of a mashup," he said, in a telephone interview.

Upside-Downton Abbey pays homage to the plot of Gilbert and Sullivan's The Sorcerer in which a young man, bent on blurring all class and social distinctions in a small English village, hires a wizard to create a love potion. Drinking it leads villagers to fall in love on sight, creating a comic mismatch of couples. The 1877 Sorcerer was the duo's first opera to feature character types and a range of songs that would appear in their later collaborations, such as a patter song, a contrapuntal double chorus, and a romantic duet for tenor and soprano.

"The idea is that the potion turns the class system upside down," says Spencer, noting the current production also draws from Gilbert and Sullivan's ghost-studded Ruddigore as well as from H.M.S. Pinafore, which pokes fun at the British class system, for a heated discussion between Sir Robert and his American-born wife, Lady Cora.

Spencer crafted the parody's storyline, and joined a team of other Lamplighters to wordsmith its many songs. "Writing the Dowager Countess' pithy one liners into singable lyrics was the hardest thing to write," he said. "We do try to honor Gilbert, and channel him in the writing to keep him in the mix. You can see how well they [Gilbert and Sullivan] worked together."

The topsy-turvy duo's musical theatre oeuvre offers fertile creative ground for spoofs, says Spencer, noting their 13 operas cover the range of emotions and situations. '"They [the operas] lend themselves to parodying. There's a kind of simplicity and spirit to them that's so elemental."

A one-day Jeopardy champion in 2006, Spencer believes there's a connection between his hard-drive of a brain and writing satire. "It also helps to have a healthy knowledge of Gilbert and Sullivan," he says. "I come from a supremely unmusical family but I went to a wonderful school, and every year, first through eighth grade, the school play was always a Gilbert and Sullival operetta. I grew to love it." He credits his Marin Country Day School music teacher, the late Barry Mineah, with sparking his early interest.

If G&S could channel themselves into San Francisco's Palace of Fine Arts Theatre for the November 10 Lamplighter gala, could they, would they appreciate Upside-Downton Abbey? "That's a subject we discuss a lot," says Spencer. "Gilbert parodied himself all the time. I hope that he would think taking Gilbert and Sullivan-style material and applying it to the modern era would be right up their alley."

No doubt, any such discussion would lead to serious tongue wagging back at the Grantham's manor house, both in the drawing room and in the kitchen. "I think the Dowager Countess would say of the spoof 'It's so American,'" suggests Spencer. And the British actress who plays the television show's aristocratic matriarch, also known as Lady Violet? "I don't know what Maggie Smith would think of a guy playing her; maybe she'd say something like 'best of luck.' She's a good sport."

Lady Violet is, of course, the very model of a modern major-general.