Lamplighters Call on Sherlock Holmes and Dr. Who 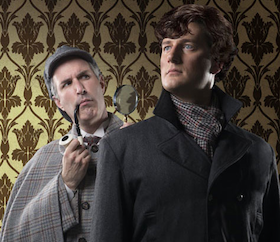 The Lamplighters Music Theatre, founded in 1952, is best known for its Gilbert & Sullivan repertoire, ‘the canon’ as they refer to it. But every year they create a special show for their gala event. Last year they did “Upside Downtown Abbey.” This year the theater presents, “Sherlock Who?,” a mystery-suspense-parody-musical and mash up of two British classics, Sherlock Holmes and Dr. Who.

“If you like to see Gilbert and Sullivan,” the show’s director Eliza Leoni told us the other day, “and if you like Dr. Who and Sherlock Holmes, this is a chance to see all those come together in a very funny way.”

The music is from Gilbert and Sullivan, with lyrics developed by Monroe Kanouse and Baker Peeples. There is a two-piano orchestra and a chorus; the cast includes all well known members of the Lamplighters company.

There will be two performances: November 2nd and 9th. The first, “a fun(d)raiser,” will be at the Palace of Fine Arts in San Francisco; the second will be at the Mountain View Center for the Performing Arts.

The plot opens on the eve of a royal wedding; there’s a commotion because missing is a compromising photo of the groom with a woman, not the bride. Holmes is hired to retrieve the photo so the wedding can go on, but then, through twists and turns, he suddenly finds himself in the future with Dr. Who.

Chris Uzelac plays Sherlock and also wrote the script, with lines and advice from a 15-member committee of ‘parody experts’ in the company. Script writing began last January and took nine months. “It was similar to writing a TV show,” says Leoni, “in which you have a number of people contributing ideas but then one person writes it. That was Chris.”

Highlights of the show include a sidekick’s lament, bemoaning and celebrating the life of a sidekick. A well-known politician inspires the groom, a “tool” of a character, according to Leoni. And Dr. Watson is a woman; Sherlock, for all his powers of deduction, has no clue.