To Make a Searing Opera: Snatch the Fire 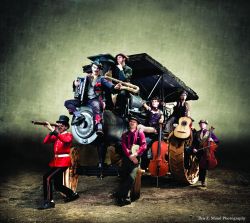 When the 9-year-old Eric Stern saw a production of Kurt Weill and Bertolt Brecht’s Threepenny Opera in his native Philadelphia back in the 1970s, his life changed. Stern loved the darkness, the rawness, the decadent Weimar-era cabaret feel of the music, and the decidedly un-elite characters the opera chronicled. They stuck with him throughout the following years of piano lessons, voice lessons, opera training in Europe, and tenor roles in more than 30 operas (including La Bohème, Gianni Schicchi, Carmen, and the American premiere of Threepenny’s source material: John Gay’s Beggar’s Opera). And when he grew disillusioned with the establishment opera world, with its megabucks productions and elitist, often inaccessible atmosphere, Brecht and Weill’s dark cabaret helped guide Stern in his creation of his own, alternative musical institution — one that would allow him to perform the classical music he loved, and much more besides — in intimate settings that welcomed everyone. That band, Vagabond Opera, which describes itself as a Balkan Arabic klezmer-based, original absurdist cabaret ensemble, plays two Bay Area shows this week.

After returning from his European operatic adventures, Stern wandered, musically and geographically, exploring expressive classic rock (Hendrix and Joplin), Middle Eastern and Eastern European (especially Romanian) sounds, the music of his own Jewish heritage (which included cofounding the Jewish Theater Project in New Mexico and directing a Jewish arts festival), a traveling musical comedy production called Sabotage, jazz, klezmer, Bulgarian accordion, and more. While busking with his accordion up the West Coast and singing opera on street corners, he found a spiritual home in Portland, Oregon, which boasted a nascent alternative classical-music scene, teeming with formally trained musicians who likewise sought ways to create and perform classically influenced music outside stultified institutions. 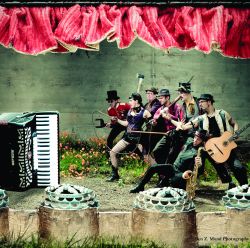 “I remember looking around the audience at a Ziggy Marley concert and thinking, Why does opera have to be in an opera house, someplace that seems inaccessible to so many?” Stern remembers. “Why can’t these people listen to opera in this venue? I wanted to snatch this art and distribute it everywhere.”

To do so, in 2002, he created Vagabond Opera, which allows Stern to perform opera, Yiddish, klezmer and other Jewish and Eastern European music, and much more — but in rock and dance clubs, not concert halls.

“The experience of many musicians of my generation and younger is that we’ve been educated and told to follow this strict style, and we’ve rebelled,” Stern explains. “As someone who left the strict opera world, I didn’t feel there was anything else left in that Western European tradition. We live in a world that’s more connected, and I wanted to put something else in there” besides the standard operatic fare. “We’re like Prometheus,” he says. “We get to snatch the fire and do whatever we want. I imagine this sort of renewal has to happen every few years if an art form is to be viable. Look at [Leonard] Bernstein’s Candide and West Side Story.”

Over the years, VO’s ingredients would come to include Hot Club–style gypsy jazz swing, tango, Turkish belly dance music (with dancers, some equipped with fiery accoutrements), Edith Piaf cabaret chanson, Ukrainian folk-punk ballads, and original creations embracing those styles. He and other band members write and arrange songs in parts, as classical composers would, sometimes modifying classic forms like arias into other guises.

“I’m not sure where classical music ends and something else begins,” Stern says. “I don’t feel constrained by it — that genre offers us useful tools, but we can also use the instruments and techniques in new ways. I have a feeling that these boundaries are more fluid than we realize, so I’m always pushing them.”

Stern’s fellow travelers include a recovering ethnomusicologist/multi-instrumentalist (violin, sax, clarinet, marimba, mbira, didgeridoo, and more), two classically trained improvising and singing cello virtuosos (both also members of the alt-classical Portland Cello Project), a jazz-trained bassist/guitarist/ philosopher, and a Berklee- and Brazil-trained drummer. All play in other ensembles, several have theater backgrounds, and most have recorded or played with dozens of other musicians, including some major stars. With their highly theatrical stage antics (fire dancers in Santa Cruz, a belly dancer at Askenaz) and costumes, VO sometimes seems half chamber ensemble, half cabaret/carny act.

VO caught a retro trend that has seen the rise of other bands with similar Eastern European or cabaret inclinations, like Denver’s Devotchka, and has even attracted fans who have enlisted from the steam punk movement. VO has gradually built a national following, including a National Public Radio feature and opening gigs for fellow Portlanders The Decemberists and Pink Martini. They’ve even played with the Oregon Symphony. Stern has also composed for puppet theater and dance and, last year, wrote an actual opera, Queen of Knives, due for a restaging soon.

The ensemble’s effervescent new album, Sing for Your Lives, which supplies much of the material for its upcoming live shows, is Vagabond Opera’s most assured and cohesive recorded work to date.“In the past, it was ‘let’s shove everything we’ve been working on onstage into the album,’” Stern says. This time, “We wanted to make a coherent album.” The disc includes only original compositions by Stern and other band members, including two songs and vocals by its newest member, cellist/chanteuse Ashia Grzesik, a one-time Cirque du Soleil musician and a Polish immigrant who maintains a flourishing solo career and in concert gives the band a foil for Stern’s operatic tenor. She and another member even contributed the album art.

Nevertheless, this is still one diverse recording, containing a Brazilian and fado-fueled piece, some odd-metered East European dance music, a tango, and more. As ever, the spirit of Weill and Brecht haunts this project, too. But this time, the many elements feel fully assimilated rather than occasionally derivative. “When you’re young, you’re still finding your voice,” Stern says. “I feel like we’ve really found ours now.”