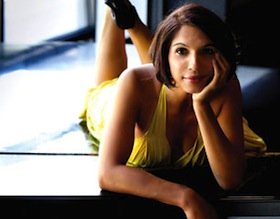 Nov. 12 brings together on the Mondavi Center stage a UC Davis artist in residence, the pianist Lara Downes, with a tribute to one of J.S. Bach’s most beloved solo pieces. Downes is performing her recently recorded 13 Ways of Looking at the Goldberg, a compilation of 13 new takes on Bach’s Goldberg Variations commissioned from a wide range of composers, ranging from 2010 Pulitzer Prize–winner Jennifer Higdon and Bright Sheng to Fred Lehrdahl.

Commissioned by the Gilmore Festival, and premiered in 2004 by new-music pianist Gilbert Kalish, the piece is an exercise in gaining perspective, inspired by a Wallace Stevens’ poem, 13 Ways of Looking at a Blackbird. Both Downes and Festival Director Dan Gustin share the common perspective that, over time, music has a life of its own and that concert artists are privileged to capture, reinterpret, and turn it into something reflective of each generation.

“To me it’s very interesting to see how musical ideas get passed down from generation to generation. I think, as a classical artist who’s going to play music in the concert tradition, the key thing is that this music continues to live and [have] a new life with each generation that interprets it,” said Downes. “You have these contemporary composers that are responding so strongly to Bach’s music and creating new works. Just seeing [this] is uniquely fascinating to me. So I loved the project when I heard about it, and I started playing the pieces [and] playing the pieces, and I just [thought] it would make a really wonderful recording from that perspective, as a project that comments on this iconic work that’s been part of the tradition for 250 years and also brings something new to that work.”

“You have these contemporary composers that are responding so strongly to Bach’s music and creating new works. Just seeing [this] is uniquely fascinating to me.” – Lara Downes

Making music and creating stories is something Downes has had down since she was 4 years old, along with her musician sisters in San Francisco. After performing with the San Francisco Symphony, the S.F. Girls Chorus, and the S.F. Opera Chorus as a child, she moved with her family to Paris, when she was 15. Downes spent a decade abroad, studying at the Hochschule für Musik in Vienna and the Musik Akademie in Basel, Switzerland.

“I really feel like, in my case, it was a question of never deciding not to be a musician. It was a very direct trajectory, not in the sense of a career that was, I want to say, pushed or developed from the outside in any kind of an aggressive way or [that] there were other things that are pulling me more,” said Downes. “I think it [music] has just been the place where all of my interests and curiosity have always been centered. So I feel like it was a very organic path.”

Recorded on Downes’ own label, Tritone, and released in September (see SFCV’s review), 13 Ways brings her back to where it all started when, as a child, her father constantly played Glenn Gould’s famous 1955 Goldberg recording.

“I’m really just loving this project. It’s still feeling very new, so the experience of bringing it to new audiences is just tremendously happy right now,” said Downes. “I’m looking forward to presenting it at Mondavi Center, which is still my home crowd. It’ll be a nice chance to show everyone what I’ve been working on so hard for the past year.”