The Art of Audition at the Young Artists Competition 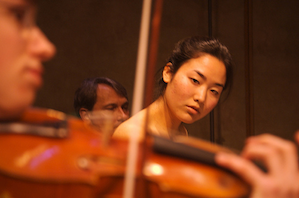 This weekend, the Mondavi Center in Davis hosts its Young Artists Competition (YAC). This is one of the great competitions in the country. There are 21 finalists, ages 11 to 21. From all over the country. To get here, they’ve gone through a labyrinth of performances. Sunday, each performer will have 15 minutes to shine.

The performance starts at 2 p.m. Newly commissioned work for the competition includes a set of piano pieces titled The Rogues Gallery by composer Mohammed Fairouz, which will be required pieces from the piano finalists. Each piece is inspired by one of the villains from the Batman comic series: Mr. Freeze, Scarecrow, Two-Face and The Riddler.

If you’re a musician in high school and you’re thinking about going to the next level, you should go to this and find out what accomplished young musicians your age sound like. That’s a tip but not the tip.

Incidentally, to give you a sense of the kind of musicians this competition attracts, last year’s winner was Daren Jackson, a 21-year-old bass singer from North Carolina. His first audition, in New York, was his first time traveling out of the state. He came onstage and instantly won over the jury.

“He was so charismatic,” says Lara Downes, acclaimed pianist and artist in residence at the Mondavi Center, as well as artistic director of the competition. “His voice just filled the hall. He nailed it in every way and then comes across the country, stands on our stage in front of 1200 people, and without any hesitation, sang a beautiful program.”

Jackson’s audition repertoire included Mephistopheles’ Song of the Golden Calf, from Gounod’s Faust and Ol’ Man River, among others. His prize was $6,000, and recently, he returned to the Mondavi Center to sing the lead role in the West Coast premiere of the children’s opera The Magic Fish, by composer Sunny Knable.

“If I were a young student today and curious about what my peers from all over the country were learning and doing, and what my next steps might be, I would come to this.” -Lara Downes, artistic director, Young Artists Competition

That Jackson finished a circle by returning to the Mondavi Center is extremely important to Downes, who is from the Bay Area and graduated from the San Francisco Conservatory of Music.

“Why? Because for one, these little kids have an experience that will change their lives forever. Here’s a great singer, on the cusp of his career, and he is able to attract a whole new audience. This is exactly how to change the way kids think of classical music.”

Downes’ advice is this: “If I were a young student today and curious about what my peers from all over the country were learning and doing, and what my next steps might be, I would come to this. If only to experience the density of musicians. … And then there’s the value of seeing the final auditions and how people handle pressure.”

Finalists include a 15-year-old boy from Houston, who has to play a concert the night before flying to play at UC Davis. Also, two Chinese-American girls from Cleveland, Tennessee, ages 17 and 18, who were discovered by a faculty member at a local college. “Their families have made huge sacrifices to get them to this point,” says Downes.

All true. But there’s more, and here’s the tip.

On Saturday, pianist John Perry will conduct a master class for the YAC finalists and the public is invited to attend. Perry’s resume is from here to the moon; suffice to say he is a renowned juror at many of the world’s great competitions and his students have been prize winners at the likes of the Rubinstein, the Music Teacher’s National Association competition, the Naumburg National Chopin competition, and on and on.

For pianists who wish to experience what it’s like to learn from someone at the top of their profession, this is a great opportunity. At the Mondavi Center; at 9:30 a.m., Saturday. There is free admission for students under 18 coming with a ticket-paying adult. (More information here.)

Downes, herself, studied with Perry. “It was an awakening moment. And the moment when I realized that now, it’s me, and now I get to do dangerous things.”