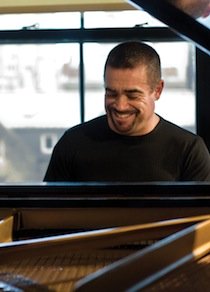 Ask a music fan to name the greatest living American composer, and you’ll probably get a list with names like Reich, Glass, Adams, maybe Carter or Crumb. Chances are, however, that the composer who has arguably enjoyed more critical and popular success than any of them won’t immediately leap to mind. That’s Stephen Sondheim’s penalty for working in musical theater — which used to be the mainstream, the source of jazz and popular successes, and now is marginalized as the province of mere show tunes, as though composers such as Gershwin, Arlen, and Rodgers were somehow lesser figures than, say, Copland, Bernstein, and Cage.

With his new Sondheim project, which he brings to the Music at Meyer Series on March 12, Anthony de Mare has set out to change that. The pianist has long enjoyed a deserved reputation as one of the more formidable new music specialists around, performing and recording works by most of the 20th and 21st century’s leading composers, including an acclaimed disk of the music of Lou Harrison, Henry Cowell, and other West Coast musical mavericks. But he’s always had another side.

And naturally, one of his favorite composers was Stephen Sondheim, the 80-year-old dean of American musical composers who shot to fame as Leonard Bernstein’s lyricist of West Side Story (for which some critics never seem to have forgiven him, deciding that he’s really a lyricist who writes tunes to support the words), and then going on to dominate American musical theater with shows like Sweeney Todd, Sunday in the Park With George, A Funny Thing Happened on the Way to the Forum, Follies, and so many more.

De Mare saw the original run of Sweeney Todd in 1979, and never stopped pursuing productions of Sondheim’s great musical. He began studying the scores in high school, and he’s seen all but a few, most of them several times. A few years ago, de Mare decided that Sondheim’s music deserved the same kind of attention as that of classical composers, whose tunes are often transformed or elaborated on by later musicians. He asked a few of his composer friends, such as Fred Rzewski and Paul Moravec, whether they’d be interested in making new settings of famous Sondheim songs. After signing up a few big names, de Mare broached the idea to Sondheim himself, who liked it. So they compared lists of composers and songs. Sondheim even sent lists of potential donors and commissioners to the project.

De Mare intentionally cast a wide net, seeking composers from the jazz, classical, and theater worlds who “felt an affinity for his music,” he recalls. He was surprised to find enormous enthusiasm for the project, which soon grew to 36 composers — at which point de Mare had to close the piano lid, lest he be overwhelmed with trying to learn so many new arrangements. It turned out that almost every composer he talked to considered Sondheim a genius.

“One of the missions of the project is to show how someone so celebrated as a master lyricist is also a great composer.” – Anthony de Mare

“One of the missions of the project is to show how someone so celebrated as a master lyricist is also a great composer. So many composers in the classical world do see his genius as a composer,” de Mare explains. “That’s why these pieces can be done without the lyrics. Composers have set the pieces to go to the core of the character who’s singing. They really capture the character of what the lyrics are trying to say.”

De Mare also hopes to send the message of Sondheim’s importance to listeners who might otherwise expect to hear music by Beethoven, Chopin, or even Copland. “Another goal is to break through those boundaries with classical audiences,” he says. “Young generations of composers are embracing so many different trends.” Sondheim’s music, and the musical theater world in general, is just another source of inspiration, yet it’s a particularly fertile one.

At a performance of 14 of these pieces last summer in Portland, Oregon, I was struck by how familiar these sturdy tunes sounded, even if I hadn’t seen the shows they came from in years, and how they supported so many diverse approaches. Examples are Reich’s minimalism (similar to his “counterpoint” pieces) in “Finishing the Hat,” Fred Hersch’s jazz balladry on “No One Is Alone,” Kenji Bunch’s wild “The Ballad of Sweeney Todd,” Paul Moravec’s nightmarish ride on “I Think About You,” David Rakowski’s brilliant “The Ladies Who Lunch,” Ricky Ian Gordon’s poignant “Every Day a Little Death,” and Jake Heggie’s flash pyrotechnics in “I’m Excited; No You’re Not.” For his Meyer performance, de Mare will chose a dozen so works from among those and others completed by Mason Bates, William Bolcom, Eve Beglarian, Michael Daughtery, Broadway’s Adam Guettel, even the Bad Plus’ Ethan Iverson, and more of today’s finest composers. Isn’t it rich?