Music in the Vineyards Owes Success to Its Faithful Audience

Music in the Vineyards 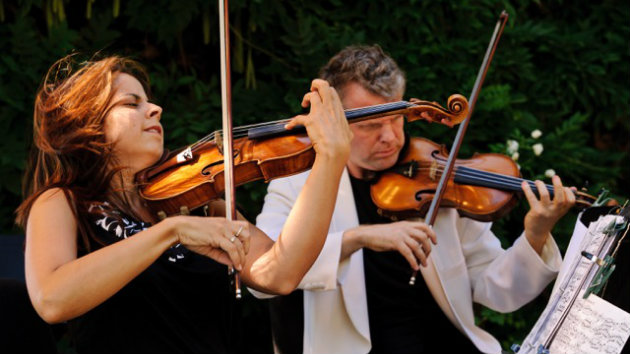 Music in the Vineyards, now in its 21st season, has become one of the most successful local classical music festivals. With another 10 days to go, nearly all the performances are sold out.  And you wonder how that’s possible at a time when audiences often seem so fickle and in such short supply.

The festival is lead by Michael Adams, a violist with the Minnesota Orchestra, and his wife Daria, a violinist with the St. Paul Chamber Orchestra.  Festival events are played at many of the local wineries in the Napa Valley, with seating ranging from 80 to 150. The theme this year is the music of Franz Schubert.

“Every year,” Adams told us the other day, “we’re in the black and we keep growing. We’ve been careful not to foster too many grandiose ideas about what the festival might become. The focus has been on being solvent.”

“And when it comes to programming our motto has always been, ‘know thy audience.’ We’ve gotten to know that the audience here is not terribly interested in contemporary music. They prefer a more meat and potatoes repertoire. And that’s what we’ve attempted to provide. We’ve also realized that we have a lot of repeat concert-goers and many are local. We once did some data mining and found that 80 percent of our audience were comprised of a core of 200 families in the valley.”

Adams added, “You can look back at Mozart’s day when audiences always expected to hear something new, and weren’t expecting to hear a piece twice in a lifetime, whereas today the opposite is true. People want the comfortable and the familiar; they don’t want to take the risk of spending $50 on a program that’s not in their wheelhouse. As a result, presenters of string quartets and the like don’t want to take those risks either, so they program on the safe side.

“We try to introduce an unknown element in most concerts, an unknown work or a little-known composer, but we do it very carefully, using musical airbags around these works. And now audiences trust us a lot. No matter what we program, they’ll probably like it or at least be glad they heard it.” “And when it comes to programming our motto has always been, ‘know thy audience.’ We’ve gotten to know that the audience here is not terribly interested in contemporary music.” — Michael Adams

One other reason for the festival’s success is Adams’ approach to audience engagement.  His pre-concert talks have become a signature of the festival: “I do all the program notes from the stage, and then take a sliver of an idea and blow it up into a 30-minute talk.”

Earlier this summer he gave a talk on the effect of competitions on musicians, and specifically how they can hinder a career, “particularly if one is saddled with the reputation of always being second” The talks often lead to discussions with audience members; and from time to time include interviews with musicians about to play.

In sum, Adams told us, “ trust is the one commodity that’s extremely important in understanding the relationship between Daria and myself and our audience.”

Last Concerts at the Festival

The last concert of this year’s festival on Sunday, August 23, is sold out; although there is a wait list. Still, there are a handful of concerts in the meantime, particularly ones coming up this weekend and the following week.

On Saturday, August 15 at 5:00 p.m., in the Inglenook winery in Rutherford, the program includes Schubert’s Sonatina No. 1 for violin and piano; Gabriel Fauré’s Piano Quartet; and Mikhail Glinka’s Grand Sextet for piano, string quartet and bass.

On Sunday evening there will be two concerts going on simultaneously. At 5:30 p.m., a concert at the Whitehall Lane Vineyards in St. Helena will feature John Dowland’s  Lachrimae;   Pavanes; Schubert’s String Trio in B-flat Major; Bach’s Five Fugues (arr. Mozart) for String Quartet; and Mozart’s Quintet for strings in C, K. 515.

The same evening, at the Napa Valley Museum in Yountville, the program includes Shostakovich’s Prelude, Gavotte and Waltz for two violins and piano; Schubert’s Fantasy for piano 4-hands, D. 940; Paul Juon’s Suite for piano trio; and Mendelssohn’s Piano Trio no. 1.

On Wednesday, August 19, the Pacifica Quartet will play at the Markham Vineyards in St. Helena. A pre-concert talk by Adams will begin at 6:30 p.m. followed by the concert at 7:30 p.m. The Pacifica Quartet, based on Bloomington, Indiana, first took the stage in 1994 and won a Grammy in 2009 for best Best Chamber Music Performance. They are a festival favorite year after year. The program includes, Giacomo Puccini’s Chrysanthemums; Shulamit Ran’s Glitter, Doom, Shards, Memory; Astor Piazzolla’s Four for Tango; and Mendelssohn’s Quartet in F minor, Op. 80.