NCCO and the Rock Star of the Double Bass 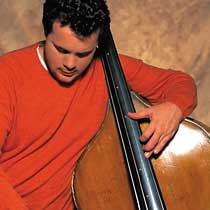 There are musicians, there are virtuosos, and then there is that special class of transcendent musician for whom only superlative adjectives suffice. The double bass player Edgar Meyer is just such a performer, hailed as “the best bassist alive” (San Diego Magazine) and “the most remarkable virtuoso in the relatively unchronicled history of his instrument” (The New Yorker), whose playing has been described as “defying the laws of speed and distance” (blog.oregonlive.com).

Audiences can hear this force of nature in performances with the New Century Chamber Orchestra Sept. 23-26 (plus an open rehearsal on Sept. 20), as he tackles Giovanni Bottesini’s daunting Concerto for String Bass No. 2 in B Minor alongside works of Rossini, Shostakovich, and Mahler.

Meyer boasts a breadth and depth of achievement that Buckminster Fuller might envy. His accolades include the Avery Fisher Career Grant (the first bassist ever to be so honored), a MacArthur Fellowship, and three Grammy Awards. As a composer he’s written a violin concerto for Hilary Hahn, plus double bass concertos, a bass/cello double concerto, and a string quintet. His recordings span a startlingly diverse range of genres, collaborators, and instrumentation; a self-titled release from 2006, for instance, finds him playing not just double bass but also piano, guitar, banjo, viola da gamba, mandolin, and dobro (a specialized resonator guitar). 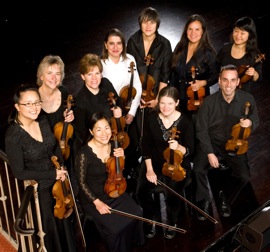 NCCO seems impressed with its latest guest artist. “In the mid-1800s, the Paganini of the double bass was Giovanni Bottesini. Today, without question, it’s Edgar Meyer. ... There is simply no one like him. As a performer, he is unrivaled,” says Music Director Nadja Salerno-Sonnenberg in a video concert preview on the ensemble’s Web site.

So far, so good. But still a nagging doubt lingers — how effective can the double bass be as a solo instrument? None of the big-name composers wrote concertos for it (except Haydn, though his work is now lost), and generally it has been “too often overlooked, and hardly ever considered an instrument of virtuosity,” according to Salerno-Sonnenberg. The Bottesini concerto should put such worries to rest. This is a true showpiece, blending fiendishly difficult passages with folklike dance idioms and moments of operatic lyricism, a vestige of Bottesini’s own penchant for opera.

Bottesini was a 19th-century double bass rock star, a dazzling virtuoso who also composed dozens of concertos, fantasias, and other works for the instrument. Meyer is clearly cut from the same cloth, and his own compositions for the instrument are worthy efforts, according to Salerno-Sonnenberg, who requested that Meyer perform his own music when she first brought him on board. “As a composer, he has created an inventive and unique place in the musical world,” she observes. “Though they are centuries apart, Giovanni Bottesini and Edgar Meyer follow similar paths in that they both contribute not only by the example of their playing, but by significantly adding to the repertoire for the instrument, both in numbers of works and in their level of virtuosity.”

With a superstar guest artist, its own roster of outstanding performers, and a program of music both familiar and obscure, NCCO’s season opener should be an exciting affair. Salerno-Sonnenberg’s parting shot on her video promo fittingly partakes of the same superlatives that always seem to follow Meyer: “Edgar Meyer’s performances with the New Century Chamber Orchestra will be an event you will never forget.”