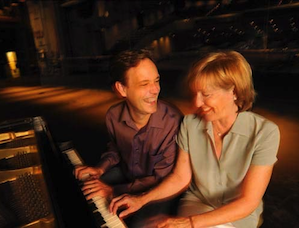 Jake Heggie was new to the neighborhood and not yet a world-famous composer when he discovered the Noe Valley Chamber Music (NVCM) series, in a church hall a few blocks from his Castro Street home.

“I thought, wow, San Francisco is amazing!,” Heggie recalls with a laugh. “The focus was really on the music and the performances themselves. It felt great to be there with neighbors and people who just happened to find out about the series, and it was also a way of connecting in the neighborhood. Music has a way of uniting people like nothing else does.”

Back then in the ’90s, Heggie was holding onto his day job, handling press relations for the San Francisco Opera. But he was free to attend Sunday afternoon NVCM concerts, and was soon showcasing his own original compositions in the series. Next week, Heggie’s set of songs From the Book of Nightmares will receive its premiere performance as part of NVCM’s 20th Anniversary Gala.

“Other things come and go, but 20 years of a chamber music series!,” enthuses Heggie, who still lives close by, on 21st Street. “People do that because they really care. They’re creative and they’re innovative about how they do it. And those are all things that I really admire, and that are essential to the survival of the art form. Not only to celebrate classics, but also to infuse new work into it and to recognize the great players that we have right here.”

When NVCM founder and Board President Karen Heather was seeking a location to preview the May 19th Gala, to fete the series’ donors, and to seek new supporters, she consulted Heggie, who suggested contacting Gordon Getty, his friend and fellow composer. Getty’s work The Going From the World We Know, a setting of an Emily Dickinson poem arranged by Luna Woolf, was set to be one of the other contemporary highlights of the Gala program. Ann and Gordon Getty agreed to host the May 1st NVCM preview at their elegant and ample Pacific Heights homestead, where Heather and series Executive Director Tiffany Loewenberg made presentations and Heggie, cellist Emil Miland, and soprano Ann Moss were among the performing musicians. “Our Gala will include a silent auction, and hopefully a lot of people that were at the Getty event will come,” says Heather. “The price of admission to that event included tickets to the Gala.”

“Music has a way of uniting people like nothing else does.” –Jake Heggie

When she first envisioned a chamber music series in 1992, Heather had been working for over a decade in the front office of the Noe Valley Ministry, based in a clapboard Presbyterian church on Sanchez Street, just off the neighborhood’s main drag. Aside from a sanctuary for ecumenical services offered by the Reverend Carl Smith, the Ministry had been serving as a community hall for meetings, workshops, and little-theater productions, as well as a care facility for toddlers and elders, a jazz and pop series venue, and the offices of the Noe Valley Voice newspaper. “I’m a pianist, classically trained, and I was a member of the Miraloma Piano Trio,” says Heather. “So I talked to musicians who were coaches for my group, like [pianist] Robert Sutherland and [cellist] Emil Miland. They were all very excited about a classical music series in Noe Valley, and they liked the idea of having musicians talk about the music and of being able to try things out in an informal place.”

The series began modestly in March 1992, with Heather’s “coaches” among the featured musicians. In its third season, NVCM secured a grant from Chamber Music America that funded the residence of the Artaria String Quartet, but Heather, who’d resigned her office job at the Ministry, realized that artist management “took up too much of our time and focus.” She turned toward evolving the series’ programming.

“Two things happened: Our audience became willing to take a chance [with contemporary works], and composers became more interested in appealing to an audience.” –Karen Heather

“At first, we were very careful to do Baroque, Renaissance, and traditional classic, maybe up to 1975,” Heather recounts. “Then we really began to include more contemporary music, and to have the musicians talk about what the composers had in mind. Then two things happened: Our audience became willing to take a chance [with contemporary works], and composers became more interested in appealing to an audience. It wasn’t like contemporary music in the ’50s and ’60s, which was bloop-blop-bleep, and people would go, ‘What’s that?’”

NVCM accordingly initiated a commissioning program, which tapped such composers as David Carlson and Cynthia Cox, and secured financial guidance from Nancy Quinn & Associates, “who were just wonderful and helped us get our 501(c)(3) [nonprofit tax status] and establish a board.” The series attracted funding from several foundations, spawning several series within the series. “Osher Inside Out was to encourage engagement with the audience,” Heather explains. “The musicians needed to be willing to engage the audience, in preconcert or postconcert talks, or in the middle of the performance, to really tell what’s going on and about themselves. Our Neo at Noe series was only for very contemporary music, almost wet ink.

“One of the reasons it was so easy to schedule the best musicians in the Bay Area was that once they performed there and experienced the acoustics, they always wanted to come back,” Heather continues. To provide additional incentive, NVCM launched a campaign in 2000 to acquire a better piano, with encouragement from San Francisco Symphony pianist Robin Sutherland and piano technician Larry Newhouse. The new Steinway B was celebrated in June of that year by Sutherland’s performance of Bach’s Goldberg Variations, and the purchase was underwritten by a check from Phyllis Wattis. “It’s always easy to fund-raise for something tangible,” Heather comments.

“NVCM brings chamber music into the routine of everyday living, so that it’s part of the fabric of different lives.” –Jake Heggie

Heggie remained a participant, as well as an attendee. “I did fund-raising things for them, and some recitals,” he says. “I did one that had a lot of the cast of Beach Blanket Babylon involved, doing musical theater stuff, and one to celebrate Poulenc. I liked doing chamber music in a multipurpose venue. It took me back go my childhood in Ohio, when the gym at the school was used for everything: You’d have a scout meeting or a community dinner or benefit, and suddenly there was a concert! [NVCM] brings chamber music into the routine of everyday living, so that it’s part of the fabric of different lives.”

In 2010, the series was forced to temporarily abandon its home neighborhood while the Ministry building readied for renovations, which are still in process. “We went to Holy Innocence on Fair Oaks Street, because the acoustics were also very good there, but we outgrew them, and the piano was horrible,” says Karen. “Then we checked out St. Mark’s Lutheran [in the Cathedral Hill neighborhood], and it was incredible” — and it continues to function as NVCM’s home-away-from-home.

For Heggie, participation in this year’s Gala was an easy choice. St. Mark’s “felt like the right venue, and the 20th anniversary season the right time, to do a world premiere” of his setting of the poems of Galway Kinnell in From the Book of Nightmares, he says. So far, these songs have been heard only on a recording by Lisa Delan, released last month by PentaTone Music. Heggie got Delan to be part of the Gala program, and describes how he helped assemble the rest.

“Flicka [Frederica von Stade], who is a Bay Area resident and a longtime friend and collaborator, agreed to be the featured artist” at the Gala, performing songs by Heggie himself and Ned Rorem, as well as a garland of show tunes, Heggie comments. “And then Bill Burden, who I think is one of the great American tenors — he’s going to be in Mary Magdalene [by Mark Adamo, at the San Francisco Opera], so I knew he was going to be in town, and he agreed to be part of the Gala, too.” These singers will be joined by baritone Christiaan Smith-Kotlarek. Heggie will provide piano accompaniment, with Dawn Harms on violin and Emil Miland on cello.

Between now and its silver anniversary in 2017, NVCM will continue its Emerging Artists program, which has already helped launch the careers of such young performers as dramatic soprano Heidi Melton and Naumburg-winning cellist David Requiro. “We’ve just expanded our board,” announces Heather, “and I think we’re right on the verge of moving up, to have wider acknowledgment of what we do, to have more people come in and listen to our concerts. I think we’ll go back to [the Noe Valley Ministry]; it’s pretty tricky to have to change your name. And I think we want to stay true to our mission of showcasing local talent, which does not mean lowering our standards, by any means. And we’ll have musicians keep talking about what they do; it demystifies the chamber music experience.”

When Tiffany Loewenberg came on as the series’ executive director three years ago, she brought her three young children, along with an inspiration for the series to provide child care during its Sunday afternoon concerts. “That’s helped, because now we’re getting more parents, the under-40 crowd,” reports Heather. “I think chamber music is more of a new thing for people in that generation. Maybe it’s something you sort of have to grow into.”