Holidays Hop to The Velveteen Rabbit at ODC Dance 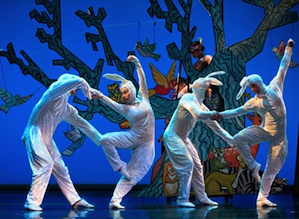 Starting Nov. 29 through Dec. 15, at the Yerba Buena Center for the Arts: The ODC Dance Company presents The Velveteen Rabbit (a tale of love, loyalty and hope).

Along with the various seasonal Nutcracker performances, this is a Bay Area holiday staple, although one could argue that The Velveteen Rabbit (or how toys become real) is the more transcendent of the two, if only because it captures, in sometimes a moody way, all the life passages in a family. The story is from Margery Williams’ children’s novel, written in 1922, about a toy rabbit hoping to become real through the love of a little boy.

We spoke to ODC founder Brenda Way, who is directing this year’s performance. She explained that the project fell into her lap when KT Nelson, the long time director of the annual ODC performance, decided to go on sabbatical. For nearly 30 years Way has been in the audience and has acquired “lots of thoughts about more intensely directing the dramaturgy.”

She went on to explain: “Katie and I are both parents and I have a different experience of parenthood than she does. I had a very ‘poetic’ son; she has a completely active son, so I tried to expand the dimensions of the boy, to include a little more reflection, a little less energy.

That’s really the only liberty I’ve taken — the interpretation of who is this boy. What is the dramatic trajectory from beginning to end? How does he grow from one year to the other? What does that look like in the body?”

“I also wanted to emphasize the beautiful dancing in the performance. Naturally, if you have four things going on at once on stage it’s sometimes hard to get the power of just one thing. So there are times in this when I’m reducing the amount of activity so that your eye knows where to go. The opening scene is one example. We’ll see how much difference it makes.”

“I hear this every year: ‘I used to take my kids, now I come by myself.’” -Brenda Way, founder ODC Dance Company

Way added that she has shortened the production by about 10 minutes, partly by cutting out some of the transition scenes. The performance lasts just over an hour. “This is also a difficult production for the dancers, so shortening it just a little is an added benefit for them.”

Way has four children and she says they inspire much of her work, not just this. She wrote and choreographed a dance piece titled Investigating Grace (2006) when one of her children had a brain tumor. “I thought I was going to lose him but I did not.” She also did a piece called Niobe’s Dream (1975) about the confusion of adults in a child’s world.

“I’m interested in work with emotional tenor, and of course nothing could be more poignant than the relationship you have with your children.”

As for The Velveteen Rabbit, and what makes the story so powerful, she said, “It has this wonderful philosophic theme of aging and what loyalty means. That’s really the message in the piece. I hear this every year: ‘I used to take my kids, now I come by myself.’ The other thing I hear is, ‘I saw this as a child now I'm bringing my own children.’ And interestingly, their relationship to the piece is aligned with the message in the piece: What is loyalty, and what matters as we age? Tradition, affection ….” The Velveteen Rabbit