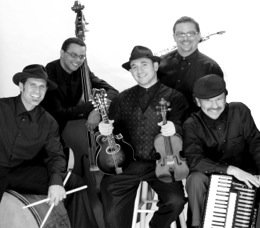 At a recent bar mitzvah in New York City, I found myself with a difficult choice: eating a plate of pickled herring in cream sauce from Barney Greengrass or dancing to the klezmer music. A friend was puzzled about why I could not do both; she obviously had never had that much vinegar in her stomach before. I chose the fish, and left the party feeling a little regretful — until now. It turns out the Bay Area has a legit klezmer band of its own. But it doesn’t just play traditional tunes, instead crossing over with jazz and even pop to create a new breed of world music. Wattup, Brooklyn?!

On Dec. 4, “Klezmania!” will celebrate the holidays and Chanukah at the Old First Church with traditional klezmer, Yiddish and Israeli folk songs, along with original klezmer compositions. Established in 1989, the group began with a discovery of heritage. “I’m Jewish, and I grew up in the suburbs of the [San Francisco] peninsula,” says Ben Brussells, founder, violinist, vocalist, mandolin player, and resident composer. “My mom had an old album of Dave Tarras, the famous New York clarinetist, who did this album called Freilach. I remember that in high school, we had International Night, and I played this album for the kids. We did the ‘Grapevine,’ which is this Israeli dance, and I just thought, wow, this was high energy, and I liked it. I felt a great deal of pride in learning the music.”

Klezmer is Jewish party music out of Russia, Germany, and Eastern Europe (where Brussells’ family is from). And was the decision to pair klezmer with jazz based on their similarly organic beginnings? Not quite; “In jazz music, there’s this openness, and the idea that you can compose on stage. Traditionally, klezmer, especially klezmer violin and clarinet, emulates the sound of the cantor’s voice. On the violin, I can emulate that vocal sound,” says Brussells. However, he laments, “The clarinet can do an even better job [following the voice], but I rarely use clarinet in my group; it’s really hard to find a good jazz clarinetist.” Did that sound like a challenge? (It certainly did to me.)

Despite (or because of) its many incarnations, klezmer has enjoyed consistently broad, but fleeting, appeal. Brussells fondly remembers the earlier days of “Klezmania!”: “In the ’90s, we would take a Middle Eastern tune over a chord progression, and it drew a lot of Deadheads and hippie types.” Even among the band’s Jewish audience today, some dance to the klezmer, while others choose to wait for the Israeli songs. There is no reason, though, why klezmer cannot enjoy the same staying power as, say, Irish folk, another previously obscure genre of world music. Its energy also entices people to dance, and while Brussells would love to have a clarinet in the band, the sax is actually much better suited to his objectives — it gives the music a sexy sound. Where French folk music played on the accordion charms with its romantic sophistication, klezmer with sax has an urban irony, and not just because it will be played in a Christian church. “Klezmania!”’s usual habitat is the raucous Jewish celebration, so a change in setting shouldn’t alter that. Was that a dare? (What do you think?)