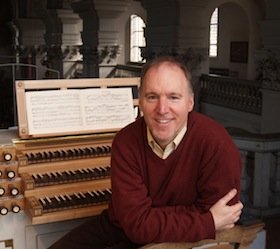 On Dec. 26, in St. Ignatius Church in San Francisco, the world-renowned organist Jonathan Dimmock will play just one piece: Olivier Messiaen’s La Nativité du Seigneur (The birth of our Lord). The free concert starts at 9 p.m., about 50 minutes later he will reach the last of nine sections.

This section is called “God Among Us,” and as he begins his journey through those last eight pages, you will be, wherever you are in the audience, perhaps lured into a state of introspection or meditation. Dimmock, meanwhile, will be on a high wire trying to balance himself, fearing that he may so lose himself, be so taken over by what he is creating — or, as he believes, channeling — that he will lose control of the music.

“I suppose it’s not unlike a near-death experience,” he said recently — “a little disconcerting and scary. You want to give yourself over to the music, but at the same time you want to save something in order to go on. You need one foot on the ground.”

Dimmock was the first American to hold the prestigious position of Organ Scholar of Westminster Abbey. He has served at various cathedrals, including St. John the Divine in Manhattan and St. Mark’s in Minneapolis. Since moving to California, he has been the organist of St. Ignatius Church in San Francisco, the Lafayette-Orinda Presbyterian Church, and Congregation Sherith Israel. He has also been the organist for the San Francisco Symphony, where he participated in the Grammy Award–winning CD recording of Mahler’s Eighth Symphony, voted the classical album of the year for 2009.

His interest in Olivier Messiaen’s music began during college at Oberlin, where, in 1978, he met the composer.

Messiaen wrote La Nativité du Seigneur in 1935 — after entering the Paris Conservatoire in 1919, at age 11, and before he was imprisoned in 1940, in a Nazi POW camp where he wrote one of his signature pieces, Quatour pour la Fin du temps (Quartet for the end of time).

Messiaen is known for his fascination with birdsong, as well as what has become known as synesthesia, a sensation that Messiaen said allowed him to not actually see color but to “experience” it while he heard (or imagined) music.

“Here’s my take on that,” says Dimmock. “When you’re in the loft in Trinity Church in Paris, where he wrote and played this music, the organ is quite high up, and as you’re facing forward you realize you’re on the same level as the stained glass windows a couple hundred feet away. The window glass is in primary colors. It’s quite extraordinary. And so in February, when the sun sits on the horizon for a long time, the light comes pouring in through the glass across one side of the church, landing on those white walls, and perhaps as he was at the organ looking at the collage of color he had this particular connection with color.”

Messiaen’s interest is in showing this second for all eternity. Time stands still. This is his trademark.

Dimmock is attracted to several aspects of Messiaen’s music, not least how it denies the Western conventions of “forward motion.”

“In Western melodies,” he remarks, “you have a beginning, middle, and end; and you always know where the music is going. The ear expects a climax, and then you come back to home base. That’s forward motion. You start in a home key and venture a ways out. Messiaen doesn’t do that. It’s as if you took a snapshot of a runner in midair; logically, the eye wants the runner to hit the ground. But Messiaen’s interest is in showing this second for all eternity. Time stands still. This is his trademark.”

The final section of “God Among Us” ends in a coda, and for Dimmock, an Episcopalian, this is as ecstatic and spiritually meaningful as any music he has ever played. “By the time I get to the end, to those last chords, I am moving out of my body, my skin can’t hold the dimensions of the music, it’s as if my fingers are exploding. It’s then that I feel like a channel rather than a performer. I realize it’s not about me. The whole thing is a cosmic blessing.”