Flying in the face of skeptics, believers are everywhere.

Whether it’s religious, spiritual, or a secular conviction that music soothes souls and connects communities through a universal language of acceptance or faith that a person is kept safe by science when flying in a metal tube 32,000 feet in the air, people believe in things unseen, but knowable. Even agnostics have their belief that neither faith nor disbelief in God is consequential.

More than anything, life’s hard knocks and high happiness cause us to believe that love and loss are next-door neighbors, even bedfellows. Holding onto a belief in something larger than ourselves helps us to share the love and get through the loss.

These and other timeless truths are at the heart of Opera Parallèle’s production of English composer Jonathan Dove’s 1998 cynical comedy, Flight. Featuring a libretto by April de Angelis and conducted by OP Artistic Director Nicole Paiement, the three-act opera inspired by the real life story of the forced 17-year residence of Iranian refugee Mehran Karimi Nasseri at Charles de Gaulle airport will be given three performances February 10-12 at YBCA Theater in San Francisco.

Countertenor Tai Oney plays the role of the refugee who is caught in the grip of incomplete immigration and encircled by a broad swath of humanity in the form of fellow travelers: flight attendants, a couple on vacation, a diplomat from Minsk and his very pregnant wife. In an interview Oney says the role perfectly suits him and “sits right in the middle” of his vocal range, but the challenges of a demanding score remain.

“Rhythmically, it’s changing a lot so it’s rigorous. The jazzy tunes and intervals — if you don’t sing them correctly — it makes everything sound off. It has to sing itself, but it’s challenging to make it sound easy.”

Flight’s architecturally robust score, like other contemporary operas, frequently changes meter. The frequent pivots from 7/8 to 11/8 to another compound meter create a blueprint that conveys an approaching storm, travelers’ anxiety, and more. Paiement says that in part because the libretto is not over-written, Flight is like a good building. “The walls have to be in the right place and proportioned to create a beautiful whole. When we need a climax, the big pillars are there in the right place. Other operas have too much words and lack confidence that music can continue to tell the story.”

Because an opera demands acting chops as well as vocal skills, Oney is ever-aware of the emotional content and works hard to keep it in check. “Being trapped, feeling like there’s no humanity — in these present times it’s hard not to get choked up and let that go into the voice. For me to be a black man in America, to see we’ve come a long way but still have far to go, once you make it personal, it’s difficult to get out of that space. I feel like I want to cry what I call that ‘ugly cry,’ but I can’t, because that’s selfish on my part. I have to serve the music and the audience.”

Paiement says Oney is versatile and a natural actor who moves well on the stage. “He is singing with his whole body.” His voice, which she describes as “wide in the variety of colors” is perhaps key to capturing the opera’s multihued tone --- jolly to poignant to conversational to poetic, but always returns to the touchpoint of comedy. “In general, in opera we sing drama, people dying,” she says. “Comedy is a wonderful way to explore new ways of communicating. You have to be careful not to become campy. It’s very much about looking at ourselves. Laughing and crying are very close and both need to be explored.”

Fortunately, the moment most likely to cause Oney to shed real tears isn’t a moment when he is singing. “There’s a moment when a character says, ‘Who’s bag is this?’” says Oney. “The Minks woman says, ‘It’s mine,’ and realizes her life is changed forever. I feel that for my character too, he’s having to accept that this is his life, in this terminal. It’s a moment where I think about this nation and the election. This is how it’s going to be. It’s not how it should be, but we have to take ownership of it. Not accept it, but move on to have a better, new life.”

For Oney, who was raised in Glen Haven, Florida, and sang with his parents in a “very charismatic Pentecostal” church and subsequently as part of his family’s in-demand “like the von Trapp” group for various churches and organizations, belief in the power and purity of music was inborn. “My earliest memory was at age 4, the first time I sang a solo. My dad wrote an arrangement of Amazing Grace. My career started right then to veer toward solo songs because people started requesting that I come. I had a pretty good ear. If someone was flat or singing the wrong note, I’d just stare at them during a concert. I knew how music operated at that age. It was always there.” 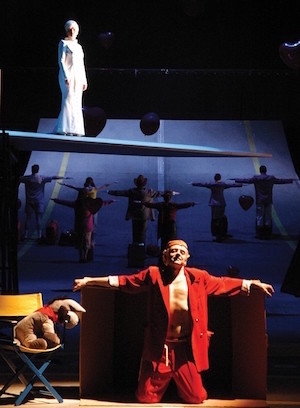 But the empathy for characters and the development and deep understanding of his voice required the usual training and hard work. Oney holds degrees from Stetson University, Boston University, and the New England Conservatory of Music. A year-long practice of yoga has just recently brought revelation about breath control and more color and size to his vocal delivery. “It isn’t as complicated as it seems. You’re breathing to soften parts of your body, to ease the strain. While I’m onstage, to be open, key to any artist, and being vulnerable to your audience — it’s starting to make more sense. At age 32, it’s about not just physically, but mentally being open to show the character to the audience.”

Oney vocalizes every day. “Any time we go onstage we may not be 100 percent. I vocalize in a way that accepts where I am on that day.” The discipline of listening to his inner reality doesn’t preclude interruptive thoughts about the future. He’d like to fuse his classical voice with R&B and record a CD, or use the gift he’s been given to teach master classes, or hold talks with students in underserved schools and communities. “It’s in my heart to do it,” he says.

Oney’s career urges could be called a quest for relevance, a topic Paiement says is foremost for Opera Parallèle. “Opera needs to be aware of changing community and embrace it. It has done that already, if you look at Baroque opera and where we are today.” By focusing on high-quality art making and well-constructed productions that are not constrained by contemporary politics, personal choice, and popularity, Paiement says new and traditional operas will continue to find audiences. “Onstage [in Flight], this goes to the universal subject of acceptance. All of the characters have been abandoned in some ways. It’s a study of belonging, search for love, belief in greater subjects. We appeal to that. It’s not about making something cool, it’s about making something honest to the work.”

In other words, it’s about making believable art.