Opera San José, which closed out its 2008-2009 season with Bizet's Carmen, opens the 2009 fall season with another operatic bad girl: Manon. Jules Massenet’s 1884 opera opens Sept. 12 at the California Theatre.

The sociopolitical milieu of Manon’s 18th-century France lies, of course, a considerable distance from Carmen’s Seville. Still, the two title characters have much in common. Carmen, based on Prosper Merimee’s novella of the same name, and Manon, inspired by Abbé Prevost’s 1731 novel L’Histoire du Chevalier Des Grieux et de Manon Lescaut, are among opera’s most complex and charismatic doomed heroines.

Manon, however, takes a decidedly longer fall. She starts Massenet’s 1884 opera as a shy 15-year-old on her way to the convent; a chance 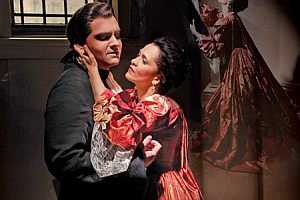 meeting with the young chevalier Des Grieux directs her to an entirely different path. Manon is pure at heart, but deeply flawed — fickle and shallow, with a penchant for making unfortunate choices — and her devotion to Des Grieux, pitted against her taste for the glittering Parisian high life, leads her to a tragic end.

If Manon is unable to escape her inevitable outcome, she makes her descent on a torrent of glorious music. Massenet wasn’t the only composer to respond to Prevost’s original story (Puccini’s Manon Lescaut derived from it, as well, with less satisfying results), but in Manon, with a fine libretto by Henri Meilhac and Philippe Gille, he brought the character to life in vibrant musical terms. With arias such as the Act 2 “Adieu, notre petit table” (Farewell, our little table) illuminating Manon’s inner thoughts with exquisite tenderness, Manon is Massenet’s most enduring opera; along with Carmen and Gounod’s Faust, it remains one of the most beloved works in the French repertoire.

No wonder so many sopranos have been drawn to the role, which has seen great interpreters, including Beverly Sills (who described it as “the French Isolde”), Reri Grist, and Victoria de los Angeles. In recent years, top names such as Renée Fleming, Angela Gheorghiu, and Natalie Dessay have made their marks, as well.