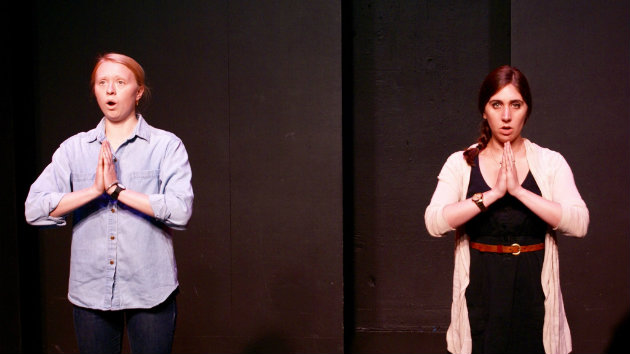 The ghost drew closer and to closer to the little boy, hands splayed as if to strangle him.  “Miles,” he sang in skin-crawling melismas, spinning his captive around as if on an invisible thread.

Not once did the ghost of the dead valet Peter Quint (Nicholas Harmantzis) make physical contact with little Miles (Maggie Manire) in this Opera Theater Unlimited rehearsal of Benjamin Britten’s chamber opera The Turn of the Screw.  But the connection between the two characters delivered an immediate visceral jolt.  Every vocal quaver, predatory gesture, and stricken look took direct aim at an observer sitting five feet away.

“The Turn of the Screw is an intimate, isolated story,” said Young on a rehearsal break at the fittingly pint-sized Center for New Music, tucked into a Tenderloin store-front on Taylor Street. “It’s really about isolation, which I think can thrive especially well in a small setting.”

Arguing that opera is intrinsically “magnified,” Young believes that the micro-focus of a black box production can yield a powerful synergy, stripped of what she calls grand opera’s customary “pomp and flash.” Instead of pitching their performances to reach the distant balconies of a cavernous opera house, singers can concentrate on more nuanced aspects, both musical and dramatic, of the piece.

The audience’s proximity to the action reinforces the sense of intimacy and exposure.  Nothing is hidden. All, ideally, is revealed in the live performance analog of a close-up. 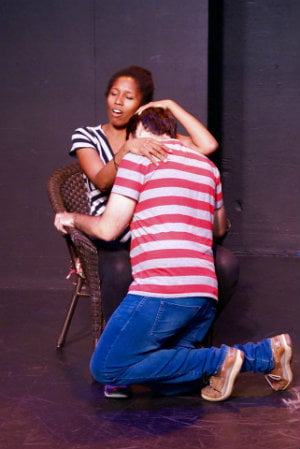 The treatment of the ghosts is a prominent case in point. Without the wizardry of projections, stage fog, or elaborate scenery that a larger company might employ, Young is emphasizing actor-centered values.   She sees the two ghosts in James’ spooky, psychosexual tale as “distinct characters.” The dead move more slowly and “abstractly “ than the living, whom they can approach but never touch. Young’s “naturalistic” direction is meant to portray Peter Quint and the ex-governess Miss Jessel as “humanly as possible” on their own post-mortem terms.

Yemonja Stanley, who is playing Miss Jessel in this production, said she welcomes the opportunity. “I don’t have to make huge reactions. I can do it with my eyes and make other, subtler choices.” As for the music, Stanley said, “I don’t need to blast,” then amended that with a laugh: “Not that I’d ever do that anywhere.”

Cast in the lead role of the beleaguered Governess, Kelly Rubinsohn echoed Stanley’s fondness for opera in smaller theaters. In the score’s softer passages, she said, “pianissimos can be especially delicate.”

Asked if the closeness of the audience can sometimes be intimidating, Rubinsohn recalled one stomach-dropping moment in a Black Box Baroque production of Handel’s Ariodante at the Exit Theatre. “I made my first entrance, and there was my voice teacher sitting right there in the audience.  It took a moment, but then I was fine.”

Young had her own "ah-ha!" moment after directing a Waffle Opera production of Don Giovanni at the 140-seat Creativity Theater in the Yerba Buena complex last fall. Her “full orchestra” had nine musicians. The set featured minimal furniture and a wine bottle. Recalling the finale in which her Don leapt onto an Ikea table to sing his lines, Young smiled. “That’s what you do when you don’t have enough money to do period.” But she also saw limited resources as an asset and knew, after that Mozart production, that she was hooked and wanted to launch a small company of her own.

In doing so she taps into a well-established alt-opera tradition in the Bay Area that dates back to Donald Pippin’s Pocket Opera and includes such diverse companies as West Edge Opera, Festival Opera, Opera Parallèle, and Black Box Baroque.

Reconnecting with friends she had made as a student at the San Francisco Conservatory of Music, where she now works, Young assembled a board of directors, secured nonprofit status via a fiscal sponsorship by the Actors Alliance of San Diego and set about planning a first production. Renting space in San Francisco – even rehearsal space in a church – she soon discovered, is very expensive.

The Turn of the Screw is budgeted at $5,000, half of which was crowd-funded. Allocating $3,000 for artists’ salaries, Young had little to spend elsewhere after the money earmarked for rehearsal and performance space. The antique table in the show is one her father drove down from Oregon.

A veteran of small-scale productions, Young said the first consideration is always whether an orchestra will be possible. When adding a harp and timpani at Stage Werx proved unfeasible, for space reasons, she settled on piano accompaniment only for Turn. Like many shoestring start-ups, Opera Theater Unlimited is a group effort. One of her board members is a choral singer and experienced publicist. Another is a soprano who works for a ticketing company.

Like many shoestring start-ups, Opera Theater Unlimited is a group effort. One of her board members is a choral singer and experienced publicist. Another is a soprano who works for a ticketing company. The group’s Conservatory connections led to some donated rehearsal space and time.

Young and her colleagues are mulling a musical for the spring and hope to produce a least two shows a year. For now, attention is tightly focused on the cunning twists and musical challenges of The Turn of the Screw.

In a run-through of the first act, Young hopped up from time to time to move a table or  chair. “We don’t have the stagehands here,” she explained in a whisper, as the action wound on under music director Tyler Catlin’s baton. Small details in the blocking, like having the Governess turn upstage with her back to the audience at Peter Quint’s first appearance, registered forcefully. The audience would receive the little shock of it right along with her.

At the end of the act, a mounting ensemble for all six voices, the sound filled the Center’s rehearsal tiny space and then some. It was almost frightening, all that vocal and dramatic energy. But then The Turn of the Screw is supposed to get under you skin and get you shivering. Opera Theater Unlimited is doing everything it can to make sure that happens.